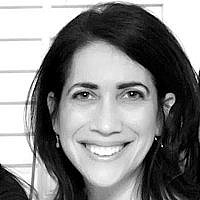 The Blogs
Shifra Goldberg
Apply for a Blog
Advertisement
Please note that the posts on The Blogs are contributed by third parties. The opinions, facts and any media content in them are presented solely by the authors, and neither The Times of Israel nor its partners assume any responsibility for them. Please contact us in case of abuse. In case of abuse,
Report this post. 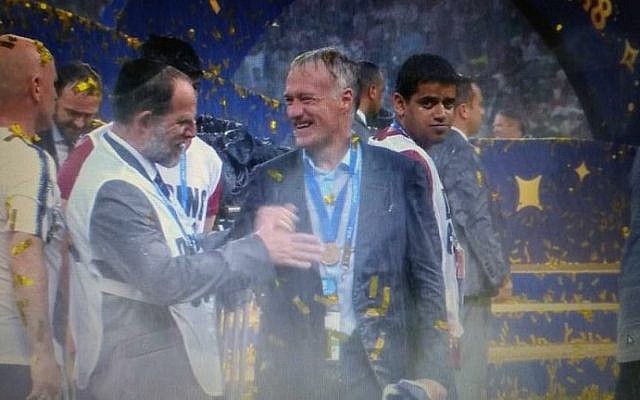 It was impossible to walk around Tel Aviv during the past few weeks without seeing outdoor screens set up in all the neighborhood bars.

One of my favorite viewing spots had about a dozen screens, including three movie theatre sized displays planted into the sand on the Mediterranean beachfront.

Cheers and jeers could be heard in the streets of the city as bars screened the 31 day festival of football known as the FIFA World Cup.

One thing is immediately clear, Israelis enthusiastically joined the billions around the globe that watch the iconic tournament, which is not as popular in the U.S.

Flag waving is so prevalent at the World Cup, that FIFA officially bans more than two dozen flags, including the ISIS flag.

So it’s no surprise that the stadiums in Russia were awash in color from spectator flags.

Not to be left out of the flag party, Israeli fans who traveled to Russia to watch the World Cup, (even though Israel didn’t compete) brought their own flags. Because, Israelis 🙂

Watching games at the bar, spotting an Israeli flag among the tens of thousands of spectators quickly became a fun pastime. It wasn’t long before the Israeli Flag version of Where’s Waldo went viral on social media.

The 200,000+ member Facebook group Secret Tel Aviv was blasted with posts celebrating capturing a glimpse of the Israeli flag at the World Cup

One eagle-eyed Israeli fan even spotted a flag displaying the familiar blue logo of Israel’s national bank and posted the screen grab with the entertaining caption:

when you can’t find your flag and the flight leaves in 30 minutes.

After 64 matches over four weeks, nearly half the world’s population watched France defeat Croatia in the World Cup final. Victory celebrations began immediately as players and VIPs poured onto the field.

Amidst the manly hugging, gold glitter and champagne showers on the field, I couldn’t help but notice the fleeting image of a kippah wearing man congratulating Deschamps.

Kippahs are rarely seen in televised elite sporting events outside of Israel.

I wasn’t the only one that noticed. Accustomed to spotting the proverbial needle in the haystack, the Israeli flag spotting crowd turned to social media and switched from ‘Where’s Waldo’ to ‘Who’s Waldo’?

Theories included suggesting he may be a Russian oligarch (where is Roman Abramovich?), a Chabad Rabbi (Chabad is everywhere) and even Mossad (The Mossad is everywhere too 🙂

The real story is much cooler than the online conjecture.

The mysterious kippah-wearing man in the photo is Professor Efraim Kramer. He has the ultimate dream job in sports medicine: Chief Medical Officer of FIFA World Cup 2018.

The scope of the job is enormous. To add perspective, the 2018 World Cup covered 12 venues in 11 host cities. For the 2018 tournament, Kramer led a team 250 medical personnel who worked with local organizers to provide emergency support to the teams, delegations, guests and spectators.

The medical director role also presides over anti-doping operations, which explains the white vest Kramer was wearing at the final game.

This observer (that me) speculates that the appointment of a well respected straight shooter like Kramer appears to be FIFA’s attempt to keep doping scandals out the 2018 tournament in Russia.

Kramer was appointed by FIFA as Chief Medical Officer at end of 2016 following the abrupt departure of his predecessor who held the position for 22 years. (There is a story there.)

In 2008, the Witz University Sports Medicine center he led was accredited as FIFA Medical Centre of Excellence. His medical involvement with the World Cup dates back to the 2010 tournament held in his home turf: South Africa.

Before being appointed to the top medical job at FIFA, he had been active in the organization as a medical director and lecturer setting the international standards and norms for football emergency medical services.

A little digging reveals Professor Kramer is clearly the MVP of emergency medicine with specialities in both disaster and sports medicine.

Through RSA, he led a 50 person team to Japan in 2011 following the Tsunami so powerful, it set off a nuclear accident and claimed ~15k lives. The search and recovery mission was complicated by scope, toxic water and even unseasonably frigid weather. Throughout the mission, he took care to monitor the crew’s psychological well being.

Kramer’s compassion is evident from his instructions to his team to recover even a fingernail, understanding how the importance of recovery of even the smallest body part is critical in Japanese culture.

Similarly, he had previously aided in the 2010 Haiti earthquake, an experience so intense he has said it took him 4 weeks to recover from.

Professor Kramer has established himself as a global cardiac authority in sports medicine, publishing numerous papers (many with his FIFA predecessor) that focus on the origins, management, and prevention of sudden cardiac arrest in sports and football in particular.

Lecturing and training around the globe, he demonstrates real cleats on the field understanding of cardiac sports medicine. He put theory into practice with his impassioned demand for defibrillator use. The standards he introduced dramatically shortened response time to cardiac incidents which he concisely defined as a non-contact collapse.

Ever practical, he addresses the gaps between what science says, what can be taught and what people actually do while balancing ethics in emergency medicine.

By creating precise standards and overturning old rules that demanded medical team wait for referee permission before stepping onto the field, he has created new life-saving standards in use around the globe. He is saving lives!

Shabbat and Shalom at The World Cup

In a recent interview in the South African Jewish Report, Kramer revealed some of his experiences as a practicing Jew during the 2018 FIFA World Cup.

During the tournament, he spent the entire Shabbat recharging in his Moscow hotel. Kosher food was regularly delivered to his hotel. Kramer was pleasantly surprised when he was greeted by secular-looking Russians who greeted him with “shalom aleichem.” He shared that he has been in contact with “every single Jewish community” throughout Russia.

These days, when he is not traveling the world for FIFA, Kramer spends half days learning in a Johannesburg Kollel.

In sum, Kramer is a mensch. A Golden Boot Winner for sure. His dedication to teaching and training is laudable. I am beyond impressed at his ability to maintain such a high profile job while always (and I rarely use absolute terms) coming across as modest while flying under the radar.

Thanks Secret TA for providing me with the material to play investigative journalist. Time to go back to FB trolling.

About the Author
In an internet filled with noise, Shifra Goldberg shares opinions and observations in short sentences with strong verbs.
Related Topics
Related Posts
Comments