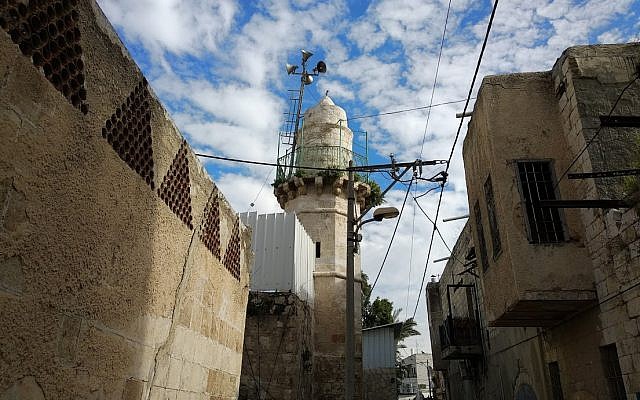 The Mosque of Huzaifa ibn al-Yamani as photographed from in front of the church. (Bill Slott)

During the final years of the 18th century, Napoleon Bonaparte invaded the Middle East. His plan was to conquer the coast from Egypt to Syria, continuing overland to India, and in so doing, break the British naval trade monopoly. In a stunning series of victories, he took Alexandria, Gaza and Jaffa. At that point he occupied Ramla, the city founded a thousand years earlier by the Umayyad Caliphate, where the road from Jaffa to Jerusalem intersects with the road from Cairo to Damascus. Napoleon took up residence briefly in the Church of St. Nicodemus, which still stands proudly today with its bell tower and splendid cathedral.

The general was given the finest room in the building, with windows opening in all directions to let in the cool night air. But he was awakened by the chanting of the muezzin, calling the faithful to the mosque for pre-dawn prayer in what was then, as now, a city of many religions. To this day, a mere stone’s throw from the church is the mosque of Huzaifa ibn al-Yamani, named after one of the companions of the Prophet Mohammed. From the city market you can see both the church tower and the minaret in close proximity. Anyone who has spent a night in a city with a Muslim population knows that before the first light the plaintive chant of the adhan can wake you up with its drawn-out opening “Allahu Akhbar.” Waking people up, after all, is the point. But not to the “little colonel’s” way of seeing things. He rose from his bed, grabbed his pistol, took aim from his well-appointed window in the church, and shot the muezzin, who died on the spot.

This, at least, is the tale told by everyone who is anyone in Ramla, from the vendor selling pistachio nuts in the market to Dr. Shimon Gat of Bar Ilan University, a scholar of Ottoman Era Palestine. In any event, the anecdote is consistent with Napoleon’s often monstrous treatment of the locals in the Middle East, and he was remembered bitterly by the Muslim population of Ramla. Liberty, fraternity, and equality may have been fine for inspiring the masses back in France, but a sleep-deprived Napoleon was clearly capable of war crimes.

Ramla is still a multi-hued mosaic of a city, with Jews from many cultures, Christians from many sects, and Muslims with a thousand-year pedigree in the city still rising before dawn to the chanting from the minarets. An off-the-beaten-path destination to be sure, Ramla boasts antiquities, colorful markets, storied houses of worship, underground rowboats in the 1,200-year-old “Pool of the Arches,” and an original painting by Titian above the altar of the Franciscan church.

But the story of Napoleon and the muezzin underscores the massive amount of history in this country. It is not enough that this tiny sliver of land witnessed pharaohs, prophets, kings and leaders with names like Abraham, Jesus, Mohammed, Herod and Alexander: It was also visited by the decidedly non-Levantine Richard the Lionhearted, Mark Twain, Martha Stewart, Hulagu the Mongol Khan… and in 1799, that French general whose armies a decade later would march into Moscow.

What is it about this land that makes it one of the most visited places on earth for the past 5,000 years? For a person of faith, the answer is in heaven. For a historian, there is a simple geographical explanation: this is the land that connects Africa with Eurasia, with only 200 miles separating the Indian Ocean from the Atlantic Ocean. Any ruler from one continent, who wanted to conquer, trade with, or learn from the adjoining continent, had to travel through Canaan. Thus, here were born two of the building blocks of Western civilization, the alphabet and monotheism, which gets us back to religion, of course. It always comes back to God in this country. The bullet with which Napoleon shot the muezzin traveled from a church to a mosque, from one place of worship to another.

It is high time that we learned to put our places of worship to work making the world a more peaceful place instead of a shooting gallery. Meanwhile, a 25 minute drive southeast of Tel Aviv, Ramla is a hidden wonder of diversity, good food and remarkable history. 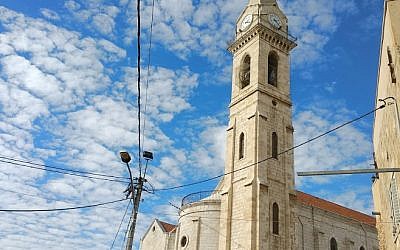 The Church of St. Nicodemus as photographed from in front of the mosque (Bill Slott)
About the Author
Bill Slott is a licensed Israeli tour guide who has hiked and biked the length and breadth of the country. Bill is a member of Kibbutz Ketura, where he has lived since 1981 with his wife and three daughters.
Related Topics
Related Posts
Comments