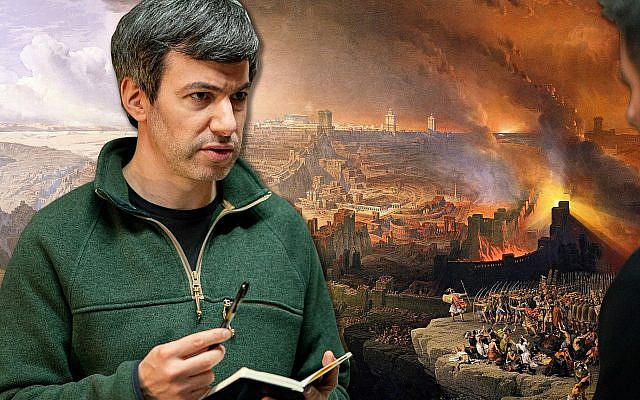 Nathan Fielder, the creator of 'The Rehearsal' (courtesy of HBO). 'Siege and Destruction of Jerusalem by the Romans,' 1850 painting by David Roberts. (Wikipedia) (JTA collage by Mollie Suss)

JTA — Ah, summertime. A season to take a plunge in a mountain lake, read a trashy novel on the beach and reenact a historical tragedy through a month-long pageant of self-denial and fasting.

If you don’t associate summer with performances of communal grief, you may not be familiar with Tisha B’Av. The Jewish fast day, which began last night and continues until sundown, is a ritual of lamentation for the destruction of the First and Second Temples in Jerusalem, and the culmination of a three-week period of gradually intensifying mourning rituals: no haircuts, no new clothes, no meat. The day has become a metonym for the larger sweep of historical Jewish suffering.

That it falls in the middle of a North American summer can be a problem for Jewish camps, where rules forbidding swimming and other expressions of pleasure — especially during the climactic “Nine Days” of mourning before the fast — make it a major buzzkill. Others have asked if the mourning for Jerusalem is still relevant when the city has been reclaimed as the capital of Israel.

What I find challenging about Tisha B’Av is its artificial imposition of grief. With all the real tsuris in the world, why would we intentionally afflict ourselves over a calamity that happened 2,000 years ago? In a very different context, roots musician Rhiannon Giddens made a similar point this week on PBS NewsHour, when she was asked how she can make art in awful times: “It’s kind of like, yes, it’s all going to hell in a handbasket. Therefore, we need to make every day the best day that we can make.”

Tisha B’Av says we need to make today the worst it can be. “The underlying experience that the individual should live through is that of a first-century Jerusalem defender who goes through the siege from inception to becoming a prisoner of the Romans at the climax,” writes Rabbi Yitz Greenberg, explaining the history behind and experience of Tisha B’Av in his book “The Jewish Way.”

Yom Kippur similarly demands this sort of playacting in search of religious enlightenment: The day has been described as a rehearsal of our deaths, during which we deny ourselves food and sex, dress in clothing reminiscent of a shroud, and literally prepare to meet our Maker. The intended effect is straight out of “A Christmas Carol,” in which Scrooge’s glimpse of his miserable afterlife inspires him to repent, or the famous story of dynamite inventor Alfred Nobel, who got a chance to read his own mistakenly published obituary. Aghast that he would only be remembered as the creator of a weapon of mass destruction, Nobel established the prizes that honor human achievement.

Greenberg suggests a difference between Yom Kippur and Tisha B’Av, and his interpretation softened my resistance to the fast day. Unlike Yom Kippur, when our fates are uncertain, we know what is going to happen on Tisha B’Av. “Thus, the sense of doom and grief builds up before the day actually arrives. The day of destruction is a culmination of the grief, but immediately thereafter — since nothing can be done to prevent the tragedy from happening — the psychological balance shifts toward the renewal of life,” writes Greenberg.

In other words, by reenacting low points in Jewish history, we are able to make the next day the best we can make it — or, as the Talmud explains, “All who mourn [the destruction of] Jerusalem will merit to see it in its joy.” (Ta’anit 30b)

The effect is like cognitive behavioral therapy, which helps people unlearn patterns of unhelpful behavior, such as deep-seated anxiety. One CBT technique asks people to play out worst-case scenarios so that, as one CBT website explains, “even if everything he or she fears comes to pass, the outcome will still be manageable.”

The new HBO reality series “The Rehearsal” seems to be based precisely on this premise. Created by the deadpan Jewish comic Nathan Fielder, the show helps ordinary people confront a problem by offering them elaborate rehearsals of best- and worst-case scenarios. In the first and most straightforward episode, a man named Cor isn’t sure how to tell an old friend that he has been lying about his educational credentials. Fielder convinces Cor to rehearse the conversation, with an actor playing his friend. The rehearsals are held in an exact replica of the Brooklyn bar where the real-life confrontation will take place.

Critics either love “The Rehearsal” for its wry sendup of reality shows and its surprisingly emotional payoffs, or find Fielder to be smug and disingenuous. But among the many scenes from the first episode that stayed with me was this one: not only does Cor rehearse the conversation, but he goes back to his apartment (actually, a meticulous recreation of Cor’s actual apartment) and imagines two futures: one in which the conversation will go well, and one in which it will be a disaster. The exercise leaves Cor ready to face and overcome his fears.

That, in a nutshell, is Tisha B’Av: We inhabit a painstakingly constructed mental landscape in which the Temples still stand and are about to be destroyed. We are rehearsing tragedy so we might better be able to handle it when it comes for real, and better appreciate our happiness when it doesn’t. 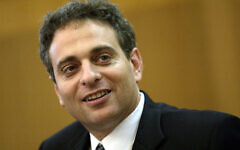