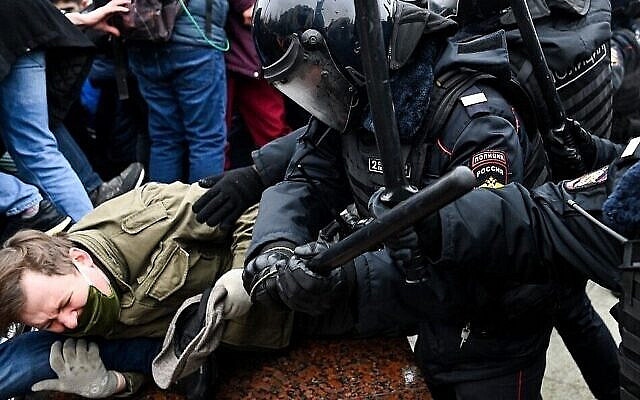 Protesters clash with riot police during a rally in support of jailed opposition leader Alexei Navalny in downtown Moscow on January 23, 2021. Navalny, 44, was detained last Sunday upon returning to Moscow after five months in Germany recovering from a near-fatal poisoning with a nerve agent and later jailed for 30 days while awaiting trial for violating a suspended sentence he was handed in 2014. (Kirill KUDRYAVTSEV / AFP)

Ten days ago, a man told reporters in Moscow that he was tired of being afraid.

The man’s name is Sergei Radchenko. There’s no reason for this name to ring a bell: Radchenko is neither a known leader nor a celebrity of any sort. Yet on Saturday January 23, 2021, this ordinary man did something extraordinary: he risked arrest, injury, and police harassment, by protesting Putin’s regime and the arrest of jailed Kremlin critic Alexei Navalny.

Navalny was poisoned on the 20th of August 2020. He was eventually evacuated to Germany, where he received medical treatment and eventually recovered. On December 21, 2020, he released a video that showed him interviewing one of the men who had poisoned him. Navalny presented himself as a Russian security official, and the man he questioned freely admitted that the poisoning was ordered by the Russian authorities. On January 17th, 2021, Navalny returned to Moscow and was promptly arrested for his supposed violation of his probation — a probation that was part of a 2014 verdict that was already overturned by the European Court of Human Rights.

But Radchenko did not protest merely out of sympathy with Navalny. “I haven’t just turned up for myself and Navalny, but for my son,” Radchenko told Reuters in Moscow. “Because there is no future in this country.”

Radchenko admitted to the reporter that he feels frightened. Yet he protested despite his fear. For Radchenko, his son’s future was worth the risk.

This one decision may seem unimportant in the great scheme of things. Sergei Radchenko does not design policies and his words do not carry the weight of either celebrity or expertise. We do not yet know whether the protests will achieve lasting change in Russia, and even if they do, who can say how one man’s presence will affect the final outcome?

Yet by prioritizing the future over his present security, Radchenko achieved something monumental. Regardless of the final outcome of his bravery, by overcoming his fear, he set himself free.

We often think of freedom in grand, even epic terms. We imagine the Red Sea opening wide, its walls of water forming a pathway to liberty. We think of the moment when one delegate after another signed the American declaration of Independence. We think of a wall being demolished in Berlin.

The power of the tyrants in these images is always physical: Pharaoh’s chariots and army, the redcoats’ bayonets, the barbed wire surrounding the Soviet Gulag. But the true power of tyrants and slaveholders doesn’t lie in their physical tools. After all, millions of people can’t be held down by force at all times. No, the true success of tyrants and slaveholders depends upon instilling terror in their subjects, to the point that the latter will hold themselves down.

My father, Natan Sharansky, remembers experiencing this form of oppression as a young boy, when he watched his parents cut out an entry from their copy of the Great Soviet Encyclopedia. A Soviet leader fell out of Stalin’s favor, and the latter decreed that he should be erased from Soviet history. The regime sent a new entry to every household in the empire, meant to replace the one which they were determined to excise. But it was the citizens themselves who had to carry out this order, cut out the old truths and glue in the new. My father watched his parents doing so, knowing full well that their actions had nothing to do with fact or truth. But they had everything to with their fear for their lives and for the lives of their loved ones. In the name of that fear — and of that love — they obeyed.

Moments like that, and not the prison camps my father would go on to experience first-hand as a political prisoner, were the true arena of the Soviet oppression.

The Soviet Union has fallen. Yet today’s Russian authorities are trying to achieve a similar form of oppression. Frightened by their failure to silence Alexey Navalny, alarmed by the light he so successfully shed on their machinations and cruelty, they are trying to reassert their hold over their subjects. They are trying to frighten millions of people into compliance by punishing the man who became their harbinger of hope.

“The main thing in this whole trial isn’t what happens to me,” said Alexey Navalny on Monday, February 2nd, in his appearance in court. “Locking me up isn’t difficult. What matters most is why this is happening. This is happening to intimidate large numbers of people. They’re imprisoning one person to frighten millions… I hope very much that people won’t look at this trial as a signal that they should be more afraid… You can’t lock up millions and hundreds of thousands of people. I hope very much that people will realize this. And they will. Because you can’t lock up the whole country.”

By going out to protest, Sergei Radchenko broke fear’s hold upon his psyche, and with it, the true perch of Putin’s power. As thousands of his fellow citizens make the same decision, often facing arrests and fines and brutality, their personal liberations gather momentum, making political liberty possible as well.

But their success depends on more then their personal courage. If there is anything I learned by growing up surrounded by the veterans of the struggle for Soviet Jewry, it is that dissidents need help. If world Jewry had not kept my father’s name in the headlines and on the agenda of their elected officials, the KGB could have easily let him “accidentally” die in his cell. After all, as his KGB interrogator told him once in Lefortovo prison, “We don’t let heroes leave Lefortovo alive.” Other dissidents — ones who did not have the Jewish people to fight for them — were not as fortunate. By ignoring their plight, the world allowed them to be made to disappear.

When Navalny chose to return to Russia after surviving his poisoning, he placed his life in Putin’s hands; but even more so, he placed his life in our hands. When Sergey Radchenko placed took to the streets to protest, he did the same. Now it is up to us to keep the world interested and invested in the outcome of this drama. It’s up to us to make it so that the Russians authorities would not dare to act upon their threats.

Write to your elected officials. Share Navalny’s speech on social media. Make his plight the subject of your conversations with the people in your lives. If people like him and Radchenko and their fellow protesters were able to act despite the real dangers to their physical safety, let it be said that we acted despite our natural preoccupation with our own concerns and lives. Let it be said that when we saw others fight for freedom, we did not — we would not — turn away.