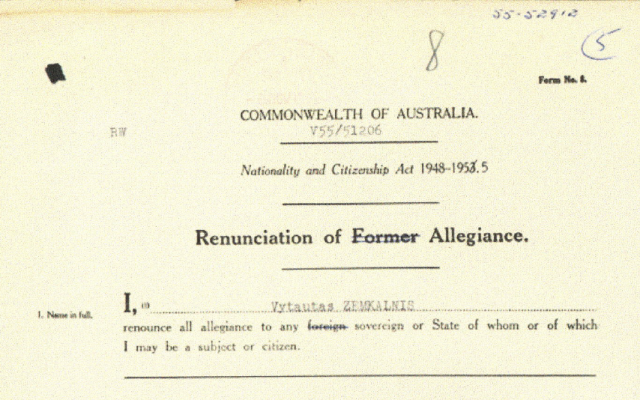 Isn’t it interesting? The Lithuanian who had been ready and, in fact, very happy to torture and murder thousands and thousands of innocent people due to their “wrong” ethnicity, the Lithuanian who signed the Act on nationalization of all Jewish property during World War II, renounced to his Lithuanian nationality. I find this funny.

However, there is something unexplained in the story of Nazi criminal Landsbergis.

In June 1941, Landsbergis gave oath to Adolf Hitler and became a Minister of Infrastructure at the Lithuanian Nazi Government. Landsbergis became the chief governor of the “Jewish Concentration Camp”, and he signed the Act on nationalization of Jewish property. Moreover, he voted to appoint another Holocaust perpetrator Jonas Noreika to the position of governor of the Siauliai Region. Thus, Landsbergis is also responsible for the massacres of Jews by Noreika.

By the end of the war, Landsbergis flew to Australia, and renounced his Lithuanian nationality.

Guess what happened next.

30 million Soviet nationals died in the WWII. This was a sufficient reason for the Soviet authorities not to like Nazis. However, they loved Landsbergis.

The only logical explanation of this love of the Soviet Union is that Landsbergis was a KGB spy.

Apparently, Landsbergis started to cooperate with the KGB. He became their spy within the Nazi authorities of Lithuania. Then, the KGB needed him as a spy among thousands of Lithuanian immigrants in Australia.

He renounced his Lithuanian nationality, because the KGB needed that.

This is the only reasonable explanation of Landsbergis’ successful career in the Soviet Union after being a Nazi Minister of Infrastructure during the WWII.

About the Author
Lawyer ranking # 4 in the World according to the number of non-serial & non-personal cases won before the United Nations Human Rights Committee and other UN judicial bodies during the last 7 years, professor of law at the Russian New University (Moscow), Eurasian Academy of Law (Almaty), Narxoz University (Almaty). PhD in law of the University of Paris I Sorbonne. Lawyer no. 116 at the Russian Foreign Lawyers Registry.
Related Topics
Related Posts
Comments