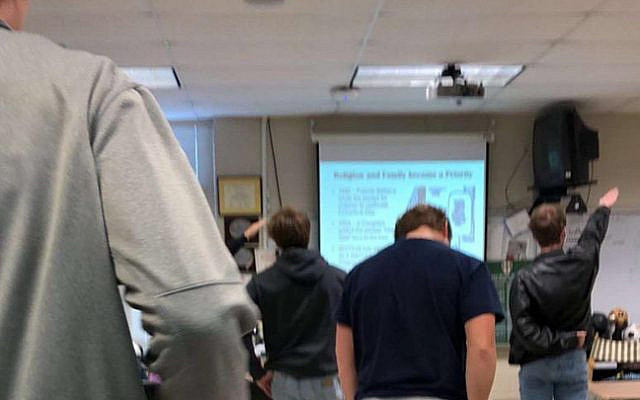 Facebook screenshot of the incident posted by one of the students.

Imagine a classroom full of high school students standing in front of a flag and raising their right hands, in unison, outstretched with palms facing down – the classic Nazi salute. Imagine the teacher is the one who instructed the students to do this. Imagine that the classroom has only one Jewish student, who along with others refused to do the salute, and that student is the only one punished afterwards. Sounds like something out of 1930s Germany, right?

Wrong. This is what reportedly occurred only days ago at Mountain Brook High School just outside of Birmingham, Alabama. If you are currently scratching your head and wondering, “Mountain Brook schools and antisemitism, why does that sound so familiar?” it might be because they made headlines across the state, and even the country, two years ago when students were caught on video with swastikas drawn on their backs. Or it might be because last fall they made headlines once again after ending training with ADL (the Anti-Defamation League), the preeminent century-old organization fighting antisemitism, citing as their excuse “divisive concepts” in the diversity training.

There are so many aspects of this story that are deeply disturbing, but most disgusting is the apparent reaction from the school – revealing a systemic issue that threatens the local Jewish community and the entire community as well. When the sole Jewish student in the school reported the incident, he was not met with understanding. The teacher was not disciplined. ADL or any other organization that might be able to help address the issue never received a call. Instead, the student was reportedly told, “If this blows up there will be more disciplinary action, because you are making Mountain Brook look bad.”

Wait, disciplinary action against the sole Jewish student because he spoke up about an antisemitic incident in a public school system? Yes, you read that correctly. According to the student’s parents, Assistant Principal Jeremy Crigger insisted their son apologize to the teacher, Joe Webb, who apparently is also a coach. Furthermore, the student was forced to move desks – closer to the teacher – and was not allowed to use his phone anymore when other students still could. It is important to note, at this point, that the salute was caught on tape using a smartphone camera by another student and that the Jewish student was reportedly disciplined after refusing to identify who recorded the incident.

Rather than recognizing the trauma this poses to the Jewish student, the Birmingham Jewish community, and society writ large, the school went into cleanup mode. It wasn’t the Nazi salute, seems to be the company line, it was the Bellamy salute. Let’s be clear about what the Bellamy salute is – it is a severely outdated flag salute that ceased being used around 1940 because it precisely mimics the Nazi salute up until the end when palms get rotated upward. We no longer teach the Bellamy salute precisely because of the Nazi salute and instead place our hands over our hearts to honor our nation and our Flag. It is a relic of the past and has no place being taught in our school systems.

Rather than doing damage control, what the school should be doing is taking meaningful action. An outside investigation should begin immediately, and appropriate action should be taken to hold anyone responsible accountable. The student should not be disciplined, but instead lauded as a profile in courage. And serious efforts must begin to make amends.