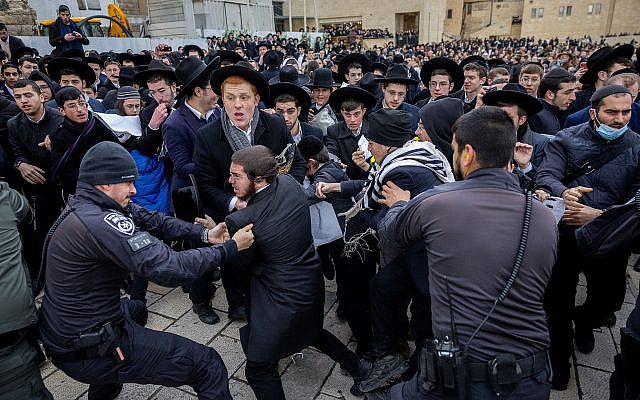 Haredi ultra-Orthodox Jews scuffle with police as they protest members of the Women of the Wall movement holding Rosh Hodesh prayers at the Western Wall in Jerusalem, March 4, 2022. (Yonatan Sindel/Flash90)

“Nazis!” “Heretics!” “Whores!” This is the chorus of hatred that my colleagues and I hear every Rosh Chodesh, marking the start of a new Hebrew month.

Two weeks ago, Rosh Chodesh Tammuz, the same vile rhetoric was hurled at Jews praying in the egalitarian (Ezrat Yisrael) section of the Kotel during B’nei Mitzvah ceremonies, garnering international headlines. Countless articles, op-eds, and calls to action were published. Deborah Lipstadt, US Envoy to Monitor and Combat Antisemitism, even commented on the incident, calling it “deeply disturbing.”

At Women of the Wall, this is nothing new. We’ve faced this baseless hatred for over 33 years. We are sadly accustomed to being surrounded by fellow Jews who want us to shut up, get out, and even die, just for the way we pray.

Who could be shocked by the international coverage? What the world witnessed in Ezrat Yisrael was truly horrific. For those who do not closely follow the monthly attacks on liberal Judaism at the Kotel, it was startling to see footage of ultra-Orthodox boys disrupting families at B’nei Mitzvah ceremonies. The violent attacks included kicking and destroying prayer books. One agitator even blew his nose into the torn pages, while laughing, on camera.

This horrific incident highlighted how dire the security situation has become in Ezrat Yisrael. With no real security checkpoint at its entrance, these teens were able to easily enter with the sole purpose of disrupting and attacking prayer services. As the egalitarian section operates today, guards and police are not able to prevent rioters from entering. What is stopping someone from bringing a weapon into this sacred site? As someone who regularly receives death threats, this is extremely alarming. And people wonder why we at Women of the Wall don’t just pray in Ezrat Yisrael. Rosh Chodesh Tammuz demonstrated exactly why.

At Women of the Wall, we have long fought for enhanced security, and of course, creating a dignified egalitarian prayer space at the Kotel. It is worth noting that some of the attackers from Rosh Chodesh Tammuz were the very same kids who tore 39 Women of the Wall prayer books exactly a year before. The recent attacks may have finally exposed the urgency for heightened security to the larger Jewish world. And what perfect timing.

On the 17th of Tammuz, we mourn five tragedies in Jewish history, most notably the breach of the Temple walls in 70 CE. On this day, we start the Three Weeks, culminating in the mourning of the destruction of the Temple. The reason for this destruction, we are taught by our sages, was sinat chinam (baseless hatred) amongst Jews.

2,000 years ago, Jews attacked one another for being the “wrong” kind of Jews. Today, at the remains of the Temple, Jews are called heretics, animals, and worse. Radicalized groups of ultra-Orthodox teens justify destroying our prayer books by saying that our Jewish practice is “wrong.” History really does repeat itself.

The current situation is what happens when a small fraction of Jews view a significant portion of Jews as non-Jews. Not only non-Jewish, but something evil and subversive, trying to destroy “authentic Judaism.” These “non-Jewish” Jews, interestingly enough, make up the majority of Diaspora Jewry. So as Jewish communities around the world read about what happened in the egalitarian section two weeks ago, they receive a disturbing message – the Jewish State will not protect them when they come to Israel to worship at our holiest site.

When children are taught that Conservative, Reform, and modern-Orthodox Jews are heretics for engaging in egalitarian worship, of course violence will ensue. What happened on Rosh Chodesh Tammuz, and what happens every Rosh Chodesh, is the predictable outcome of an educational system which teaches that egalitarian Judaism is akin to Nazism.

Until the extreme ultra-Orthodox sector learns to see and respect all Jews as Jews, there will be a small but vocal minority that takes no issue with attacks like this most recent one. Who exactly is engaged in baseless hatred? Who defiled Judaism? The Conservative teens from America who dared to read from the Torah in a mixed-gender setting? Or the ultra-Orthodox boy who blew his nose into the holy words?

This 17th of Tammuz, the same boys and girls who kicked, spat on, and tore up the prayer books of fellow Jews this past Rosh Chodesh will be fasting, as a way to repent for the past mistakes of the Jewish people. They will hear from their rabbis that baseless hatred led to the destruction of the Temple. They will pray for the Temple to be rebuilt, at the very site where they so recently attacked Jews.

This irony demonstrates our unacceptable reality. Growing up in Israel, I’ve heard all my life that Jews are a family. So to see this group, so radicalized that they attacked people who could have been their own grandparents, cousins, and siblings, is a true tragedy.

Perhaps the most depressing irony on this 17th of Tammuz is that these same teens will come back next Rosh Chodesh and behave in exactly the same way. A mere two weeks after their fast, they will come in droves to protest against the “Nazis” – the peaceful group of women who come to pray at the Kotel to celebrate the new month. Based on my years with Women of the Wall, I know this to be true. Until there are consequences for such violence, extremists will not stop attacking us and other liberal Jews.

About the Author
Yochi Rappeport is the executive director of Women of the Wall. She was born and raised in the Orthodox environment of the Safed Old City. Upon turning 18, Yochi joined the IDF and served as a commander in a course for Judaism and Zionism for soldiers who aren't Jewish and new immigrants. Following her service, she studied Political Science and Middle Eastern studies at Bar Ilan University, and then served as an executive assistant at an Israeli news agency. Realizing she wanted to be a part of something more meaningful, she happily started working for Women of the Wall in 2016, as director of Education and Community Outreach. Today, Yochi lives in Jerusalem with her husband and daughter, where they live an open-minded and feminist Orthodox lifestyle.
Related Topics
Related Posts