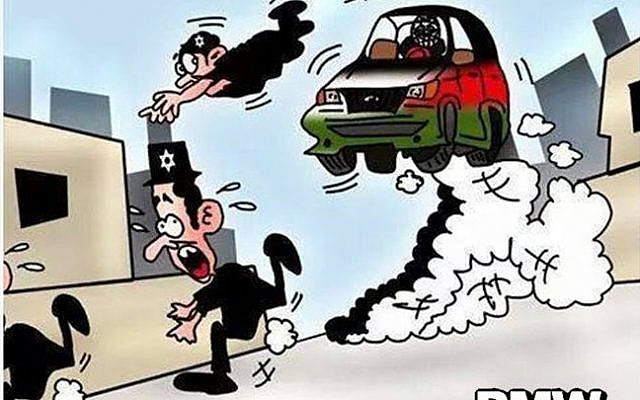 A screenshot from a cartoon published on the Facebook page of the Fatah movement depicting three Jews fleeing as a car driven by a Palestinian tries to run them over, November 2014. (Originally appeared in TOI, Nov 7, 2014)

Why is so much left out of reporting about Israel at the same time that these stories spread around the world as big news?

It looks like it just happened again: a car-ramming attack. There have been over 80 such attacks in Israel in the past five years. It’s a terror method that has been copied by ISIS.

Associated Press and Reuters don’t discuss the frequency of these attacks on Israelis or the praise and rewards Palestinian leadership gives to attackers. Instead, they describe Israeli border guards shooting a young man, who his relatives say, was just driving to a wedding.

For some reason, the stories also include mention of ongoing discussion about “annexing” Israeli towns in the West Bank.

So far, only the Israeli and Jewish press has reported that there is a relevant video made prior to the incident by Ahmed Erekat in which he describes “shame” at being accused of collaborating with Israel and bringing “dishonor” to his family.

News stories don’t mention that about a month ago there was a car ramming at this same spot. After the crash the perpetrator jumped out of his car and stabbed a soldier.

CNN headlines their story: “Video Shows Palestinian Man Shot at Israeli Checkpoint.” Yet you can see in the video that there is a line of cars at a standstill when Erekat carefully pulls out far to the left side of the road and then turns the car sharply to the right speeding directly into a guard, sending her flying through the air. It sure looks like a deliberate car ramming.

Erekat was running toward the guards when he was shot. Though medical help arrived within minutes, he didn’t survive. The border guard, Shani Or Hama Kodesh was injured and taken to the hospital and is recovering. She said Erekat looked her in the eye and aimed for her, a detail that can be found in the Times of Israel and other Israeli news sites. But not, for instance, at Sky News that labels the event “Israeli Guard Kills Relative of Top PLO Negotiator Saeb Erakat.”

Rutgers University professor Noura Erakat has been posting on Twitter that her “young cousin” is a victim of “dehumanization.” She is a well-known anti-Israel speaker who advocates for the end of the Jewish state.   Her posts are praised and supported by Congresswoman Rashida Tlaib.

I call it the Frame of the Neighborhood Bully. Regardless of current actions or recorded history, the bully is always in the wrong, as Bob Dylan described in his song about Israel in 1983. If there is any conflict, the stronger party, even though vastly outnumbered is always at fault no matter the circumstances.

In more academic terminology, Israel is considered the oppressor in every situation. The rhetoric of victim and oppressor gets in the way of even attempting to see events here clearly.

Of course this does not mean that Israel is always right, either. Rather, it means there is little room for reasoned discussion of what happens in Israel.

The journalists I’ve quoted may or may not be promoting their own views of Israel. But they are presenting the news in a predictable format, one in which getting at all the facts is subordinate to following an expected storyline.