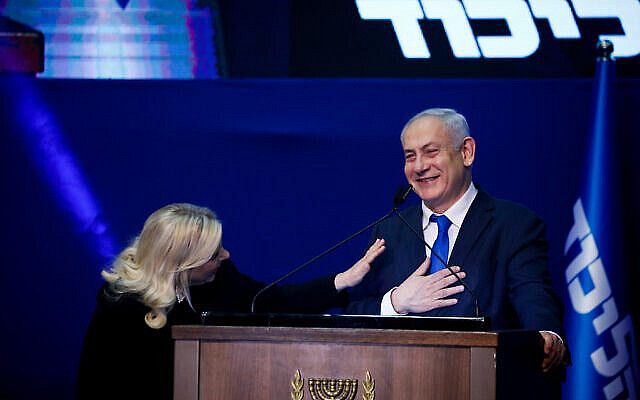 There are few concepts more fuzzy in the world than victory in an Israeli election. Blue and White claimed a decisive victory in September and yet, to no one’s surprise, Benny Gantz did not spend a day since as prime minister. It is because of the proportional representation system that requires a majority to be generated by a desperately fractured electorate.

Now it is claimed that Benjamin Netanyahu won Monday’s election. Clearly some people think he did – but under existing rules he did not. According to almost total counts and exit polls, his bloc of parties won either 58 or 59 of the 120 seats. Even if that ends up at 60 when all is said and done, as seems possible, he will not have “won.”

The other parties are not a cohesive bloc because Avigdor Liberman hates the Joint Arab List and so they will all struggle to collaborate. But nonetheless, parties that made it clear that they want Netanyahu gone, and will not serve under him, may well have won a majority.

It can hardly be overstated how much the primary issue of this campaign was whether Netanyahu should continue as prime minister. That is not a point of pride for a country that faces critical and complex issues, but is nonetheless the case.

Netanyahu became the issue because of the extraordinary fact that he is about to go on trial on charges of bribery, fraud and breach of trust, yet clings fanatically to his office. Most prime ministers with any grace would resign. Indeed, 11 years ago Netanyahu himself called on Ehud Olmert to resign because of a police investigation; Olmert was no saint, and is now an ex-con, but he was mensch enough to step aside. Netanyahu, many steps down the perp narrative, facing three severe charges handed down by his crony attorney generally of all people, epically is not.

But if the current numbers hold up Netanyahu did not “win,” and in a way he lost. Most plausibly the election in effect was another form of hung parliament — the third in a row.

And all that needs to happen for Netanyahu to be ousted is for Liberman to put aside his hatred of the Joint Arab List – his silent partner in the anti-Bibi camp – and join it along with Blue and White and Labor in bringing Netanyahu down. In the calculus of hate that is politics in the democratic world today, he needs to decide he despises Netanyahu more than the Arabs. I think it is a close call, but no one can know the soul of Liberman, a man who a decade ago himself avoided prosecution with the aid of witnesses who vanished or died.

I am not predicting Liberman will do this, and I would not bet Netanyahu does not find a way to soldier on – but I do think it would be poetic justice that would be good for Israel.

It would be a beautiful comeuppance justly earned by Netanyahu through his incitement against both the Arabs and the left, and even of Liberman, who has of late been accused by Likud stooges of being an anti-Semite. The outgoing campaign was made so ugly by Likud that the keyboard blushes at the very thought: rabbis secretly recording aides of opposition leader Benny Gantz, internet rumours of infidelities and implications of dementia were all key elements in an orchestrated and blood-curdling electoral hellfire.

Still, the discourse has taken root that Netanyahu won. What is this based on?

It is based on the apparent fact that the Likud party itself won more seats – perhaps 36 to Blue and White’s 33. That is because Netanyahu successfully siphoned seats from Yamina, the party to his right. But these seats stay within the right-religious bloc, which is all that matters, and so it all nets neutral. Likud’s lead over Blue and White as individual parties essentially means nothing.

Netanyahu would be the first to argue this if the tables were reversed. Indeed that is precisely what he did in 2009 when Blue and White’s predecessor Kadima had more seats as a party but the right bloc was bigger. He did not waver then for a second, and he was right. That is why he succeeded Olmert as prime minister.

Right now, Likud is hard at work trying to hammer home the narrative that the size of the party does matter and is decisive – which is akin to Hillary Clinton in 2016 claiming victory on the strength of the popular vote.

It is nonsense, and yet broadcast journalists in Israel, who are the oracles of their time and place, are playing along. Journalists in Israel are supposed to be anti-right, and largely indeed they are, as is the case among educated Israelis of all kinds. Why, then, would they back the lie? Many reasons.

And so on election night the broadcast media reporters fell over one another in declaring Netanyahu’s victory spectacular.

It was a little reminiscent of the US media rushing to agree that Donald Trump was exonerated by the Mueller report – which he was not. But after the first few days’ breathless reporting to that effect, the narrative was set and the facts hardly mattered in the public discourse.

To be clear, I am not saying the opposition did well. Blue and White ran a lackluster,  bloodless campaign that wasted a perfect storm of an opportunity, and there are big questions about whether the opposition bloc can hold together.

Netanyahu, for all his epic faults in the realms of decency and strategic vision for his country, is a brilliant and charismatic man who may be the world’s best globally prominent politician. Even if he has trouble forming a coalition, he may ultimately stay on longer, and maybe even a full term, as prime minister.

But if the current numbers hold true, he did not win. Shame on the media for surrendering to the spin.