The Blogs
Marc Schulman
Apply for a Blog
Please note that the posts on The Blogs are contributed by third parties. The opinions, facts and any media content in them are presented solely by the authors, and neither The Times of Israel nor its partners assume any responsibility for them. Please contact us in case of abuse. In case of abuse,
Report this post. 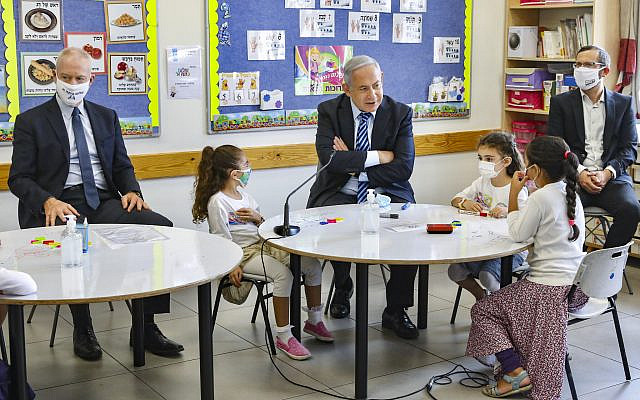 281 Israelis died last week, not from a terrorist bomb, nor from war, but from the incompetence and political cravenness of Prime Minister Benjamin Netanyahu, Minister of Education Yoav Galant, and the rest of the current Israeli government. Many of those who died were elderly, and no doubt would have died in the next five to 10 years. But those are years they will not spend with their grandchildren — grandchildren who won’t have their grandparents at their weddings, and whose lives were cut short by the failure of the government of Israel to protect them. Beyond the deaths, there are thousands whose health will likely be permanently impacted by the long-term effects of a dreadful disease that we still don’t fully understand.

During the second coronavirus wave, Netanyahu has followed policies very similar to those of President Donald Trump in the United States — i.e., push to reopen the economy, and then try to ignore the consequences. But Netanyahu is smarter, more educated, and better read. He understands the science of the disease as well as anyone, and during our initial bout with the virus, Netanyahu acted swiftly and effectively. The prime minister even had an excellent plan to reopen the economy slowly, removing one restriction at a time, and then waiting 14 days to monitor the impact.

Netanyahu initially declared that if the daily infection rate passed 100, he would close everything back down. The only problem: when the country started removing the restrictions in one area, political pressure from all the other sectors became too great to withstand, and Netanyahu — always concerned about the next election — caved and quickly allowed everything to reopen, schools, malls, gyms, hotels and restaurants, and bars.

What followed was predictable, since we had not waited to eliminate the virus before reopening, it swiftly began to spread, again. At the end of May, an outbreak was discovered at Gymnasia Rechavia high school in Jerusalem. 104 students and 15 staff members were soon confirmed to have contracted the coronavirus.

What did the government do? Did it immediately close all the schools? All the high schools? No, the new education minister (whose only qualification for the job was being an army general) decided that schools would remain open. So, the deadly virus continued to spread, but not only did schools remain in session, as the spread of the virus continued to gain momentum, the government gave in to the pressure from owners of event halls and allowed larger weddings (of up to 250 people) to take place.

In no time, the number of verified infected patients began to rise dramatically. Did Netanyahu do what he said and close down parts of the economy again? No, the government managed to crack down on the wedding halls, theoretically limiting wedding to 50 people. They, once again, closed theaters, which they had rashly reopened, even as numbers had been rising again. But amid all this, hotels were allowed to open, and soon were at 100 percent occupancy.

There was an attempt to close the bars, but all the bars suddenly transformed into restaurants. The Ministry of Health tried to close indoor gyms. But pressure from gym operators proved too much, and populist Knesset members (including several from the opposition, which has been no better than the government) applied constant pressure to reopen the gyms. Every sector claimed that since there was no proof that people were being infected in gyms, restaurants, malls, hotels, etc., they should be allowed to open.

The problem is that six months into this pandemic, we still do not know where people are being infected in Israel. We have some of the best computer programmers in the world, many who specialize in big data and AI … and thanks to the intrusive program of having the General Security Service (Shabak) track each of our locations, data exists on everyone who was infected. But to date, no one has used this massive data pool to determine and publicize the most dangerous places (beyond the home where family members infect each other).

So what is the country doing to stop the infection rate and save the lives of our citizens? Very little, I am afraid. The government finally appointed a coronavirus czar last month, who has a limited plan to categorize cities based on their infection level, and enforce restrictions accordingly. But it took three weeks to get that plan approved, and even then, the program is not scheduled for implementation until next Sunday.

One of the plan’s essential elements was not even approved — i.e., not allowing travel in-or-out of those worst-hit towns and cities. The program itself is likely too late, since while certain places have markedly higher infection rates than others, COVID-19 is EVERYWHERE. Tiberias, which is cited in the czar’s coronavirus treatment plan for increased restrictions, has a current infection rate of 441 per 100,000; while Bnei Brak, which is not mentioned, has a rate of 429 per 100,000, making the differences between the locations extremely minor.

Our schools opened Tuesday, coinciding with a record daily number of new infections: 2,180. To accommodate students going to school, buses can now operate at 75% capacity. The army announced that since the rate of infection is down in the military, soldiers can now travel on public buses and trains.

The minister of education, who has been leading the charge to open schools, happily took photos this morning, holding hands with and surrounded by a large group of first-graders. It would seem repeated directives to refrain from touching, or to maintain physical/social distancing appear to be completely unnecessary.

There has been no attempt to convince businesses that are able to work remotely to do so. Most Israelis are now working from their offices as if COVID-19 is gone. Grandparents happily visit with their grandchildren, and small parties seem to happen daily. In short, it looks like the people, and the government have given up. We can fight Arab armies, but its too hard to fight this disease.

While the government is primarily responsible for this debacle, they are not alone. The news media shares in the responsibility, broadcasting endless segments on hotel deals available in both northern and southern Israel, or affordable vacations in Greece, while some commentators still claim COVID-19 “is just the flu.”

Still, all this does not absolve the average person on the street — the ones who wear a mask on their chin, or those who go to parties, bars, and indoor restaurants, and of course, those who insist on holding sizable weddings in the middle of a pandemic — or even worse, traveling to Uman.

By now, the die has been cast — hundreds, or more of us, will die in the coming weeks — and that number could increase rapidly, as our hospitals reach the point of no return. However, by then, it will be too late to effectively intervene. The current government was allegedly created to battle the coronavirus. Yet, up until now, all we have seen is an attempt to evade responsibility and avoid making any difficult decisions.

The time to deliberate has long passed. I implore the government members to wake up — the light you might see at the end of the tunnel is that of an oncoming train. If you do not take action immediately, it will be too late for too many — for hundreds of people and families, it already is.

About the Author
Marc Schulman is the editor of Historycentral.com -- the largest history web site. He is the author a series of Multimedia History Apps as well as a recent biography of JFK. He holds a BA and MA from Columbia University, and currently lives in Tel Aviv. He is also a regular contributor to Newsweek authoring the Tel Aviv Diary. He is the publisher of an economic news App about Israel called DigitOne
Related Topics
Related Posts
Comments