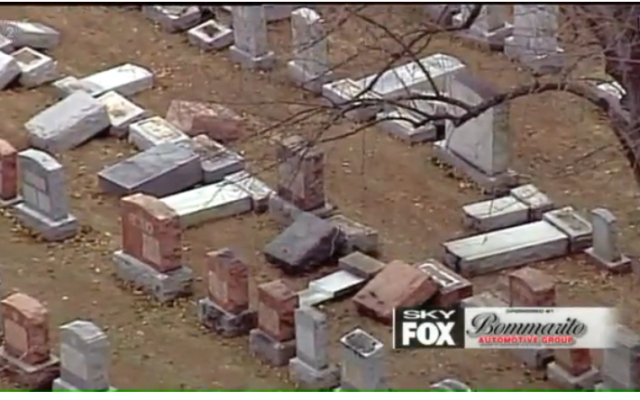 Donald Trump has finally denounced the spate of anti-Semitic incidents that have surfaced in the US since his inauguration. His daughter Ivanka, a convert to Judaism, has done so as well. Their remarks are all the more notable given the silence on the subject of another prominent political figure, Benjamin Netanyahu. While foreign statesmen are under no obligation to comment on domestic American affairs, Netanyahu has styled himself as the leader of world Jewry. As such, one would think he’d feel obligated to defend a Jewish community under attack. The prime minister had the perfect opportunity to do so on his recent trip to Washington but chose to say nothing. Nor can his atypical reticence be ascribed to the discretion of a visiting statesman since in the past he has shown little shyness about wading into US politics.

To the contrary, Netanyahu provided a fig leaf for Donald Trump to brush aside charges that his ascendance has provided legitimacy for a revival of home-grown anti-Semitism, not least through the proximity of his chief strategist Stephen Bannon whose Breitbart News served as a platform for Jew-baiting trolls. Netanyahu’s endorsement of the President’s Judeophile bona fides enabled Trump to attempt to curtail discussion of the resurgence of American anti-Semitism and any impetus it might have received from the Trump campaign with its race-baiting, xenophobia, and dog whistles.

Netanyahu was motivated in good part by the desire to cement relations with a President who might support his settlement policies on the West Bank. But beyond this, there was an impulse to dismiss American anti-Semitism as not quite the real thing. For Netanyahu, as well as many of his Jewish supporters in Israel and the US, the only perilous anti-Semitism is that of the brown shirts of the past, the turbans and keffiyehs of the present and the Leftist enemies of Israel, a rubric widened to encompass most critics of its government. In this light, Jewish members of J-Street have been called “kapos” by Trump’s proposed ambassador to Israel, the pro-settlement partisan David Friedman, who has since issued an apology for the slur. But Friedman’s ire and Netanyahu’s umbrage do not seem to extend to current actual Jew hatred in the US.

Netanyahu and his like-minded cohort have likened opposition to his policies to a form of anti-Semitism that he has equated with a hostility to Israel and extrapolated further into antipathy to the existence of the Jewish state. Anything else is a pale version, Judeophobia Lite, not to be taken seriously. Such an attitude diminishes the urgency of any other threats that Jews living outside of Israel may face. After all, if American Jews want to feel safe from anti-Semites they can move to Israel, a well-trod critique of the Diaspora.

In defending their dismissal of an anti-Semitic threat in the US, the American Jewish Right asks where Jewish liberals were when the anti-Semitic BDS began decrying Israel on campuses. The answer is that the overwhelming majority of American Jews grasped the threat posed by BDS to Israel’s existence. Through their synagogues, lobbyists, activists and pressure groups they have fought this menace from the outset. Three quarters of them also vote Democratic. The two are not mutually exclusive. One can advocate a progressive agenda in the US and support a secure Israel abroad, as do most American Jews – the vast middle-class who form the rank-and-file of America’s Jewish community. It is the Right that seeks to tie “liberalism” with “anti-Israel-ism.”

One of the ironies of such posturing is that many holier-than-thou partisans question the loyalty of their liberal opponents to the Jewish state. This is the same crowd that cries “anti-Semitism” when they are accused of dual loyalty. Indeed, if there is a genuine conflict between the interests of the US and those of Israel, and an American citizen opts for the latter, this is not dual loyalty but primary loyalty to another state. One can equally ask what kind of fidelity can American Jews expect from Netanyahu who affects to speak for the world’s Jews.

When he makes common cause with gentile fundamentalists and their Jewish counterparts, he only further divides the American Jewish community. It is this expedient alliance, which dismisses legitimate Jewish concerns about a domestic anti-Semitic revival and alienates a growing body of Jews, that threatens to undermine Jewish support for Israel in this country. It is counterproductive and ultimately destructive to the interests of Jews in both Israel and America. Such thinly veiled disdain for Diaspora Jews has poisoned everything from the “who is a Jew” issue to responses to the destruction of the Temples. When Trump’s White House refused to acknowledge any mention of Jews on Holocaust Remembrance Day and Netanyahu failed to call him out on it, we got a taste of where such attitudes can lead. It was an act that was not only expedient, but craven. We are in troubled waters if this is what we can expect from someone who considers himself to be the defender of the faith.