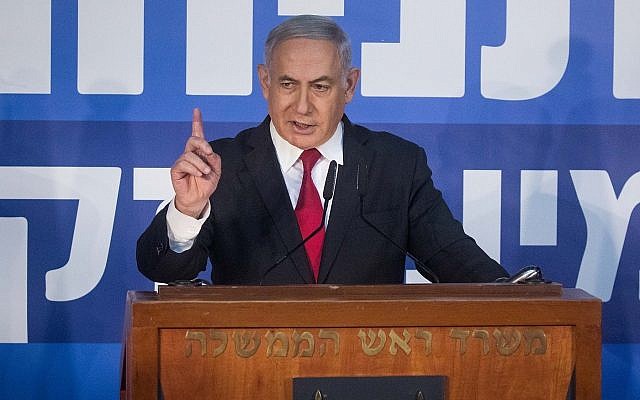 Prime Minister Benjamin Netanyahu delivers a statement to the media at the Prime Minister's House in Jerusalem, on February 28, 2019. (Yonatan Sindel/Flash90, via The Times of Israel)

Last evening’s announcement of Benjamin Netanyahu’s likely indictment on corruption charges immediately divided those political parties that embraced the prime minister’s angry, cynical “leftist conspiracy” defense and those who did not. It would have been dramatic — if it were not so predictable. The instantaneous response of right-wing and religious parties, firing off their press releases of solidarity, was nothing short of Pavlovian.

The absence of even a word of support for Israel’s police force, the attorney general’s office or Israel’s judicial system, all of which have been so mercilessly castigated since they began to question the legality of the prime minister’s actions, was conspicuous. This deafening silence needs to worry anyone who cares about Israel’s future. Casting aspersions on the motives and morality of anyone expressing dissenting views — be they dedicated public servants or rival politicians — may help the prime minister’s numbers in next week’s polls. But it has grave long-term consequences for our nation.

One does not need to read Machiavelli to understand why Netanyahu has doubled down on the “demonization” of his critics. The man is locked in a battle of personal and professional survival. A long and illustrious public career may well end in the infamy of conviction and incarceration. Under such circumstances, conventional constraints of decency and long-term national good are being forfeited and replaced by an unrestrained appeal to the tribal. Relying on the dormant “hatred of the other” has always been an effective tactic for unscrupulous politicians. As recent elections in Israel and the US show – “going low” actually works. But it comes with a price.

A more puzzling question to me, however, involves how. How do we find ourselves in such a dangerous position, where seemingly honorable political leaders consciously choose to overlook the illegal behavior and deplorable rhetoric of a ruling prime minister? How do decency and morality in public life so effortlessly give way to an ugly and crass political discourse? How do we find ourselves in a campaign where the graves of fallen soldiers are used as a prop in a Likud commercial that questions the patriotism of three former IDF chiefs of staff? How are fanatical racists so happily integrated into the country’s political mainstream? How does a largely manufactured dichotomy between left and right became a justification for jettisoning a culture of mutual respect and civility, so critical to a healthy democracy?

The similarities to the political rift in the US — as well as an increasing number of European countries — are striking. Israelis who care about cohesion and societal harmony need to learn from recent experience there. In a particularly insightful recent book, Marc Hetherington and Jonathan Weiler, two political scientists from the University of North Carolina, offer a compelling analysis of the increasingly toxic, American divide. They demonstrate how “world view” and political partisanship have converged over the past decades in the US to create an entirely new societal dynamic — almost producing two parallel countries.

Innumerable empirical surveys confirm that in recent years, Americans with competing personality traits gravitate towards competing different political parties. Hetherington and Weiler define one group’s world view as “fixed”: people disinclined to embrace change and diversity and more inclined to be sensitive to external dangers and suspicious of outsiders. The vast majority of people who profile as “fixed” tend to vote Republican. By contrast, individuals whose personalities are more “fluid” are more naturally inclined to take chances and see the benefits of multicultural interactions. People who vote for Democrats, show these “fluid” psychological characteristics.

In the past, America’s two political parties tended to include people with both kinds of personality profiles. Partisan differences were ideological – not psychological. In recent years, political affiliation has become more homogeneous. This uniformity is reinforced by increasingly divided lifestyles and culture. People who support competing parties rely on different media outlets for their news; live in different neighborhoods; enjoy different entertainment; attend different churches (and synagogues). They even drive different kinds of cars. That’s why their book is called: “Prius or Pickup.”

When I asked them whether their American analysis applied to Israeli society as well, they replied that in recent years such polarizing dynamics are absolutely being replayed on the Israeli political stage. But Israel can ill afford to continue to drift in such opposing directions and to allow politicians to exploit our differences.

Our country faces existential security challenges every day, challenges that require the full participation of all citizens in the shared task of protecting our borders and national sovereignty. The automatic dismissal of any dissenting voice from the present government as leftist, anti-Zionist or unpatriotic will have catastrophic results in this country where national unity constitutes a critical strategic resource. We have seen how this kind of rhetoric engenders acute antagonism, animosity, and assassinations.

The emergence of a new, sizable, centrist party offers an alternative approach. Of course, left- and right-wing purists are quick to point out inconsistencies between the individual opinions of Blue and White candidates over specific issues. But they are missing the point. Given its precarious circumstances, Israel simply cannot afford the kinds of divisions rupturing America’s political landscape. People who share 90 percent of the same values and positions need to start talking to each other and working together again

That is why these elections are not so much about whether the government will or will not make territorial concessions over the coming years. They are about whether Israel will maintain the democratic institutions and common cultural denominators that allow the Jewish state to preserve a core consensus that holds its people together — while still celebrating the rich ethnic, religious and ideological mosaic that we know as Israeli society.

Bibi Netanyahu is as brilliant a tactician as any Israeli prime minister. But real leadership is not just about short-term, tactical gains. More important is the vision and long-term strategy that must be articulated for the future we all share. Tragically, his politics of polarization, which plays on the fears of a political base and demonizes critics, constitutes a disastrous strategy for a country whose uncertain future demands solidarity. As the nation approaches the ballot box, we must vote for a responsible, long-term approach that brings the citizens of Israel together.