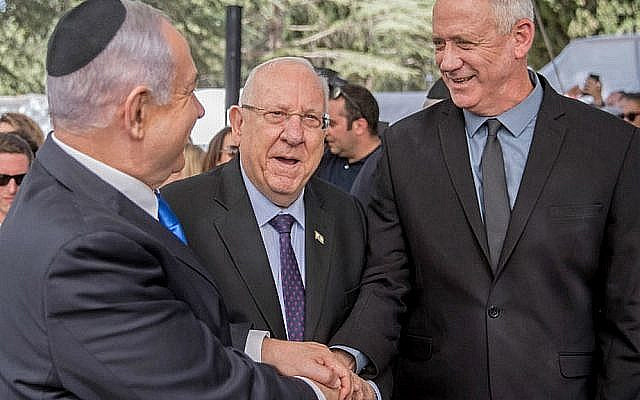 The corona crisis has conjured up a classic case study on how right Benjamin Netanyahu was in 2008 when he called on Ehud Olmert to resign as prime minister, deploying an argument that deserves a place of honor in the pantheon of Jewish quotations of all time.

Referring to Olmert as “up to his neck in investigations,” Netanyahu warned of a “not unfounded suspicion that he will make decisions based on his personal interest of political survival and not on the national interest.” How uplifting it is to recall such words of wisdom from Israel’s Mr. Clean! Have truer words been spoken by a politician?

So Olmert went and Bibi came, and still he is here, and the Time of Corona is upon us.

Over the weekend Netanyahu flung the Israel economy into a tailspin, ordering all places of leisure closed, banning gatherings of over a few people and approving police-state surveillance. The public is hoarding in expectation of a general curfew.

It is a historic moment that had better be free of hysteria. It cries out for nuance and balance, and requires a deep bond of trust between the government and the citizens. If they are not  careful they may soon become its subjects.

The specific steps are not necessarily unreasonable; the virus does present a crisis, and  European governments are also on the march. The spread of corona must be halted before the sick overwhelm Israel’s hospitals, as happened in Italy in part due to complacency.

But what about the cost?  Some will say: No, no! This is no time to worry about cost! But is cost really of no consequence? What if the virus is defeated but half the people die of stress? Ah yes, of course. That would be too high a cost. Netanyahu himself suggested as much on Saturday night.

The government makes such calculations all the time. Everyone always wants to save lives. Who could quibble with saving lives? But does the government always take every action and pay any price to save lives? Categorically it does not.

The underfunding of hospitals is but Exhibit A. According to the OECD, Israel has barely 3 hospital beds per 1,000 inhabitants, on the wrong side of the league table. Greece has more than 4, Russia has almost triple Israel’s number, and Japan’s is more than quadruple. Israel’s standing is similarly middling in numbers of doctors per capita. In preferring to spend money on yeshivas and settlements Israel is choosing not to save lives. Not in the classic sense, at any rate. 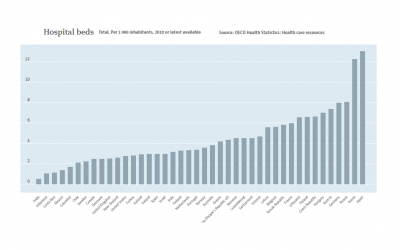 And how do those decisions come to pass? There are deliberations by armies of bureaucrats and experts meeting even on Shabbat, so we’re covered on that score. But time after time we hear that the professionals make recommendations – and the prime minister decides. What executive privilege! It is also widely understood that the prime minister is pushing for the most draconian of measures. He is not one to flinch — at least not on this issue, and not at  this time.

What is however clear is that there is a very high economic and societal price to the measures announced this week, and to those perhaps to come.

To underscore, I for one do not doubt that the virus poses a grave danger and that strong steps are needed; Donald Trump has cornered the market on corona denial. But can we be absolutely sure that politics are in no way involved in the decisions?

It is not the world’s most elegant suspicion, but let us examine it anyway, because you can never be too careful with the corona virus.

By a stunning coincidence, the response to the crisis is peaking precisely as Netanyahu’s bribery trial is about to begin, the new Knesset is supposed to be sworn in, and the president is scheduled to decide whom to task with forming a new government. Given the results of the March 2 election, that would have probably been Blue and White party leader Benny Gantz, if not for the sudden crisis. It may yet be.

Even a merely mild cynic would see that Netanyahu has a powerful interest in derailing all of the above.

Specifically, he has an interest in constructing a narrative that causes Gantz to put all pettiness aside and join an “emergency” government under the current interminably interim leadership. And how convivial that would be! Gantz’s central campaign promise, to not serve under a criminal defendant, would be trampled into dust, and the blame for any further failures and costs would be shared.

As a bonus, Netanyahu’s trial may be indefinitely postponed. And guess what? Already it has been delayed by two months, due to a Sunday morning machination by the justice minister whose raison d’etre was plainly always this. There was barely a peep of protest from the public and a press that are properly worn out. Erdogan and Trump have good reason to take heart.

To achieve that Netanyahu has deployed his rhetorical skills to erect the following house of conceptual cards:

That latter bit is the most absurd, impressive and instructive. It is the Bibi Method writ small.

For a while now Netanyahu has been seeding an infantile sentiment that he has unique powers. It is a theme familiar from the history of authoritarianism in many places, and it finds an eager audience among his fanatical base. Masses of Likudniks who otherwise possess cognitive abilities to pursue reasonably normal lives are prepared to believe that only Netanyahu could secure meetings with Putin and such. They swear by this fantasy, and a hurricane will not move them.

Now the emerging theory is that Netanyahu is somehow uniquely placed to navigate the corona crisis.

So here’s what I say to that: Even if his decisions to date have been reasonable (and I have no strong view either way) they require no particular super powers. They certainly don’t require near-daily prime time propaganda broadcasts where the prime minister is at the center claiming credit for every medical insight and receiving praise from his tragic lackeys.

Gantz, like other Israelis, could be an excellent steward no less. And he would enjoy an invaluable advantage over the current decider: there would be no reason to suspect him of serving personal interests, while “up to his neck in investigations.”