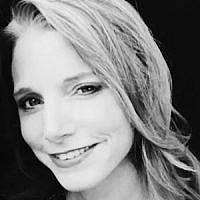 The Blogs
Lisa Feldsher
Apply for a Blog
Please note that the posts on The Blogs are contributed by third parties. The opinions, facts and any media content in them are presented solely by the authors, and neither The Times of Israel nor its partners assume any responsibility for them. Please contact us in case of abuse. In case of abuse,
Report this post. 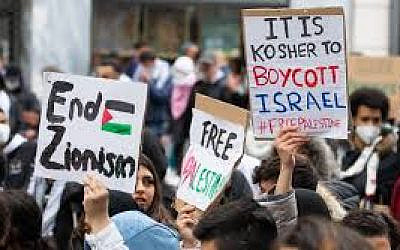 Courtesy of Austrian Union of Jewish Students via JTA

Israel and Hamas have agreed to a ceasefire after eleven days of fighting and far too much bloodshed. The hope is that some degree of calm can be restored in the region. But how are we Jews supposed to move forward now that the world has revealed its true feelings about us?

It’s been gut-wrenching to watch the tragedy unfold in the Middle East over the past several days.  The loss of life, the continuation of what feels like an endless struggle and the sheer terror experienced on both sides of the conflict.  These are human beings — not just headlines and Twitter fodder.

What’s also tragic is that this incredibly complex, nuanced conflict has been distorted to fit an oversimplified and incredibly skewed narrative.  It went from an  already reductive and misrepresentative false equivocation to an unabashedly biased and wholly untrue tale of good vs. evil.  Facts and history be damned — who needs them when you can simply search for Israel on Twitter and be greeted by thousands of posts reaffirming this warped version of reality?

And it’s not just social media – or the usual uniformed celebrity instagrammers like Bella and Gigi Hadid, Dua Lipa and The Weekend (who each individually have exponentially more followers than the world has Jews). It’s also people who play journalists on TV and whose words are therefore digested with a dangerous degree of undeserved credence,  like John Oliver and Trevor Noah.

But even more problematic is that it’s coming from establishment news organizations.  Whether it’s the preponderance of negative coverage and the downplaying of Israeli suffering in the New York Times, Washington Post, NBC News and most other news outlets or the dearth of reporting on the rampant anti-Semitism taking place globally — the media has clearly chosen sides. They are no longer reporting, but instead editorializing in one culturally acceptable direction.

It’s also coming from elected members of Congress. AOC criticized President Biden for saying that Israel had a right to defend itself.  Rashida Tlaib called Israel a “racist state” and accused the President of taking orders from Netanyahu.  Ilhan Omar said that “Israeli air strikes killing civilians in Gaza is an act of terrorism.” And anyone who dares to publicly express support for Israel is swiftly attacked and beaten into contrition.

This narrative is useful, because it provides cover and emboldens anti-Semites worldwide who now have license to shamelessly unleash their authentic selves. While it’s nothing new — antisemitism masquerading as anti-Zionism has been fully sanctioned and rampant on college campuses from coast to coast in this country for years.  And the vilification of Israel and the parallels drawn between Black Lives Matter and the plight of Palestinians is also familiar, so when Jewish-owned businesses and synagogues from Los Angeles to Kenosha were targeted during BLM protests last summer, that too was unsurprising.  And even though “Jews control the media,” there was scant reporting, let alone outrage at these incidents.

If it was about Israel or Zionism and not Jews themselves, then why burn a Jewish business in Kenosha?  Or attack a Rabbi in Essex? Or stone a synagogue in Bonn?  Or chase a mother and her child in a suburb of London? Or assault a Jewish journalist in Seattle? Or attack Jews on the streets of Los Angeles and New York City?

Jews constitute less than 3 percent of the U.S. population and yet the majority of reported religiously based hate crimes in this country were perpetrated against Jewish people or institutions. (according to the FBI) in 2019, hate crimes against Jews constituted 62% of all hate crimes based on religion, slightly up from 58% in 2018 and 2017.  And it’s only gotten worse — not just in the U.S., but everywhere.

The fact is, it is about Jews. One need only spend a few minutes on social media to witness the noxious disinformation and venom being spewed.

As Moshe Kantor, the president of the European Jewish Congress, said last week, “geopolitical events 3,000 miles away” being used as a pretext to attack Jews. “By attacking Jewish targets, they demonstrate they don’t hate Jews because of Israel, but rather hate Israel because it is the Jewish homeland.”

And part of the outrage is that we Jews aren’t supposed to fight back.

Israel is the only Jewish country in the world.  It’s approximately 420 km in length and about 115 km across at its widest point — basically the size of New Jersey. And this tiny strip of land, home to 9 million of the fewer than 15 million Jews that remain on earth, is surrounded by enemies actively seeking its destruction.

It is the sole bastion of liberal values in the Middle East — the only place where one can be openly gay, where women enjoy equal rights and where people are free to practice their religion, any religion without persecution.  A few other facts that seem to be lost on those who ignorantly and categorically condemn Israel.  Meanwhile, homosexuality is punishable by imprisonment or death in Gaza as it is in much of the Arab World — but you don’t hear any outcry about that from LGBTQ groups who are always quick to jump on the anti-Israel bandwagon. That’s not pinkwashing, it’s simply the truth.

Also perplexing is the fact that Israel is framed as the Goliath despite its diminutive size and geographic challenges — and despite the fact that it is the only Jewish state in a world in which there are 1.8 billion Muslims and 50 Muslim majority countries.

None of it makes sense.  Because hate doesn’t make sense.

Though we in the United States might feel far removed, it really wasn’t that long ago that the attempted genocide of the Jewish people took place.  So recent that – though their numbers are dwindling, there are still living survivors to tell their stories.  Yet our collective memory is staggeringly short.  My fellow reformed Jews in particular, who often embrace the narrative themselves in their thirst to be woke social justice warriors, seem to be in a protracted state of willful ignorance, enjoying a baffling false sense of security — regardless of so many indications to the contrary. You might wonder how that could be possible when six million were lost – that’s roughly the number of Jews living in all of the United States today, and more than a third of the approximately 15 million Jews living on earth — not so long ago.

And it’s not just a certain type of Jew that has to be concerned.  We all do. As we’ve all been reminded in recent days, anti-Semites don’t get or care about the nuance between conservative, reformed, or Orthodox, the distinctions among Ashkenazi and Sephardic ancestry, Zionist Hawk or Peace Now activist.  Sure, the Hassidic are more visibly identifiable, but we’re all in the crosshairs and it’s time we as a people start waking up.

I’m not suggesting that we’re on the precipice of another Shoah, but do you think the average Jewish family in1920’s Berlin thought the Holocaust was possible?  Even after the imposition of the Anti-Jewish Decrees—which included the boycotting of Jewish businesses, disenfranchisement, the implementation of the Nuremberg Race Laws, and mandatory Yellow stars — Jews still couldn’t fathom what was to come. In their minds, they were fully assimilated Germans (Poles, Austrians, etc.), but in the eyes of their oppressors, they were only ever Jews.

Just as we never could’ve imagined that we’d live through a global pandemic, see the Capitol attacked by fellow Americans, or bear witness to roving bands of Palestinian supporters searching for Jews to beat up on the streets of major U.S. cities,  the Jews of Europe didn’t see it coming either. So, let’s open our eyes, stop being surprised and let the frightfully-not-so-distant history be our reminder. AGAIN.

If this horrific situation can teach us anything, perhaps it’s that we Jews need to realize that Tikkun Olam and self-preservation are not mutually exclusive.  While it’s admirable that we look out for so many others through social justice work or Tzedek, it’s also incumbent upon us to stand up and speak out for ourselves. As Elie Wiesel said, “action is the only remedy to indifference: the most insidious danger of all.” This too is a vital step toward repairing the world.

About the Author
Lisa Feldsher is a co-founding partner at Mind Over Media and has worked with many of today’s top brands, A-list celebrities, activists and authors. Throughout her career, she has used her media expertise to give voice to causes such as civil rights, women's rights, LGBTQ rights, animal welfare and intercultural co-existence and has written for publications such as HuffPost, Medium and Kveller.
Related Topics
Related Posts
Comments