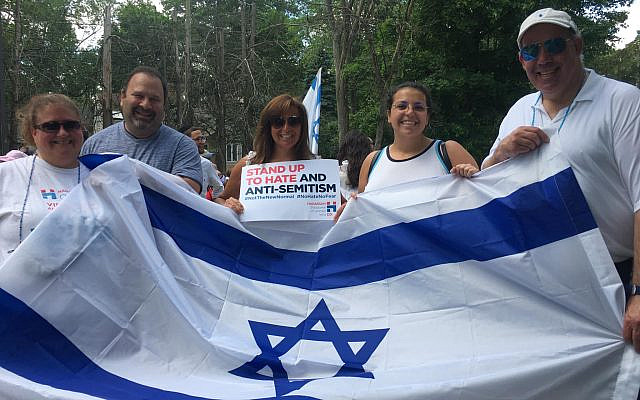 From the moment rockets rained down on Israeli civilians in cities throughout the country, social media was filled with hate against Israel and against Jews. The hashtag #Hitlerwasright, was streaming endlessly. All around the world and throughout the United States, antisemitism reared its ugly head with a vengeance. A Jewish man wearing a kippah, walking down 46th Street to participate in a rally of support for Israel, was viciously attacked. In LA, Jews eating outside at a sushi restaurant were targeted and attacked simply for being Jews. Throughout cities across our nation, hateful graffiti is being sprayed on synagogues, cemeteries, playgrounds and schools. Just this past Shabbat fireworks were set off right outside a synagogue in Brooklyn on Friday night threatening the Jews inside.

What has happened to our society? Why are there so many new incidents of antisemitism? At the end of May, the ADL reported a 75% surge in anti-Semitism, up from 64% a few weeks earlier.  Previously the ADL reported, there were more hate crimes against Jews than any other ethnic group in the year 2019. Throughout the pandemic of 2020, antisemitic crimes rose to historic levels. We are only 2% of the population yet 60% of all hate crimes are committed against Jews.

We need more education, so that people understand that anti-Zionism easily morphs into antisemitism. It is certainly free speech to criticize a nation. We criticize our own nation at times. However, when only one country is singled out for protecting her citizens during a war in which a terrorist group was shooting thousands of rockets at civilian centers, instead of criticizing the terror group who purposefully aimed at innocent civilians from their own civilian centers, something reeks of antisemitism.

How is it possible that we are living with this, 75 years since the end of the Holocaust? It reminds me of what was happening in Germany in the 1930’s. Jews attacked daily. Then it was sanctioned, today, it is not sanctioned, but it doesn’t seem to be preventable. When Jews have seen people of color being unfairly targeted, we stood up for them and protested that “Black Lives Matter”. When Asians were targeted and attacked on the streets, Jews stood up and protested to “Stop Asian Hate”. But when Jews are attacked who stands up for us?

As a Life Member of Hadassah, I have learned how to stand up. I don’t ask the question, “What can we do?”. I take action. We need action. We can’t sit around and let this continue. We MUST write to our local politicians. We MUST tell our mayors, governors, congresspeople, and president that this must end. No more thoughts and prayers for the victims. Throughout the last two months, Jews have gathered to rally in support of Israel and in support of Jews worldwide. We need to prove that we do not cower in fear. I rallied with Hadassah in January of 2020 in the NY “March Against Hate.” I brought my sign from January of 2020 to a rally in support of Israel and Jews around the country in June of 2021 in NJ. In the last 18 months, antisemitism has not abated. If anything, it has gotten worse. At rallies across the United States, Jews and Hadassah members stood up for Israel and our Jewish community.

According to a Pew Research Center 2020 study of over 10,000 respondents, Americans are shockingly uneducated about the Holocaust.  Can you comprehend that one third of all Americans don’t believe that six million Jews were killed during the Holocaust? Did you realize that two thirds of millennials do not know what Auschwitz was? We need better education and interaction among all faith and racial communities.

The Never Again Education Act was sponsored with the support of Hadassah from its inception until it was passed and signed into law in May of 2020. This act provides funds for training educators in middle schools and high schools to provide Holocaust education to our children. There are fewer and fewer survivors to give their own personal testimony. When they are gone, we will need the second and third generation of the survivors’ families to give their testimony to others. Many states have mandated Holocaust education. New Jersey, my state, has had mandatory Holocaust education since 1991.

In January of 2021, the President signed the bill to establish and maintain the “Special Envoy to Monitor and Combat Anti-Semitism Act.” We desperately need to have that position filled now. We need to do whatever we can to combat the hateful antisemitism that is permeating our society. We can’t allow what happened in pre-Holocaust Germany to happen now.

My soul aches every day when I look at my phone and see another attack has occurred against Jews. I wonder when it will happen directly to me, or to someone I know and love. I shop in a kosher supermarket. I teach at a synagogue. Soon, I will be returning to pray weekly in my synagogue. I dedicate most of my volunteer work to Jewish causes. I am immersed in the Jewish community. When will it happen to me? I can’t let it. I will speak out and do whatever I can to make a difference and help change whatever I can for the better. It is my obligation as a Jew and as a citizen of the United States of America. Let us not stand idly by as this wave of hate rises. We must subdue the momentum and bring it under control.  As Hillel said, “Im Ein Ani Li, Mi Li? If I am not for myself, who will be for me?” As Jews, we must stand up for ourselves, and our community. “Im Lo Achshav, Eimatai? If not now, when?”

About the Author
Stephanie Z. Bonder is a true "Jersey Girl" raised in the beautiful Garden State of NJ. She developed her deep love for Israel when her father first started talking to her about Israel when she was a little girl. The family first went to Israel for her bat mitzvah and her Zionism grew. In college, Stephanie studied at the Hebrew University in Jerusalem for her junior year abroad. Stephanie has dedicated much of her life to teaching young children at Golda Och Academy, a Solomon Schechter Day School in West Orange, N.J. In her volunteer hours, she is part of a 5 generation life member family of Hadassah, the Women's Zionist Organization of America. She currently is a member of the National Board. Stephanie continues to educate teens and adults on Jewish Peoplehood, Zionism and current events in Israel through her involvement with the Jewish Federation of Greater Metrowest and her synagogue, Congregation Agudath Israel. All of her blogs are her own personal opinions and do not represent the organizations with which she is affiliated.
Related Topics
Related Posts
Comments
Advertisement