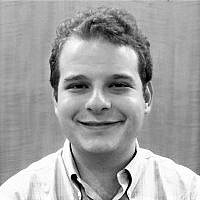 The Blogs
Michael Rock
Apply for a Blog
Please note that the posts on The Blogs are contributed by third parties. The opinions, facts and any media content in them are presented solely by the authors, and neither The Times of Israel nor its partners assume any responsibility for them. Please contact us in case of abuse. In case of abuse,
Report this post.

When I was growing up, my non-observant Ashkenazi parents exposed me to my Jewish heritage, but did not impose it on me. They taught me that our family had lived in Russia, Germany, Hungary, and Austria before moving to the United States. Any connection we had to Israel was religious, not cultural or ethnic.

This kinship to the nations of Central and Eastern Europe seemed logical. My ancestors spoke Yiddish, a Germanic language. On Jewish holidays, my family eats dishes that provoke nostalgia of shtetl life like brisket; noodle kugel; babka; tzimmes; and bagels. Benefiting from the white privilege so deeply ingrained in American society convinced me that Ashkenazim such as myself were a European people.

But in the past few years, I have become more invested in the affairs of my ethno-religious community, and I have observed the ugly resurgence of global anti-Semitism. It has taught me that almost everything I thought I knew about my heritage was wrong. Ashkenazi Jews, including myself, may very well be white, but we have never been European.

It is true that most American Jews benefit from their home country’s concept of whiteness. We have relatively easy access to wealth and quality education. Our communities generally have reasonably good relationships with law enforcement. Having a Jewish-sounding name will not reduce your chances of being considered for a job. If only the path to Ashkenazi whiteness wasn’t more of a curse than a blessing, it would be much harder to socially distinguish between Jewish Americans and other white Americans.

After the Romans exiled the Jewish people from their Southern Levantine homeland two thousand years ago, those who resettled in Europe were subjected to deeply institutionalized discrimination continent-wide. For those who lived in Eastern Europe like my ancestors, rape by Cossack soldiers in pogroms contributed more to any Slavic or Germanic features we have than conversion or intermarriage ever did. Adding insult to injury, those of us who looked less Middle Eastern were harder for violent anti-Semites to identify as Jewish when they went out to go murder us, often without opposition from secular and religious authorities.

It would appear easy to dismiss these horrors simply as products of a pre-Enlightenment state or era in Europe. It turned out that even the Age of Reason posed new problems for the continent’s Jews. Increased civil rights was a nice gesture, but the emphasis on a wholly secular society all but forced us to abandon our heritage in order to reap the benefits that came with the era’s new philosophical developments.

Attempts to erode the collective identity of “European” Jews were only the tip of the iceberg when it came to the anti-Semitism of the era. The period’s thinkers also created the intellectual framework for pseudo-scientific racism. People would start to hate us not for practicing a different religion, but for belonging to an “inferior race.” Adding nationalism to this mix helped set the stage for the rise of Nazism and the Holocaust.

Even the senseless, industrialized murder of 6 million of us has done relatively little for the people of Europe to change their opinions of us. Whenever Europe’s Jews or their homes, businesses, or institutions are attacked, the media there regularly downplay the obvious Jew-hatred motivating the instigators. Then they have the nerve to act surprised when Jews get fed up with life in Europe and make aliyah to Israel.

Once Jews immigrate to Israel, the anti-Semitic European Right passes the baton of hate to their left-wing counterparts. Regularly calling for the destruction of Israel, the most effective shield Jews have ever had against anti-Semitism, in the name of “human rights” or “social justice” isn’t enough for them. They make every effort to erase the Jewish historical connection to the land and refer to the Ashkenazi founders of the modern state as “European Jews.”

Those who insist that Ashkenazim are European are exactly part of the reason why Ashkenazim are not. You can’t exile a people from their ancestral homeland, persecute them for millennia, and criticize them when they try to return home for not identifying with you. Though many Israeli policies towards Palestinians are deplorable, it was the actions of Europeans that have compelled some Jews to feel that few-to-no other viable options exist. Still, seldom do Europeans acknowledge their own anti-Semitism as a role in the policies for which they regularly bash Israel.

An eleventh century Jewish poem famously declares “My heart is in the East, and I am at the edge of the West. One thousand years’ time has proven that this line is as relevant as ever. We may look European and act European, but until the day that actual Europeans treat us as equals, we will remain a Middle Eastern people.