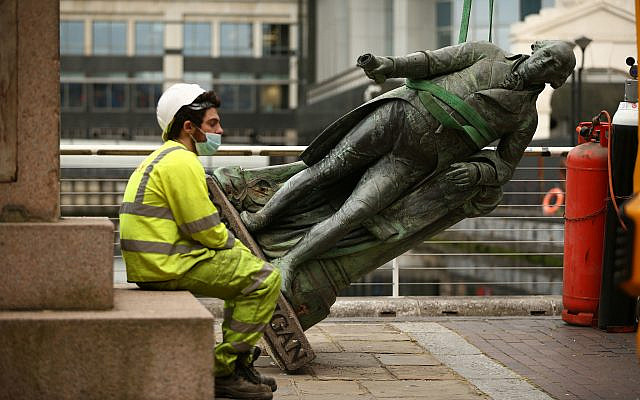 A worker sits down as they take down a statue of slave owner Robert Milligan at West India Quay, east London (Yui Mok/PA Wire via Jewish News)

In the wake of the death of George Floyd, killed whilst in police custody in Minneapolis, USA,  there has been a veritable rash of  angry public demonstrations focussed – in this country – on the effigies of known slave traders and other alleged racists.

In Bristol a lawless mob tore down the statue of slaver Edward Colston.  In London the statue of Robert Milligan, another slave trader who established the West India Dock, has been unceremoniously removed from its pedestal outside the Museum of London Docklands. Other London statues identified for possible removal include those of Sir Thomas Guy (the founder of Guy’s Hospital and an investor in the slave-trading South Sea Company) and Sir John Cass, whose fortune made from the African slave trade was applied in part to the establishment of an educational charity.

Meanwhile, London Mayor Sadiq Khan has announced the establishment of a “commission” to review the capital’s landmarks to ensure they reflect “diversity.” Statues and street names in the capital that link to slavery “should [Mr Khan opined] be taken down.” Not to be outdone, Marie van der Zyl, president of the Board of Deputies of British Jews, has managed to elbow her way into what is clearly a growth industry, by proclaiming that the Board is to launch a “Commission on Racial Inclusivity in the Jewish Community to banish prejudice and promote inclusion.” And my attention has been drawn to a website [https://www.toppletheracists.org/  ] that has been created showing the locations throughout the UK of “statues and monuments … that celebrate slavery and racism.”

So in order to assist Mrs van der Zyl, Sadiq Khan, and the “toppletheracists” website promoters, I list here just a few of the statues in London that they and their assistants might otherwise be in danger of overlooking:

Mr Gladstone, Liberal Party leader and four times British prime minister in the Victorian age, was an out-and-out antisemite. When his Jewish Tory arch-rival, Benjamin Disraeli, refused to permit the establishment of Christian states in the formerly Ottoman-controlled Balkans unless these states guaranteed basic rights to Jewish minorities, Gladstone launched a veritable crusade against him, practically accusing him of harbouring dual loyalties and of subordinating Christian interests to Jewish interests. There a number of statues of Gladstone in London, including one in the Central Lobby of the Houses of Parliament.  Gladstone Must Go!

Mr Hardie was (1893) the founder of the Independent Labour Party, which in turn helped establish what became the Labour Party thirteen years later. Hardie was the Labour Party’s first Leader in the House of Commons. But in spite of his impeccable working-class credentials, Hardie was an out-and-out antisemite. As journalist Ian Hernon recently reminded us in his book Anti-Semitism and the Left, Hardie publicly blamed “half a dozen financial houses, many of them Jewish, to whom politics is a counter in the game of buying and selling securities” for having – as he alleged – engineered the outbreak of the Boer War, and he poured scorn on “men living in Park Lane, some of whom are unable to speak the English tongue,” who were supposedly profiteering thereby. There is in the House of Commons a bust of Keir Hardie (after whom Labour’ current leader, Sir Keir Starmer is apparently named). Hardie Must Go!

Earl Lloyd-George of Dwyfor, Liberal politician, prime minister 1916-22, and prolific sexual philanderer, chaired the Cabinet that approved the Balfour Declaration. Yet at heart he was an out-and-out antisemite. Like other antisemites  of that era (notably Arthur Balfour himself), Lloyd George did not mind Jews living in Palestine. He just did not want too many living in England. As a member of the Liberal government elected in 1906, he declined to repeal the Aliens Act (passed by Balfour’s government the previous year), designed to keep poor Jews out of the UK. When the Tory-controlled House of Lords refused to pass his radical 1909 budget, he took aim especially at the part played in that refusal by Lord Rothschild. Whilst political criticism of Rothschild was  entirely legitimate,  therefore,  surely it was not in the terms publicly employed by Lloyd George, who likened the premier Jewish peer to Pharaoh  and linked him with “Philistines, who are not all uncircumcised.”  There is a statue of Lloyd George in Parliament Square. Lloyd George Must Go!

Somerset-born Ernie Bevin co-founded the powerful Transport & General Workers’ Union, which he led 1922-40, when he became Minister of Labour in Churchill’s wartime coalition government and then (1945-51) Foreign Secretary in Clement Attlee’s postwar Labour governments. In this position he went out of his way to prevent the entry into Mandate Palestine of Jewish Holocaust survivors. His fellow Labour Party member Richard Crossman is said to have likened Bevin’s outlook as “corresponding roughly with The Protocols of the Elders of Zion.” There’s a bust of Bevin in Tooley Street, south London. Bevin Must Go!

P. S. I have searched in vain for any mention of Gladstone, Hardie, Lloyd George or Bevin in the lists of statues currently being earmarked for liquidation.  I wonder why!promote debate. It’s important to shine a light on the continued adoration of colonial icons and symbols.

To promote debate. It’s important to shine a light on the continued adoration of colonial icons and symbols.