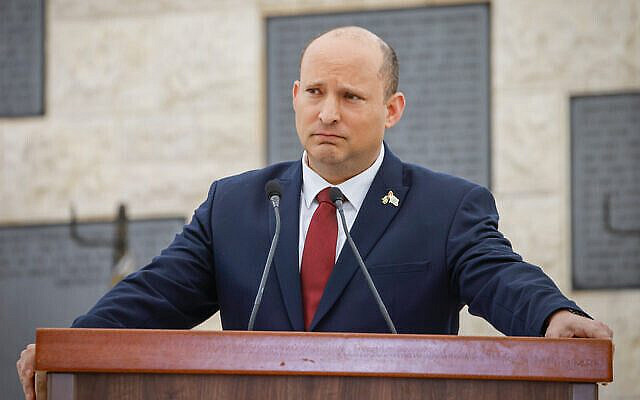 Naftali Bennett waits for heckling to stop during a state memorial ceremony for victims of terror, at Mount Herzl military cemetery in Jerusalem, May 4, 2022. (Olivier Fitoussi/Flash90)

While the politics of Naftali Bennett and Peter Beinart are very different, they met midway this week in the New York Times. Bennett, a self-congratulatory op-ed in the New York Times, takes the credit for the work Yair Lapid successfully put in when forming the most recent Israeli government. The reason Bennett is the one who published the article and not Yair Lapid is the simple fact that Yair Lapid made the basic decision to finish his term before booking his speaking tours abroad. While some self-promotion here or there cannot be judged too heavily in today’s day and age, besmirching Israel’s name on the world’s paper of record is a big deal. Especially if the byline you include for yourself is “Israeli Prime Minister.”

While I was deeply opposed to the Gaza disengagement of 2005, when a protest against the move took place in front of the Israeli consulate in New York, I refused to go. Why? Because as a Jew living in the Diaspora, I have no business telling the democratically elected Israeli government how to conduct itself.

Furthermore, in a world of media that is hostile to Israel and with enemies will easily misconstrue any criticism against Israel as evidence for events that never happened, it is important we all do our fair share to counter the lies and smears Israel faces around the world, and definitely not feed those narratives.

And this is where Mr. Bennett’s op-ed met so many of the Peter Beinart style op-eds we have seen in the past in the New York Times. While Mr. Bennett did not outright criticize Israel, Bennet’s attempt to portray Israeli society as racist for not meeting openly with Mansour Abbas glares from between the lines of his op-ed.

“Take Mansour Abbas, the leader of the Arab Ra’am party. The first time I met him was during the weeks before we formed the government….

I called him and invited him to a meeting.

“Which secret apartment should we meet at?” Mr. Abbas asked me. He was used to huddling with people in secret, as they didn’t want their discussions to be discovered.

“We’re going to meet openly at my Knesset office,” I replied. “You are not second-class. I am not ashamed to meet you.”

The use of good Jew bad Jew schadenfreude in his narrative from the pages of the New York Times is not the only problem. While I would not want to chime into Israeli politics from my place in the diaspora, since it is now in the New York Times, there is another false narrative that must be corrected.

“After a year of progress, my government collapsed amid nonstop pressure from public protests and on social networks…Organized groups set up tents just meters from the homes of these members of Knesset, relentlessly harassing their families for months, calling them terrorist lovers. One of my party members reported that her husband’s job was at risk and her children were being threatened at school.”

Sadly, the reality of protests in Israeli politics has a long history. From tents outside the homes of Menachem Begin, Yitzchak Rabin, Benjamin Netanyahu, and yes, also Naftali Bennett, protests outside the homes of politicians are not new to the Israeli scene. To claim there was something rigged that toppled his government is to delegitimize Israel’s new government.

Whether it is Peter Beinart or Naftali Bennett, your go-to paper to criticize an Israeli government should not be the New York Times. There are plenty of Israeli and Jewish publications out there to discuss our politics. Even if you do believe that criticizing Israel from the pages of the Times is acceptable, for an Israeli prime minister to do so, definitely crosses a red line that should not have been crossed. The fact that this comes ahead of a well-paying speaking tour serves to further erode trust in public officials and will be reckoned with in the future of Israeli politics. Whether it is Naftali Bennet in the New York Times or Hasmonean Elazar Hyrcanus traveling to Rome to have his brother Aristobulus removed from the throne, international lobbying of our internal quarrels never seems to end well.