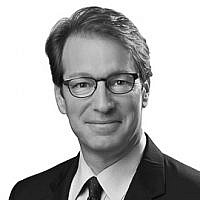 The Blogs
Peter J. Roskam
Apply for a Blog
Advertisement
Please note that the posts on The Blogs are contributed by third parties. The opinions, facts and any media content in them are presented solely by the authors, and neither The Times of Israel nor its partners assume any responsibility for them. Please contact us in case of abuse. In case of abuse,
Report this post.

On the campaign trail in 2012, President Obama argued that the goal of nuclear negotiations with Tehran is to “get Iran to recognize it needs to give up its nuclear program and abide by the U.N. resolutions that have been in place.” However, the recent understanding reached in Lausanne represents a marked departure from a longstanding international consensus—ratified through six United Nations Security Council resolutions by representatives of the world community—that Iran should fully dismantle its nuclear infrastructure. The Obama administration has reversed our policy towards Iran from prevention to containment—as dangerous an innovation as any “Obama Doctrine” has ever been.

The emerging deal with Iran offers dangerous concessions that do not stop the advancement of Iran’s nuclear program. Not a single nuclear site, including the illegally built Fordow and Natanz underground facilities, will be closed. The Arak heavy water reactor, which could provide Iran with a plutonium path to the bomb, will remain up and running. Prospects of installing a long-term, intrusive, and verifiable inspections regime seem less likely with each passing day. The Iranian regime will receive billions of dollars in additional, desperately needed sanctions relief that will bankroll its continued support of terror proxies across the Middle East. And key components of the deal will expire in as little as ten years, leaving Iran free to ramp up its nuclear weapons program in just the blink of an eye in the life of a nation.

Moreover, this framework agreement completely ignores major substantive issues, including Iran’s terror campaign across the Middle East, gross human rights violations, unjust imprisonment of American citizens, and ballistic missile and warhead development programs. The Administration has chosen to reward the mullahs for minor, cosmetic tweaks to their nuclear program in exchange for tacit acceptance of Tehran’s belligerence and explicit approval of Iran as a threshold nuclear state. So much for President Obama’s goal post of forcing Iran to “give up its nuclear program.”

Over the past decade, Congress has been at the forefront of combating Iran’s nuclear ambitions by passing crippling economic sanctions against the Islamic Republic that forced the regime to face the tangible consequences of its irresponsible, immoral behavior. Yet the Administration has kept my colleagues and I entirely in the dark throughout these negotiations while stonewalling bipartisan calls for congressional oversight on a final nuclear agreement. We can and must play a role in reviewing and approving any agreement with such significant consequence for the safety and stability of the United States and our allies. If this deal is, as President Obama insists, a “good deal,” he should be more than happy to let Congress and the American people see it fully, unfiltered by spin, to judge for themselves.

Iran forfeited its privilege to a domestic nuclear program through its decades of hostility and violence against the free world—including cooperating in the brutal deaths of countless civilians. This deal does nothing to dismantle Iran’s nuclear program and merely procrastinates addressing this grave threat to our national security. We cannot allow the world’s most dangerous regime to acquire the world’s most dangerous weapon now or in the future. President Obama has said on multiple occasions that no deal is better than a bad deal. No deal is certainly better than this deal.