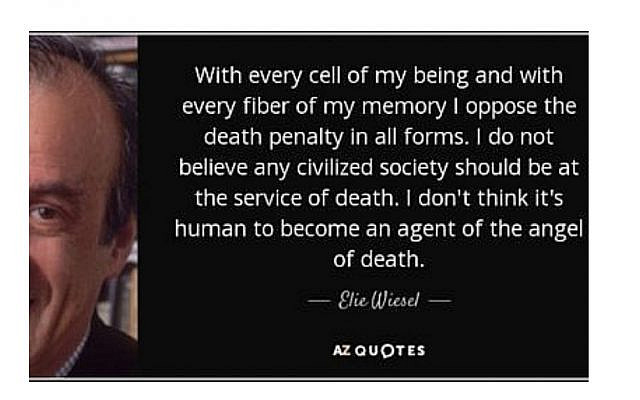 A word about who we are. We, the members of  “L’chaim! Jews Against the Death Penalty,” stand united against capital punishment in EVERY SINGLE case – for both the innocent AND the guilty – with NO exceptions. We are aligned with Holocaust survivor and Nobel laureate Elie Wiesel (1928-2016) and countless other survivors and children of survivors who realized after the Holocaust that a state with the power to murder its own defenseless citizens has NO PLACE in the civilized world. This applies to the United States, which employs the Nazi T4 legacy that is “lethal injection,” as well as gas chambers – including one that uses Zyklon B, as used in Auschwitz – electrocution and firing squads. Capital punishment is a racist, human rights BARBARISM that makes the United States a laughingstock as we deign to advocate for the advancement of human civilization. To quote Elie Wiesel: “Death is not the answer.” Professor Wiesel also famously said this: “With every cell of my being and with every fiber of my memory I oppose the death penalty in all forms. I do not believe any civilized society should be at the service of death. I don’t think it’s human to become an agent of the angel of death.” THIS is our anthem.

You can read more about our views on this subject in our blog with the Times of Israel here: https://blogs.timesofisrael.com/author/michael-zoosman/
You can also read sources that have been collected from across the Jewish world on this subject at the website of our partners at Death Penalty Action: http://deathpenaltyaction.org/jewish-action

To be sure, not all in the Jewish world are abolitionists. Many individuals are unaware of the Nazi legacies of the execution methods shared above. Our job is to inform them, and to mobilize the Jewish world against this horror. When we do reveal this historical fact to others, many of them join our ranks. Yet, some remain steadfast in supporting death, citing the antiquated and rabbinically redacted idea of “an eye for an eye,” an idea that had been practically legislated away in the Talmud. (Please see copious writings and sources on this here: http://deathpenaltyaction.org/jewish-action) Others, still, retort with a response that asks: “but what would you have done with captured Nazis like Eichmann…or Hitler?!”

Our answer to that question is as clear as the clarion call of the shofar/ram’s horn that we will soon blow at Rosh Hashanah/the Jewish New Year: we are against the death penalty in ALL cases. This INCLUDES the members of the Third Reich. We stand with Martin Buber and the countless Jewish leaders who were appalled at the Israeli government’s execution of Adolf Eichmann and protested it until the very end. (Here is one of many articles about this: https://blog.nli.org.il/en/hoi_eichmann_opposition/) Indeed, over time more and more Holocaust survivors like Eva Mosez Kor (https://candlesholocaustmuseum.org/our-survivors/eva-kor/her-story/her-story.html) and their scions began to champion ideas of restorative justice, rather than execution. For a most powerful example of this, please see this stirring op ed from renowned Jewish abolitionist and third-generation Holocaust survivor Stephen Cooper, entitled “A Life Without Parole Sentence – not the Death Penalty – for Hitler” https://www.citywatchla.com/index.php/important-reads/13385-a-life-without-parole-sentence-not-the-death-penalty-for-hitler

Indeed, I myself am symbolic of the evolving attitudes on this issue in recent generations. I, too, am a third-generation Holocaust survivor. Growing up, I ardently supported the idea of putting to death those individuals who murdered my many extended family members. Then, I became a cantor and prison chaplain and realized that people who have done horrible things can and do change.

(For my own journey, please see here: https://docs.google.com/document/d/1IWRihovxhBVMbU0G6WvLnKWLzpWMvWRu-TEvAoCBq8A/edit?usp=sharing)

I saw the proverbial light when I realized that by killing those who had killed my family members, I would be lowering myself to that level, rather than helping to raise us all up. I learned the truth of the notion that Mahatma Gandhi, of blessed memory, put most powerfully when he said “An eye for an eye makes the whole world blind.”

…like Abe Bonowitz, Director of Death Penalty Action (http://deathpenaltyaction.org/),
…like Israel’s Karine Omry of the Death Row Soul Collective (https://www.deathrowsoulcollective.com/),
…like Elyse Max, Executive Director of Missourians for Alternatives to the Death Penalty (https://www.madpmo.org/)
…like Rabbi Shmuly Yanklowitz and Eddie Chavez Calderon of the inspiriting Orthodox Social Justice organization Uri L’Tzedek (https://utzedek.org) and Arizona Jews for Justice, http://www.arizonajewsforjustice.org/
… like film director Sabrina van Tassel, who made the life-saving documentary movie “The State of Texas vs. Melissa”
(for more about that initiative, please see here: https://blogs.timesofisrael.com/pikuach-nefesh-jewish-abolitionists-help-save-the-life-of-melissa-lucio/)

The list goes on and on. To be sure, more and more umbrella organizations of Jewish institutions continue to come out against the death penalty from across the Jewish world.

As for us at “L’chaim!”, we shall never look back. Our ranks continue to grow DAILY as we have received growing exposure, and sponsorship from wonderful Jewish organizations like T’ruah: The Rabbinic Call for Human Rights, (https://truah.org/resources/parshat-shoftim-michael-zoosman-moraltorah/), which endorsed our chanting of Kol Nidrei, the consummate prayer asking for forgiveness, for the national sin of the death penalty. We carried out this solemn act in front of the US Supreme Court these past two years as part of the Annual Fast and Vigil to Abolish the Death Penalty. (https://momentmag.com/death-penalty-kol-nidre/)

And yet: the fight continues. We have been publicly targeted by antisemitic pro-death penalty groups in our nation and have had to report such groups to the Anti-Defamation League and the FBI. NEVER AGAIN shall we allow such forces to silence us!

And that is not all. As I write these words, we now face the prospect of new American gas chambers being used to kill people across our land (please see here: https://actionnetwork.org/petitions/say-no-to-the-gas-chamber). One would think this would be anathema for Americans, who would realize that this CANNOT stand in the wake of the events of the 20th century. And yet, here are some comments we received on social media when we alerted people to this development just this past week:

THIS is what happens when we open the door and invite in Malakh HaMavet – the Angel of Death. The result is that all bets soon become off when it comes to the promise of basic human decency. The world learned this the hard way from the Nazis. We CANNOT allow this to happen on our watch.

State-sponsored murder must END.
Elie Wiesel knew it.
Martin Buber knew it.
The POPE knows it. (https://deathpenaltyinfo.org/stories/news-brief-pope-francis-calls-for-prayer-to-abolish-the-death-penalty)
The members of L’chaim know it.
…how about YOU?

If so, please join our cause, and our resounding call, as we loudly chant…

Note: This post first appeared on the IHfl Blog – Death Penalty News” on 16 September, 2022, and is reprinted here with permission. (https://ihflger.wordpress.com/2022/09/16/no-death-penalty-no-exceptions/)

About the Author
Cantor Michael Zoosman is a Board Certified Chaplain with Neshama: Association of Jewish Chaplains (NAJC) and received his cantorial investiture from the Jewish Theological Seminary of America in 2008. He sits as an advisory board member at Death Penalty Action and is the founder of “L’chaim! Jews Against the Death Penalty.” Michael is a former Jewish prison chaplain and psychiatric hospital chaplain. Currently, he is a multi-faith hospital chaplain at a federal research hospital, the National Institutes of Health - Clinical Center. His comments here represent his own opinions.