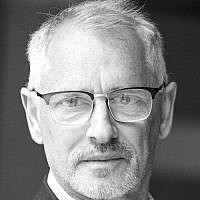 The Blogs
Arkadijus Vinokuras
Apply for a Blog
Advertisement
Please note that the posts on The Blogs are contributed by third parties. The opinions, facts and any media content in them are presented solely by the authors, and neither The Times of Israel nor its partners assume any responsibility for them. Please contact us in case of abuse. In case of abuse,
Report this post.

I’m having a dark laugh, Homeland Union/Lithuanian Christian Democrats member of parliament Laurynas Kasčiūnas did not, thank God, accuse Jews for the coronavirus. But he did accuse the Lithuanian Jewish Community of financially supporting “that liar” Rūta Vanagaitė’s book “How Did It Happen.”  (R. Vanagaitė is author of a bestseller “Our people”. The story is about Lithuanian perpetrators during the Nazi occupation of Lithuania 1941-1944.)

You might ask what my fake headline has in common with MP Kasčiūnas’s accusation against the LJC. Well, both ideas are false and allow for manipulating the truth.

See, the main figure in the book isn’t Rūta Vanagaitė, but Dr. Christoph Dieckmann, one of the best known European historians and an expert on the Holocaust in Lithuania. Or is it this fact which frightens Kasčiūnas? It’s one thing to criticize a “dilettante of history” (as Rūta Vanagaitė’s critics claim) and quite another to criticize a member of the International Commission for Assessing the Crimes of the Nazi and Soviet Occupation Regimes in Lithuania, convened and supported by the president of Lithuania.

In trying to hide his fear of the truth, Kasčiūnas engaged in manipulations but has forgotten that half the truth is also a lie. As if that weren’t bad enough, Kasčiūnas has contacted LJC chairwoman Faina Kukliansky, demanding she explain to him the motivations for the decision by the Goodwill Foundation to finance “the Rūta Vanagaitė project.”

I quote his statement on his personal Facebook page: “Kukliansky is the chairwoman of the community and therefore I ask her whether the allocation of 10,000 [euros] to Vanagaitė fits with the goals and mission of the foundation.” This is the answer, then: the Goodwill Foundation funded a joint project by Rūta Vanagaitė and Christoph Dieckmann. But for some reason, the MP is only talking about Rūta Vanagaitė. Why is that? Because all the intrigue would disappear were the world-renowned historian mentioned. This historian cannot be accused of working for the Putin regime. He cannot be accused of dilettantism either.

A question for Mr. Kasčiūnas: On what legal foundation does a member of parliament demand the Lithuanian Jewish Community provide him with a non-financial report on the activities of the Goodwill Foundation? On what legal basis does he demand an explanation for the financing of one project or another?

The state auditor conducts an annual audit of the Goodwill Foundation. No violations have been discovered.

The Goodwill Foundation’s articles of incorporation nowhere contain a point, article or line regarding state censorship, i.e., about the state’s right to interfere in one decision or another made by the Goodwill Foundation. Moreover, they do not violate the Lithuanian law on associations, and money isn’t being sent out of Lithuania or embezzled in some manner.

In this context I’ll remind readers I was a consultant to prime minister Andrius Kubilius during the Homeland Union/Christian Democrat Government of 2009 to 2011 for the project called “Compensation for Jewish Communal and Religious Property.” My position was very clear: the monies paid out should stay in Lithuania, the foundation’s articles of incorporation must conform to Lithuanian law and the Lithuanian Government performs an annual financial audit of the Goodwill Foundation. The foundation’s executive board is constituted of 26 people who present projects to the foundation while the board of directors, whose members are the leaders of all the Lithuanian Jewish communities, decide on financing projects. Nowhere in the foundation’s articles of incorporation is there any mention of censorship of Goodwill Foundation activities.

It would be the same thing if, for example, the state returned land to Mr. Kasčiūnas and then later told him where and what kind of flowers to plant on his private property. And if planted them in the wrong place, he’d have to explain.

It seems Mr. Kasčiūnas was afraid he wouldn’t have sufficient arguments in a discussion with a professional historian and decided instead to take a risk and cross a very sensitive red line. Doesn’t he understand that inappropriate criticism based on half-truths of the Lithuanian Jewish Community during the coronavirus pandemic is teetering on the edge of inciting hatred? That his disproportionate statements could quickly make scapegoats of Jews in Lithuania? This is how the president of Turkey, Iran, and the Palestinians are already acting. This is how neo-Nazis in the USA and Sweden are behaving. I am not able to say whether this Lithuanian MP today who was the right hand of the neo-Nazi Murza in his youth is acting out of simple foolishness, or whether he is relying sinisterly on what is left unsaid to incite hatred against Jews intentionally.

It would be hard truly to dismiss Dieckmann, that’s true. This historian has dismantled the anti-Semitic myth spread by Lithuania’s ultra-patriots which claims the Jews welcomed the Soviets with flowers in 1940. That’s why, they say, revenge was taken against them when the Nazis came.

Dieckmann says the truth is that in June of 1940 when the Soviets marched into Lithuania the Lithuanian military was ordered to stand along the highways and welcome the Soviet army. No matter how afraid Kasčiūnas and his radicals are of this, order no. 107 exists.

It was issued on June 15 by the commander of the Lithuanian military general Vincas Vitkauskas and head of the military’s chiefs of staff general Stasys Pundzevičius. They ordered the commanders of all army divisions and the riflemen to “welcome the most friendly army of the USSR.”

In his speech of June 16 then-acting Lithuanian president Antanas Merkys again emphasized the new units of the Red Army had “arrived as a friendly army of allies seeking only the greater security of Lithuanian herself and the Soviet Union.” He called upon the people of Lithuania “to maintain peace and order … and avoid unfounded rumors.”

It was ordered to help the Soviets repair their broken tanks. According to the renowned historian, the deep trauma of the Lithuanians wasn’t just connected with the fact they didn’t protest against the occupation, but also because the Lithuanian state at the highest level welcomed working together with the Soviets.

Who were the most important officers on the committee for integrating the Lithuanian military into the Soviet army? General Stasys Raštikis who later collaborated with the Nazis. In 1940 he was a member of the commission which was tasked with integrating the Lithuanian military into the Red Army. So much for the myth that “the Jews themselves are to blame because they welcomed the Russians with flowers.” But you won’t begin hating your own traitors, will you?

Dieckmann has been researching the Holocaust for decades. He’s visited more than 30 archives in 7 countries. Over those decades he’s attended and participated in numerous discussions of the Holocaust and the German occupation around the world. His extensive book on the events in Lithuania between 1941 and 1944 was published in German in 2011. It still hasn’t been translated into any other language [sic].

Dieckmann calls the Holocaust a European phenomenon, and to really study it a scholar should ideally be able to read documents in 20 languages in order to begin to answer questions such as what happened, how did it happen and why. He said he had the good fortune to be able to conduct research in Yiddish, German, Hebrew, English, Russian and Lithuanian. He said he learned Lithuania just so he could read the Lithuanian sources.

I repeat the question: did the local right-wing radicals whom, it appears, MP Kasčiūnas actively represents also take affright of this historian’s research in the book “How Did It Happen” supported by the Goodwill Foundation? After all, he along with MP A. Gumuliauskas and the ultra-patriots are pushing the shameful and criminal idea that any and all should be punished who say the Lithuanian state was to blame for the Soviet occupation of 1940. [And] to punish those who say the administration appointed by the Lithuanian Provisional Government in 1941 actively took part in crimes against humanity.

I suggest Kasčiūnas just stick to his own work [as a member of the opposition] criticizing Lithuanian Peasants/Green Union politicians, for example, the lies of healthcare minister Veryga. According to colleague Andrius Tapinas: “We have received replies from healthcare organizations: ‘we asked for respirators, they aren’t giving them,’ ‘we have nothing, we ourselves are making masks out of cloth, help us,’ ‘our regional hospital is lacking everything, we just have two respirators and two [protective] gowns.’”

Perhaps member of parliament Kasčiūnas could at least pretend to be a real democrat by criticizing the healthcare minister’s demand to introduce strict censorship regarding the spread of the virus, and therefore, it would appear, shutting the mouths of critics? But no, he’s concerned with the “Jewish question” during the time of plague. As a club against the Lithuanian Jewish Community, making use of Lithuania’s seemingly one and only enemy, Rūta Vanagaitė

Wake up, Homeland Union conservatives, ladies and gentlemen. Lithuania’s enemy today is the coronavirus. And the Russian missile system recently deployed in Kaliningrad. We knew all too well how these “Jewish problem” solutions during the plague years ended for the Jews over two thousand years of European history.

What the old hats of the Homeland Union/Christian Democrats least need is a green light for the speculations of the right-wing radicals giving rise to the basest instincts and aimed at one or another ethnic group in Lithuania. All the more so right now in this tense situation as the world faces a horrific pandemic, in the light of which the search for enemies, half-truths and tacit omissions appear especially grotesque.

About the Author
A professional journalist for 35 years in Sweden and Lithuania. Articles are published in Europe, Sweden, Lithuania. A member of the Lithuanian Jewish community. A frequent guest on Lithuanian TV channels and radio talk show. Comments on the largest internet daily in the Baltic states www.delfi.lt Political observer. Writer and professional actor. www.vinokuras.lt
Related Topics
Related Posts
Arkadijus Vinokuras
Comments