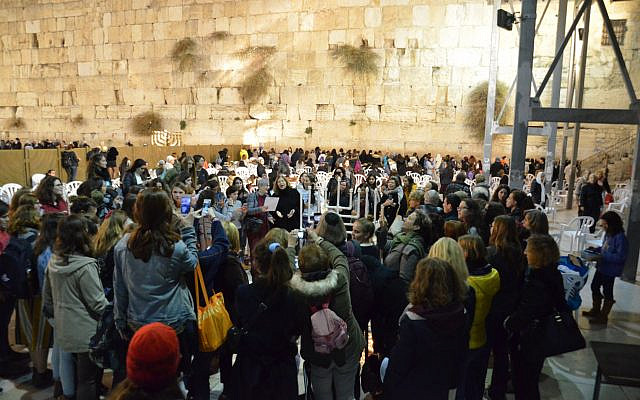 I am pondering a long-considered philosophical paradox: “If a tree falls in the forest and no one is around to hear it, does it make a sound?”

Or perhaps a more fitting riddle: If a Menorah is lit and no one is around to see it, does it in fact radiate? If a woman whispers “…that you commanded us to light the Chanukah candles” under her breath, swallowing the words so that no remnant lingers in the air, does her blessing resonate and fulfill the festive rite?

Chief Rabbi Yitzhak Yosef has demonstrated through his decision to hold Israel’s national Chanukah candle-lighting in the men’s section of the Western Wall a total disregard for women’s full inclusion in public and religious life. His statements forbidding women from lighting Chanukah candles “in synagogues, large events or at the Western Wall” goes explicitly against normative Halakha (Jewish Law) and reveals  deep-seated intolerance and intimidation in the face of diversity.

In his remarks, Rabbi Yosef explains his opposition to women’s involvement in the Chanukah ritual by asserting that such a practice “goes against our rabbis from generations upon generations and copies the Reform and Conservative customs, and we must keep far away from them.” Not only does this comment revise history to omit the majority of rabbinic opinions that permit and encourage women to light the Menorah, it also shows an attempt to use Halakha as a weapon against those deemed by Rabbi Yosef as “not kosher.” In the rabbi’s view, the sanctity of a mitzvah (commandment) is defiled when touched by women, or by those who do not meet his stringently narrow Orthodox standard. By such measures, Jewish life remains a holding of the elite, out of reach to the expanse of Israel.

We must not abide by this exclusion. For the sake of Israel, and for the sake of growing our shared light, we must reclaim our rights, so that no authoritative body can declare a monopoly on Jewish practice.

The mitzvah of lighting Chanukah candles is centered around the concept of pirsumei nisa, “publicizing the miracle,” codified in Jewish Law as the custom to display the Menorah in a window or near a public-facing entrance. The candles are forbidden for any practical use and designated for the sole purpose of being seen. In emphasizing the “publicity” of the candelabra, the Sages illustrated a key value, one I urge us all to keep in mind: our light can only shine fully when it is seen, when it is witnessed.

Rabbi Yosef’s disturbing words and the underlying attitude they display must not go unchallenged. In maintaining a women-free candle-lighting at the Western Wall, the Chief Rabbi declares women should be neither seen nor heard in the public sphere. This is a danger to all of us who value Israel’s pluralistic richness and democratic identity. We will not diminish our light in the face of darkness. We must, now more than ever, shine bright.

“May a new light shine over Zion and may we all merit swiftly to bask in its light.”