Israel’s fast expanding economy and developing technology have made it possible to build in large-scale operations. Urban land being a scarce commodity especially in the center of the country, Tel Aviv and Jerusalem municipalities have recently proposed gargantuan projects for roofing over sections of the Ayalon highway and Begin Boulevard. This trend towards large-scale building projects to meet growing population needs is pre-empting traditional and preferable means of urban densification: infill and extension of the existing urban fabric. 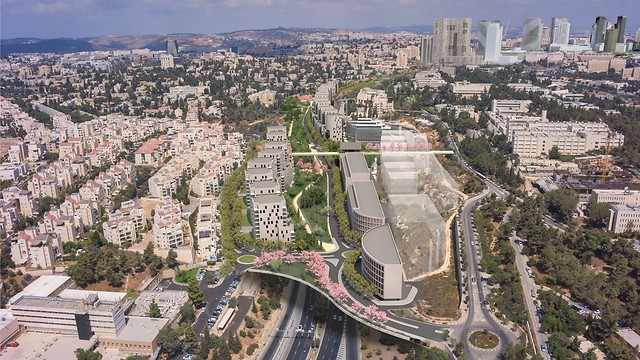 Computer simulation of the proposal for roofing over a section of Jerusalem’s Begin Boulevard between the Beit Hakerem neighborhood and the Hebrew University Givat-Ram campus. (Dagan Advanced Visual Solutions)

Rarely are these large-scale planning and building projects in harmony with individual human scale and needs. To list the colossal failures of large-scale planning and building projects world-wide over the years would require volumes. Brazilia, Sarcelles — Paris, Co-op City — New York. Israel would take up a heavy volume of its own. A single word will suffice to describe the project now in progress for decking Begin Boulevard in Jerusalem, a project which has the full backing of Mayor Nir Barkat — megalomania.

Innumerable failures at the large-scale have this in common: lacking in diversity, oblivious to their neighbors and the natural environment, unrelated to the scale of man and built all at once, they are anti-social, spiritless, sterile and dull, their architecture inevitably cold as ice.

Associating large-scale building with the scale of man is no simple matter. Few designers have succeeded in meeting this challenge. Among the strategies employed were the following; creating projects having a high degree of organized, organic and coherent complexity arrived at by structuring the problem and searching out its constraints, then responding appropriately to a host of relevant particulars.

Building programs were finalized only after careful study of the site and its surroundings in order to sensitively determine the capacity of the land available, never on predetermined demand projections as is so often the case today. As a single firm is simply incapable of generating a sufficiently variegated design at the large scale, understood was that involving many parties in the planning process enriches the work. All saw the critical need for creating an urban environment having a strong identity, one which encourages social interaction and interpersonal relations. Great attention was given to the public realm. An inclusive and balanced approach related to the long-term with real concern for coming generations, basic.

Israel planning and building today has a most serious problem at the top — at the level of those taking critical design decisions. Ministers, mayors, heads and members of planning and building committees are ignorant on this subject. One can only pray that their political education will be urgently expanded to include matters of design. Minister Kahlon and Mayor Barkat — are you there?

To make matters worse, over the last decade, more and more key positions in our planning bureaucracy have been taken over by “geographers,” graduates of degree programs in city and regional planning, their training emphasizing quantitative considerations alone — accountants. Entirely lacking in aesthetic sensibility, three dimensional understanding, critical to the urban design discipline, is far beyond their reach. Their knowledge of the intricate interrelations between the physical environment and the social amounts to zero. They are in fact utterly incompetent to judge architecture and urban design.

We are speaking here of major planning and building projects at the large scale. To say that we are not at all in good hands would be a gross understatement. Well-informed individuals in the right places are desperately needed.

Market forces geared to short-term profit have of course governed planning and building in Israel for many years now. Serving this political and socio-economic order too many architects have forfeited their leadership role, their ethics highly questionable. The results have not been happy ones. The status of architectural profession has been severely eroded as a result.

While technology progresses in many ways, in others it separates us more and more from our humanity. Architects and urban designers are the only people who stand in the middle ground between technology and humanity. Imperative is that they regain their former leadership role. As the present trend toward large-scale planning and building projects in both the governmental and private sectors is sure to continue, their most important task today is to seek out the unbalanced features of this reality and overcome them. Only the creativeness and ingenuity of our very best design professionals, tied to true human purpose, can bridge this gap.

Gerard Heumann is an architect and town planner, based in Jerusalem.

About the Author
Gerard Heumann is an architect and town planner in Jerusalem.
Related Topics
Related Posts
Gerard Heumann
Comments