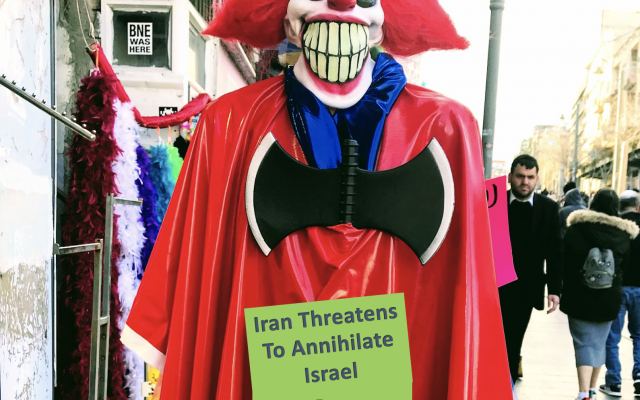 With a new Iranian ultraconservative hardliner, Ebrahim Raisi, serving as President of Iran, there is not only concern about the ability to get a deal done that would actually stop the dangerous Iranian nuclear program by someone like Raisi who is already accused of crimes against humanity, but also about radical Iranian leadership’s ongoing threats against Israel, and their capability and bloodthirsty desire to carry them out.

There is a saying from a survivor of Auschwitz and Buchenwald about taking threats seriously:

When someone threatens to kill you, just believe them.

Just like Adolf Hitler and the Holocaust that killed six million Jewish men, women, and children, we need to take the Iranian threats to Israel innermost to heart and believe them, especially in light of existential threat they pose through their relentless pursuit of nukes, ballistic missiles, and terror both directly and through their terrorist proxies Hamas and Hezbollah who are already targeting Israel with hundreds of thousands of missiles.

Recently, I was quietly sitting on a bench and someone was overheard calling me a “Jew” and said that it didn’t sound like they meant it as a compliment. I started to think seriously about whether the radical Iranian mullahs fully understand how their virulent and hateful anti-U.S. and anti-Israel sentiments sound to us. Aside from regular Iranian chants of “death to America” and “death to Israel” as they burn our flags and leaders in effigy, as well as the Iranian’s vicious Holocaust denials, here are some quotes from some of Iran’s radical Islamist leadership as referenced by former Ambassador of Israel to the United States, Michael Oren in his excellent book Ally:

In 2007, Yossi Klein Halevi wrote in The New Republic that we must take Iranian threats seriously:

A Jewish state that allows itself to be threatened with nuclear weapons–by a country that denies the genocide against Europe’s six million Jews while threatening Israel’s six million Jews–will forfeit its right to speak in the name of Jewish history.

The fact of the matter is that when a terrorist who hates you and wants to kill you talks, they are telling you that homicidal action is soon forthcoming. It starts with words of disdain, loathing, threats, and hostility, but make no mistake, that those words end in terror and death. Terrorists, like the radical Iranian mullahs are not someone you can sit down with for tea, have a nice conversation, and work out a meaningful or binding diplomatic agreement. Unfortunately, the only thing that a murderous, racist terrorist understands is a punch in the nose! Accordingly, no amount of talking with Iran is going to lead to them ceasing their pursuit of weapons of mass destruction to use against the Jewish State and the United States. In their own very distorted “religious” minds, the irrational Iranian mullahs hate us and want us dead, period. To them, we are the scorned infidels, and they are the holy jihadists on a mission of murder. As much as we want peace with all our neighbors, in this case, a military response is not only necessary, but required.

Unfortunately, Iran is clearly not seeking to rejoin the failed Joint Comprehensive Plan of Action (JCPOA) deal and certainly not one without a sunset clause that will provide an unmistakable path to the bomb. No matter how much talk, Iran (like North Korea) will not discard their weapons of mass destruction know how, capability, or pursuit, and the radical Islamists there will not stop their existential threats to Israel, the Jewish people, and western civilization until the dirty deed is actually done. As former Prime Minister Benjamin Netanyahu told the United Nations General Assembly:

For the Ayatollahs, mutually assured destruction is not a deterrent, it’s an inducement!

Moreover, now we are reaching the tipping point, and this last week, Israel Defense Minister Benny Gantz warned members of the United Nations Security Council that Iran is just 10 weeks away from being able to break out to a nuclear weapon. However, Iran is just the latest genocidal enemy coming on the evil coattails of Adolf Hitler to try and destroy the Jewish people. But the more that they hate us and seek to destroy us—and with ever more powerful and deadly weapons—the greater our determination to fight and to live!

We Jews have a secret weapon. We have nowhere else to go.

The Jewish people have learned very well the hard and painful lessons from tyrannical madmen who have sought to destroy us over the centuries. The Holocaust is seared into our present-day consciousness like the tattooed numbers were into their victim’s flesh. We have learned to never let our guard down, to expect the unexpected, and to fight like hell when we have to. I am confident that with G-d’s help, Israel and the United States will not wait until it’s too late or stand by for a genocide to happen again! What Iran “says,” it means, but what Israel “does,” it expertly succeeds at.