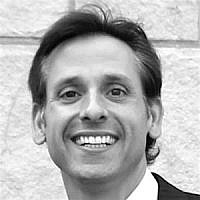 The Blogs
Jonathan Berkun
Rabbi of the Aventura Turnberry Jewish Center, Miami FL
Apply for a Blog
Please note that the posts on The Blogs are contributed by third parties. The opinions, facts and any media content in them are presented solely by the authors, and neither The Times of Israel nor its partners assume any responsibility for them. Please contact us in case of abuse. In case of abuse,
Report this post. 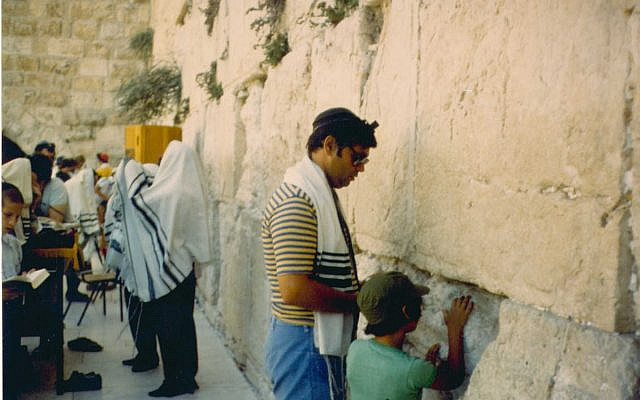 Recently, my 11-year-old daughter Eliana asked if she could borrow some of my clothes. Perhaps I shouldn’t have been surprised, as she has been borrowing my wife’s clothes for months now. Over the years, my older, teenage sons have been “borrowing” several items from my wardrobe that have never been returned. This was the first time my daughter asked for my shirt.

Last Wednesday, her Jewish Day school sent the following email to parents: “Our school community stands together to show our solidarity with Israel as it defends itself against hundreds of rocket attacks throughout the country. To show our support, all students and staff should wear any shirt in support of Israel.”

Eliana knows that I have been to many Israel rallies and celebrations over the years. While I don’t wear the t-shirts from those events often (ok, so I don’t wear any t-shirt often), she also knows that I am very reluctant to throw anything away. So in my closet, I have a large plastic bin labeled “nostalgic t-shirts” where I store every shirt that has survived my wife’s periodic attempts to discard items I don’t regularly wear.

In that bin is a t-shirt I wore in Israel when I was 17 years old in 1990 on USY Israel Pilgrimage. There is a t-shirt from when I was Rosh Ski Mayim, the head of the waterski program at Camp Ramah in Canada. There are t-shirts with my collegiate logo that I wore at Columbia College in New York 25 years ago. And there are t-shirts from dozens of Israel missions, parades and celebrations, including one of my favorites from when I led a teen tour to Israel at age 20 that is signed by all the 40 teenage participants from that summer of 1993.

So on Wednesday night, I climbed up my step stool and pulled down the “nostalgic t-shirts” bin from the top of my closet. And right there on the top of the pile were two blue ones, as if they had been patiently waiting for me just for this very moment.

The first shirt was this one: on the front, it says “I ‘heart’ Israel: Wherever I stand, I stand with Israel.” 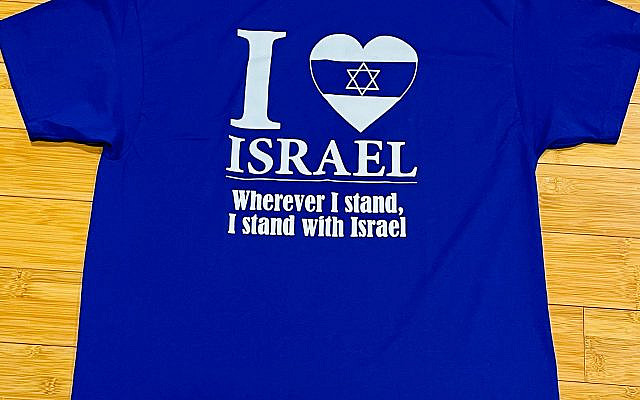 It was from Israel’s Yom Ha’atzma’ut celebration at the Michael Ann Russel JCC in North Miami 10 years ago on May 9, 2011, when Israel celebrated its 63rd year of sovereign independence. I remember going to that parade with my older sons, Jeremy & Jonah. Ellie was only a year old at the time. Jeremy was 7 and Jonah was 5.

I have photos from that day with the two of them in these T-shirts that were also far too large for them at the time. Jeremy is holding a large, Israeli flag that was taller than he was. I remember bringing them because I wanted to instill in my children from a young age the same love and attachment, I have for the nation-state of the Jewish people. 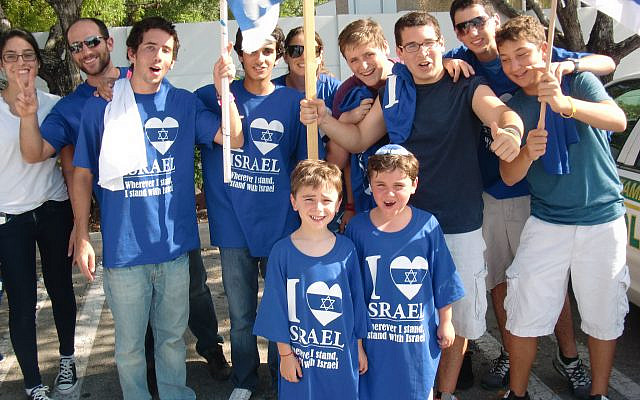 Jeremy & Jonah and some bigger kids celebrating Israel’s 63rd year of independence, May 9, 2011

Ellie took the shirt and wore it proudly the next day to school. As I gave it to her, I realized that I will actually be happy if she doesn’t return it. I’m not naïve enough to believe that she will suddenly start wearing it often, but after the events of the past two weeks, I’ve come to believe that it would be nice if she did—if we all did — at least every once in a while.

Retrieving a 10-year-old nostalgic T-shirt is a kind of metaphor for the relationship many American Jews have with Israel. We love Israel, but most of us haven’t been able to get there in at least a year due to the pandemic, and for many of us, it’s been many more years since our last visit.

As for our concern for Israel’s safety and wellbeing — yes, there have been wars and kidnappings and stabbings and drive-by shootings in the last 15 years. Terrorists exploded buses and bombed cafés in the early 2000s and 1990s. There was a costly war in Lebanon in the ’80s, but arguably, Israel’s last truly existential crisis was the Yom Kippur War, the year I was born in 1973.

As for the Six-Day War, Israel’s proactive and decisive war of self-defense awakened and inspired many American Jews in 1967 to proudly identify with the Jewish homeland, you have to be at least 60 years old to remember that monumental moment.

For nearly 50 years, despite many threats and challenges, Israel has been strong, safe and secure. It has smartly adapted its defense mechanisms to respond to persistent attacks, by land, sea and air; high in the skies or deep underground; in cyberspace and social media; in border regions and populated cities.

For nearly 50 years, I have been visiting Israel without ever worrying about my safety. Even in 2014 when rockets rained on Jerusalem for the first time and I was huddling in a secure stairwell in my hotel, I was nervous, anxious, concerned, but somehow even then, I knew I would be ok.

I knew I would be ok because for my entire life, Israel has been ok. This week, that very fact is the reason why American Jews may have a problem. Israel has been ok for many reasons, but chief among them, is that America has had Israel’s back most notably since 1973. Yes, America was supportive of Israel before then, going back to President Truman’s immediate recognition of the newly reborn State in 1948. But it was the Yom Kippur War when the US provided Israel with much-needed, existential support, support that has continued until this day.

It was not until I pulled this old t-shirt from the bin in my closet that I realized how easy it is to let our Israel advocacy lie dormant. It’s easy to take it for granted that Israel will always be there and to forget that for 2000 years we didn’t have it. It’s easy to assume that because Israel has so many powerful friends and allies that she always did and always will. It’s easy to relegate our love for Israel into the “nostalgic” corner of our hearts, with no need to wear our love on our sleeve on a more regular basis.

But in this age of social media, when enemies and haters of Israel can spread lies and half-truths and photos without context and narratives without history around the world with the click of a button, we no longer have the luxury of leaving Israel in the realm of nostalgia. It is hard to see these words as threatening when Israel is so accustomed to actual, physical threats. But Judaism teaches that words can be as dangerous as arrows. And history teaches that when unchecked lies are repeated often enough, people begin to believe them as truth.

It is also hard to believe that we can make a difference. There is so much noise out there, so many opinions, and so many complicated issues. It’s not so easy to wade into those waters, to take a stand, to open oneself up to attack. But one thing this latest conflict has taught us is that we don’t get to stand on the sidelines. When Israel’s friends and allies see us silent or quiet — and instead receive an onslaught of anti-Israel sentiment — it matters. Now is the time to make our voices heard — on social media, in reaching out to our elected officials, or by calling our friends and relatives in Israel.

When we make our voices heard, it not only matters more than we think, but it can change the world. I know this from another blue t-shirt that was sitting just beneath the one I gave my daughter Eliana this past week. This was the other shirt at the top of my nostalgia bin that I wore it 35 years ago this past Shabbat. 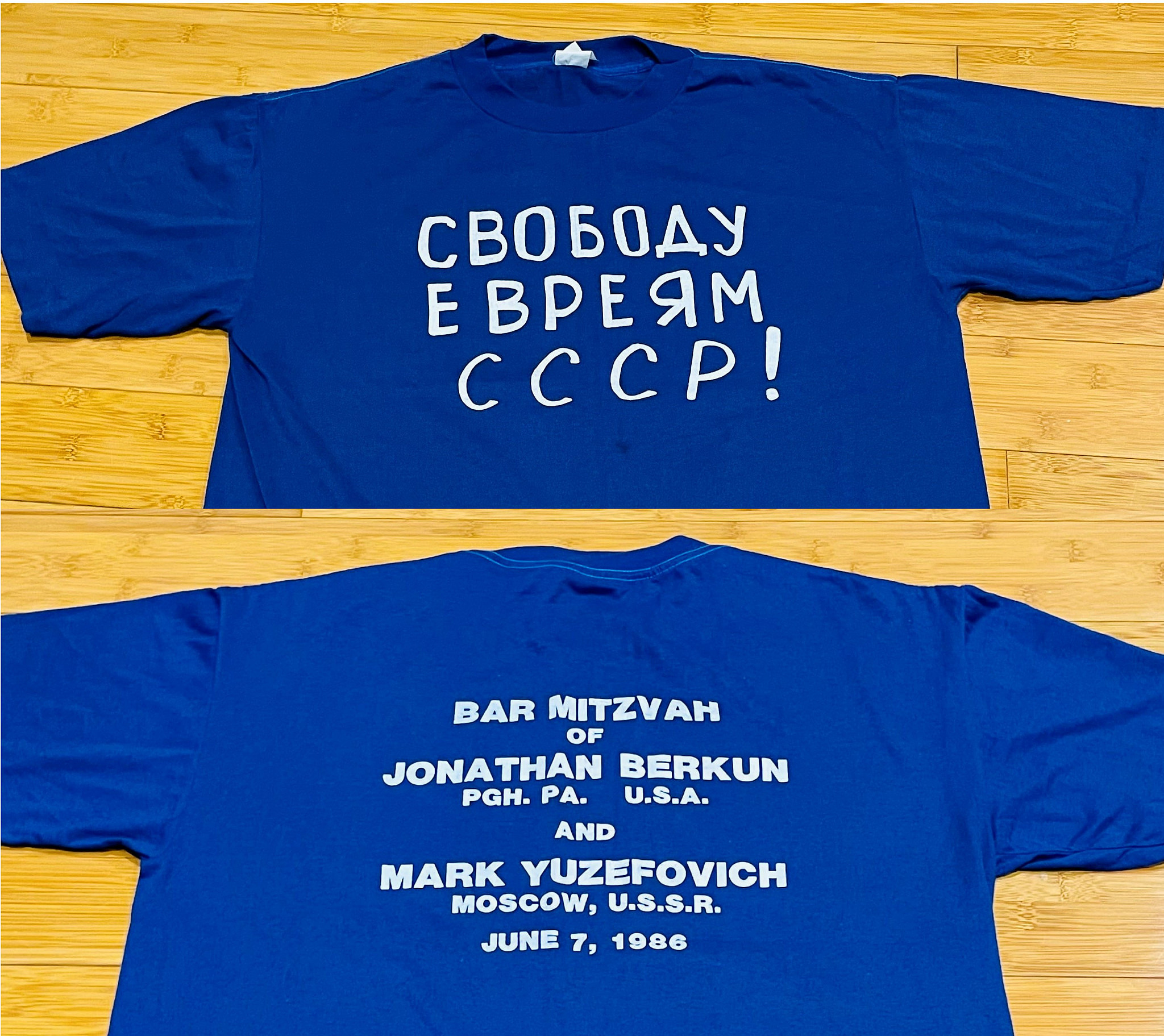 On the front, in Russian letters and in the Russian language, it says “Free Soviet Jewry.” On the back, it says, the “Bar Mitzvah of Jonathan Berkun, Pittsburgh, PA and Mark Yuzefovitch, Moscow, USSR: June 7, 1986.”  It was parashat Bamidbar, this past week’s Torah portion, that I became a Bar Mitzvah 35 years ago. Soon afterwards, hundreds of thousands marched on Washington to free Soviet Jewry. Not only did we accomplish that goal, but it marked the beginning of the end of the Soviet Union as it was then known.

I am not suggesting that hundreds of thousands of us march on Washington in support of the State of Israel. Maybe one day that kind of gathering will be necessary, and I hope that it never will be. But there are different tools we can use in 2021 that can have the same effect as a massive rally. If our muscles of solidarity have grown soft, we must exercise them again. If our love for Israel is relegated to memories of yesterday, it must be awakened and renewed.

No doubt, all of us — each in our own way — have a lot of nostalgia for Israel. But we must not allow the Israel of today or the urgency of this moment to remain tucked away in the recesses of our hearts and mind. The time has come to take it out, dust it off if it has been a while, and wear our love and support for the State of Israel on our sleeves.

May all of Israel’s citizens and all the inhabitants of the region one day live in peace, and may we do all that we can to help bring about that day bim’hera v’yameinu, speedily and soon.

About the Author
Jonathan Berkun is the senior rabbi of the Aventura Turnberry Jewish Center, a Conservative synagogue in Miami, past-President of the Rabbinical Association of Greater Miami and a Senior Rabbinic Fellow at the Shalom Hartman Institute. He was raised in his father's synagogue, Tree of Life Congregation of Squirrel Hill in Pittsburgh.
Related Topics
Related Posts
Comments