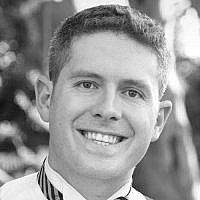 The Blogs
Alexander Chester
Apply for a Blog
Advertisement
Please note that the posts on The Blogs are contributed by third parties. The opinions, facts and any media content in them are presented solely by the authors, and neither The Times of Israel nor its partners assume any responsibility for them. Please contact us in case of abuse. In case of abuse,
Report this post.

Like many Jews, I was initially confused and upset last week when the Congressional Black Caucus and the Congressional Progressive Caucus pushed back on the efforts of Democratic leaders to draft a resolution condemning Ilhan Omar’s remarks that alleged that American supporters of Israel are guilty of dual loyalty and that American politicians support Israel because of Jewish financial support. The CBC and CPC pushed for a resolution which condemned language such as Omar’s, but also condemned other forms of bigotry and hate speech. To me and other Jews, this initially struck me as the progressive equivalent of “All Lives Matter”, an effort to minimize the suffering of a marginalized group.

Some of Omar’s defenders argued that she was attempting to make legitimate critiques of U.S. foreign policy and the influence of special interests on U.S. policy, albeit she did so rather clunkily, inadvertently using language that mirrors distinctive historically antisemitic tropes. We in the American Jewish community asked Omar and her defenders to put themselves in our shoes: While to outsiders the primary thrust of Omar’s comments may have been the underlying policy substance, to those of us who have seen the tragic consequences to our people that have followed dissemination of such antisemitism “tropes” over many centuries, combating her language must be step one before we can even begin to address any possible substance to her claims.

Some of Omar’s defenders argued that although her language may have been inappropriate and imprecise, the primary reason she was attacked is because of her attempt to go against the mainstream position on America’s relationship with Israel. But we reject this notion. Examples abound of American elected officials who routinely criticize the actions of the Israeli government without being tarred with the brush of bigotry. For example, look at Betty McCollum, who represents the district next door to Omar’s. McCollum has been a consistent critic of Israeli behavior for years, and nobody (who deserves to be taken seriously) has accused her of antisemitism. If Betty McCollum isn’t a big enough name in this regard, how about Bernie Sanders?

Others argued that Omar was attacked because she is a black Muslim woman. They pointed to the fact that simultaneous to the near-universal condemnation of her across the political and media spectrum, she was receiving death threats in Minnesota and was being accused of pro-Taliban sympathies in the West Virginia capitol. Of course, we reject the notion that she was condemned because of the color of her skin or her religious identity. To us, the distinction between her and McCollum, for example, is not that one is a black Muslim and the other a white Catholic, but that one couched her criticism in antisemitic language, and the other does not.

However, if we are to be honest, it is hypocritical for those of us who are so offended by Omar’s words to demand that her defenders put themselves in our shoes if we are not willing to do the same. Just as I might tell an African-American colleague how it makes me feel as an American Jew when I hear her language, I need to listen to him when he tells me how it makes him feel as an African-American when a black representative is receiving death threats and racist attacks and simultaneously is being condemned by the mainstream media and her own caucus leadership.

To me, it is instructive that the Congressional Black Caucus led the charge against the initial Omar-centric resolution. Many CBC leaders are not only leaders in Black/Jewish dialogue, they are among Israel’s strongest champions on the Hill (folks such as Elijah Cummings, Sheila Jackson Lee, John Lewis and Hakeem Jeffries). No one would ever accuse these leaders of being soft on antisemitism, so why did they have a negative reaction to a resolution that to me, a white American Jew, seemed like a slam dunk?

Perhaps I failed to see their perspective. Perhaps I failed to understand what it feels like to witness incessant racism and persecution for the last three years, from the president of the United States all the way down to backbench members of Congress, with no congressional action. Perhaps I failed to understand how it feels for Congress to ignore the long list of white Republicans engaging in antisemitic tropes (Donald Trump: “You [Jews] are not going to support me because I don’t want your money, you want to control your own politicians”, House Minority Leader Kevin McCarthy: “We cannot allow [three Jewish billionaires] to BUY this election”, Jim Jordan: spelled the name of a liberal Jewish donor with a dollar sign in place of an S in a tweet attacking Jewish Congressman Jerry Nadler, etc.), only to immediately jump into action when the culprit is a black woman. Perhaps I failed to understand how it feels as an African-American for America to have one set of rules for everyone else, and another set of rules for you.

Yes, I know that my reaction against Omar was not motivated by any bigotry against who she is as a person. But I don’t know how it feels for African-Americans to witness a black representative universally condemned for behavior that whites (including many of those on the right who are currently attacking her) get away with every day. I don’t know how it feels to see a member of my community censured at the exact same time that she is receiving death threats and being called a terrorist.

In the pro-Israel Jewish community, it is axiomatic that the treatment of Israel in the United Nations is antisemitic. It is not antisemitic to criticize Israel, we say, but when Israel is treated differently than how all other countries are treated, that is antisemitism. As I listened to those criticizing the initial draft resolution, which focused only on Omar, I heard a similar refrain. It is not racist to criticize Ilhan Omar, they said, but when Omar is treated differently than how all other politicians are treated, that is racism.

And so while I shall continue to condemn Ilhan Omar and any other politician who engages in what I consider to be antisemitic language, I am also going to redouble my efforts to listen to the voices of African-Americans and others of different backgrounds who see racism where I do not. If I am going to demand that the African-American community be good allies of the American Jewish community, then we must be the same to them. To be clear, this does not mean that we bend in our fight against antisemitism. Two wrongs never make a right. But it does mean that we listen to them as they explain how our fight impacts them, especially when we focus it on the words of Ilhan Omar alone. Let us fight to ensure that even if Ilhan Omar is a lost cause, we do not lose all of those who think of her as a victim.

About the Author
Alexander Chester lives in New Jersey with his wife and three sons. He visits his parents and brothers in Israel as often as he can.
Related Topics
Related Posts
Comments