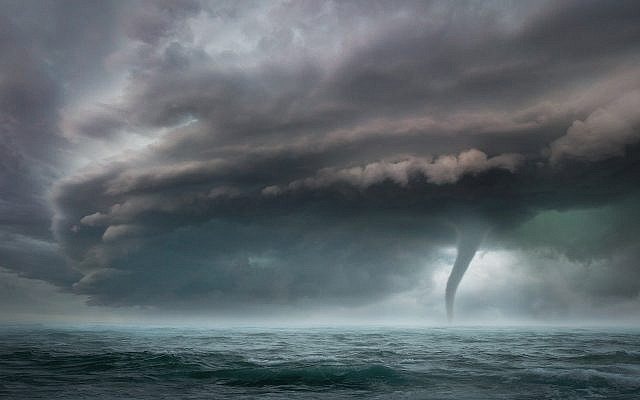 God creates a perfect, self-sustaining planet, teaming with life. God places human beings in it and gives them seemingly divine powers: rule over all living things, and the ability to build, create, transform, and take mastery over the entire planet (Breishit 1:28-29).

God demands from them only that they accept some limits and understand that their mastery and control cannot be complete; with every six days of creating comes one day of surrendering control; with the mandate to work the land comes the obligation to protect it as its custodians (2:15). But human beings are not able to live by these restrictions. Appetite and greed drive their actions (3:6). They become mighty and powerful; they believe everything is theirs for the taking: the property of others (6:11), women whom they covet (6:2), and even human life itself (4:8). Even those who do not perpetrate these evils are complicit (Rashi, 6;13). Their own shortsightedness and self-centeredness—or simply their cowardice or apathy—allow them to ignore what is happening, to convince themselves that it is not their business and that trying to do something about it would be pointless. They become passive enablers, the evil continues to flourish, and the entire land becomes morally corrupt.

God realizes that there is no choice but to start again, to bring a flood, recreate the world, and hope that this time, with more guidance, humanity will get it right. Noah works on the ark for 120 years. Maybe he could have done a better job trying to warn people, but his tireless efforts make it clear to anyone listening that he is announcing the end of the world. But this is a message no one is interested in hearing. Even when the rains begin, when the evidence is before their eyes and the water is up to their ankles and knees, they refuse to believe that God will allow the world to be destroyed (Rashi, 7:12). When the flooding starts, when the storms are out of control and their fate is sealed, they finally want to repent; they will do anything to be saved. But by then it is too late.

We tend to react with an air of superiority and incredulity when we hear this story: How wicked must these people have been to act as they did! How stupid to be so willingly blind to their fate!

I remember having a similar reaction as a kid, many years ago when I was an avid reader of Superman comics. In the origin story, Jor-El, Superman’s father, investigates the frequent volcanic explosions on Krypton, his home planet. Realizing that its core will soon explode and destroy the entire planet, he urges the leaders to build spaceships to save their civilization, but the council refuses to believe him. Who is willing to seriously face the possibility that their planet is on a path to destruction? As he tells his wife, “Because of their stupidity, a world will die!” In the end, he is only able to build one small spaceship. He puts his baby son, Kal-El, on it and sends him to Earth, where the boy will grow up to become Superman.

This is a Noah story, even if I didn’t recognize it at the time. What I do remember thinking was how incredibly stupid and short-sighted the planet’s leaders were. How could anyone not take such warnings seriously? With the fate of their planet hanging in the balance, even if they did not care about anyone else, wouldn’t their concern for their own safety and that of their families compel them to heed the warnings?

But now, sadly, the lack of response and willing blindness fail to shock me, for I see them every day in how we, particularly we Americans, are responding to our own flooding and impending planetary disaster. I am referring, of course, to global warming and climate change. These things are incontrovertible facts, and it does not require trust in scientists to accept them as such. The evidence is before our eyes: It can be seen in pictures of polar bears stranded on tiny ice floes.

It can be seen in thinning, receding glaciers, like those I saw in the Canadian Rockies a few years ago. It can be seen in the weather, the unprecedented heatwaves and hottest years on record, in the droughts, hurricanes, blizzards, and tornadoes. And it can be seen in flooding, which has caused hundreds of deaths, billions of dollars of damage, and impacted millions of lives. Every day the ice caps are melting, rain is falling, storms and floods are increasing, and the water is rising ever higher, and we, like the generation of Noah, go about as if nothing is happening.

Some carry more blame than others. The energy companies have devoted tremendous resources to disputing the evidence and spreading misinformation and to quashing U.S. efforts to reduce carbon emissions. Politicians support and further these efforts by publicly denying climate change, even while many of them acknowledge the reality in private. They are driven by power, greed, or simply cowardice, knowing that they would be attacked or even ousted by their own party if they were to act differently. But we are all complicit: every one of us who uses goods produced by industries that emit high levels of carbon dioxide; every one of us who eats beef on a regular basis; every one of us who decides that there is nothing to be done and throws up our hands in resignation to the fact that our planet is on a path of self-destruction.

One somewhat hopeful note is that, with the increasing and increasingly obvious effects of global warming – from extended fire seasons in California to flooding of the Great Plains to five straight years of droughts in Central America –   more Americans are recognizing see climate change as a crisis. It has taken far too many years for us to get to this point, and sadly, too many Americans still refuse to recognize it as such. Even Judge Amy Coney Barrett, daughter of an oil executive, during her confirmation hearings insisted on calling climate change “controversial.”

As this election season draws to a close, let us take some serious time to reflect on how we can elect representatives and leaders who embrace the divine mandate to protect the world, who will work tirelessly to ensure that the world remains good and life-sustaining, that we will have a planet to pass down to our children and grandchildren, leaders who are willing to take courageous stands, telling people what they don’t want to hear, forcing people to change their habits and practices before it is too late, before the doors of the ark close and it floats away forever.

God has taken an oath that God would no longer bring another flood to destroy the world. God will not send another flood, and God will not send another Noah. It is all in our hands now. We will either bring the next flood, or we will save ourselves from it. But the water is rising, and we must act before it is too late. We must be the custodians of the world that God has charged us to be.