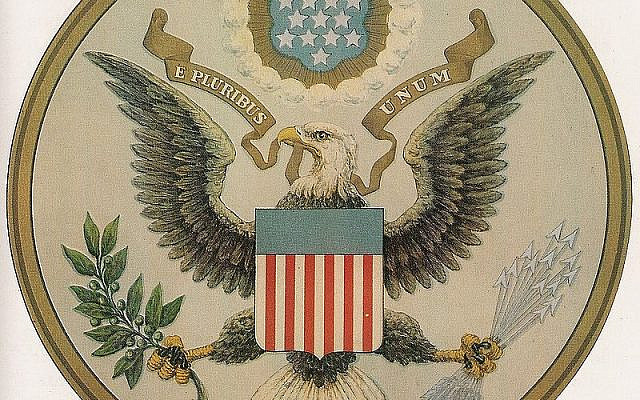 Illustration: The 1885 obverse design of the Great Seal of the United States (public domain)

Noach, the ultimate Parsha of Universal symbols, from the rainbow, to the tower of Babel, the flood, and the ark, Parshat Noach has earned its place among universally recognized symbols. And yet, the dove and the olive branch has become most universally recognized as a symbol of peace. After months of floating around a decimated world, Noah finally sees there is a future to what he thought was a bygone world. The dove brings back the olive branch, letting Noah know their life will carry on.

“And Rabbi Yirmeya ben Elazar also said: What is the meaning of that which is written: “And the dove came into him in the evening, and lo, in her mouth was an olive leaf, plucked off [taraf]; so Noah knew that the waters were abated from off the earth” (Genesis 8:11)? The dove said before the Holy One, Blessed be He: Master of the Universe, let my food be bitter as an olive but given into Your hand, and let it not be sweet as honey but dependent upon flesh and blood. He adds this explanation: Here it is written: Taraf. And there it is written: “Remove far from me falsehood and lies; give me neither poverty nor riches; feed me [hatrifeni] my allotted portion” (Proverbs 30:8).” (Sefaria)

According to the Talmud, the dove holding the olive branch symbolizes the beauty of being able to sustain oneself rather than rely on others for a living. Better eat an olive branch, bitter thought it may be, rather than depend on a human for food–sweet though it may be. From this perspective, the live branch represents honesty, independence, freedom, and paying a high price for what we want.

Yet many wonder, when looking at the Jewish outlook at the story with the dove, what kind of lesson it is coming to teach us. Is this not an example of exceptional thanklessness? Is this not also a slap in Noah’s face? Does the dove really need to tell Noah she would rather eat the most bitter of foods than depend on Noah’s daily meals for which he worked so hard?

Rabbi Moshe Rubenstein from Israel, in his book Parperet Moshe answers with a beautiful idea. The saying goes: “If you give a man a fish, you feed him for a day. If you teach a man to fish, you feed him for a lifetime.” There is no greater gratitude the dove could have shown than showing Noah she can now provide for herself. Rabbi Rubenstein attaches to this rabbinic teaching that an olive is one of the only treens that cannot be grafted or combined with another tree. The dove was telling Noah she would provide for herself no matter what happened, with no combinations whatsoever.

This is all the more understandable considering the rabbis’ lesson teaching that the sin that led to the great flood was the sin of Gezel–stealing. The dove’s great compliment was to tell Noah that difficult though it may be, she would not want to cut any corners when it comes to her livelihood. In this view, the dove and the olive branch are a symbol of honesty and self-reliance.

This is all frighteningly sharp when contrasting it with the lesson found in Pirkei De’Rabi Eliezer (chapter 23), stating that the raven’s first find was a human corpse, and it remained to eat it rather than to come back to Noah.