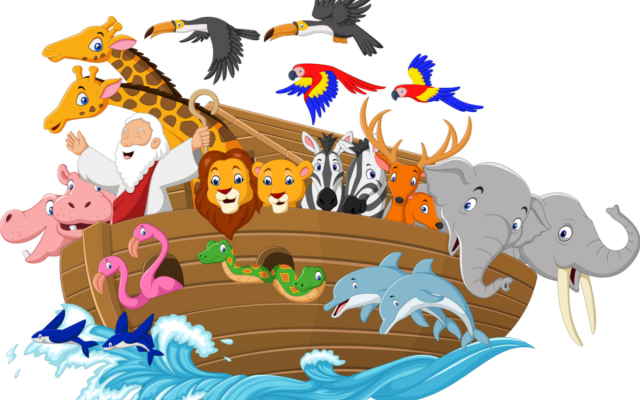 As mentioned in the previous post, “The Noah’s Ark—A Model of a Living Cell,” Noah’s ark was a microcosm. Structural parallels have been drawn between Noah’s ark and the Holy Temple in Jerusalem (Bet HaMikdash), Tabernacle (Mishkan) (each of these sanctuaries is also called microcosm in its own right), and Mount Sinai—all based on the parallel between three levels of Noah’s ark, on the one hand, and three levels of the sanctity of various areas in the sanctuaries and Mount Sinai, on the other. In the previous chapter, we investigated a parallel between Noah’s ark and a living cell. We will now focus on this tripartite structure of Noah’s ark to further investigate its symbolic meaning as a model of a human being (who is also called a microcosm in its own right).

The first parallel that immediately comes to mind based on the tripartite structure of Noah’s ark is the parallel with human faculties—physical, emotional, and intellectual. The physical body corresponds to the lower tier of the ark designated for the refuse; the emotional faculties correspond to the second floor occupied by animals; the intellect corresponds to the top tier occupied by the humans. Let us consider each of these levels separately.

Why do we draw a parallel between a human body and the lowest level of the ark that housed waste? First, our bodies produce waste. This ability is an essential characteristic of all living beings, which all labor to maintain internal homeostasis (steady state equilibrium) by increasing entropy in the external environment. Entropy is a measure of disorder—the higher the disorder, the higher the entropy. Homeostasis is a highly ordered state of an optimal physical and chemical state necessary for a biological system to function. Because it is a highly ordered state, it has lower entropy. To decrease entropy internally, all biological systems—from cells to whole organisms—must increase entropy externally. This entropy increase is accomplished by consuming food, on the one hand, and digesting and excreting the waste (as well as by dissipating energy through heat by maintaining body temperature), on the other. This process increases entropy in the environment and balances the books of thermodynamics. This demonstrates that the ability to produce waste—a topic not to be discussed in a polite company—turns out to be an essential property of a live organism. Thus, the nethermost level of Noah’s ark that housed waste may indeed be viewed as hinting at a bodily function of a live organism, such as a human body.

On a spiritual level, this parallel holds as well. In Kabbalah, the “body” of a lower angel is called the “excrement” of a higher angel. That is because an angel acts as an “optical filter” of sorts—it absorbs spiritual light from above and “excretes” a small portion of it below. This filtration and diminution of the Divine light are necessary to enable the lower creatures to receive and benefit from this light. Using another metaphor, angels serve as transformers that lower the voltage in the power lines from the unusably high voltage of the electricity at the point where it is produced at a power plant to the consecutively lower levels until it becomes low enough to be used to illuminate homes and power consumer appliances and electronics. For these reasons, Kabbalah calls a body of a lower angel an “excrement” of a higher angel. In this sense, our physical bodies are viewed in Kabbalah as “excrements” of the lowest angels of the world just above ours, the world of Yetzirah. Thus, on a spiritual level, the parallel between the nethermost deck of Noah’s ark and our physical bodies holds.

The second deck of Noah’s ark housed animals. This level is parallel with human emotional faculties. Kabbalah and Chassidic philosophy teach that the primary difference between animals and humans is not intellect but emotions. It is not correct to think that animals do not have intellect. Albeit not as developed as human intellect, but animals do have intellect. What differentiates humans from animals is that human intellect controls (or, at least, should control) the emotions called in Kabbalah toledot—offspring of intellect, whereas animals’ emotions control their intellect. In animals, emotion dominate, and intellect is subservient to the emotions. Various animals became emblematic of certain emotional and character traits. For these reasons, we draw a parallel between the second deck of the ark where the animals were kept with human emotions.

The third deck of the ark housed Noah and his family. This level, of course, is parallel with human intellect. It is not for naught that humans are called homo sapience. Noah, as the leader of his generation and the head of his family, represents the head. Collectively, all humans housed on the upper deck of the ark represent intellect.

Perhaps we might add that the skylight in the ark’s roof symbolizes the portal to the spiritual world—the soul.

As we demonstrated above, the three tiers of Noah’s ark are parallel three levels of a human being—physical, emotional, and intellectual. In this parallel, the skylight represents a portal to the higher levels of the souls—chayah and yechidah, which normally are not clothed within the body.

As we see, Noah’s ark is parallel to a human being both on a physical and spiritual level.