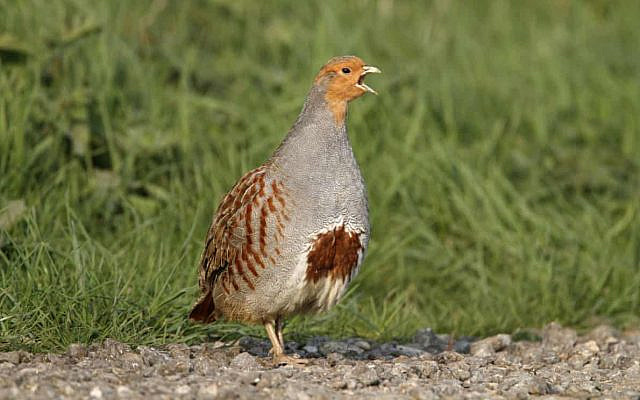 For the few readers who do not speak fluent partridge, or its very similar dialect, pheasant, let me give you a rough translation.

“Whoopee, we’ve caught a break, we needn’t worry about the date. We can enjoy the spring sunshine without fear, nobody is shooting us this year.”

The Glorious Twelfth is getting closer. That’s the start of the shooting season in the UK. For us Israelis, the idea of a short season in which shooting is allowed is a luxury we can only dream about. Terrorists have no problem shooting at us whenever they like; every day is shooting season for the villages and kibbutzim along the border with Gaza.

Of course, like everything these days, the bottom line is money. Enthusiastic shooters spend some £1.25 billion, including £250 million on employment and £82 million on hotels, during the season. According to the director of shooting at the Countryside Alliance, the “environmental, economic and social benefits of shooting are considerable” as it is the “lynch pin of many rural communities” which supports “the equivalent of 74,000 full time jobs”. A drop in demand, or government-imposed restrictions could mean more than £600 million liquidity taken out of the rural economy.

£600 million makes my own losses look pretty unimportant but even this large sum is overshadowed by the eye-watering amounts lost by Warren Buffett. Through his company, Berkshire Hathaway, he had overcome his long-held reluctance to invest in the airline industry and started to build a stake in key carriers back in 2016. He has now reported a loss of £40 billion. He has told his investors that the airlines looked set to “chew up” money.

And another entrepreneur who would be delighted if his customers would “chew up” is the restaurant tycoon Richard Caring. The coronavirus-dictated closure of his restaurants for more than six months would cast “significant doubt” on their ability to continue. He is trying to extend the company’s £72 million credit facility, which is due for repayment on March 31 2021.

“Pooh! My dear, any port in a storm.” Taken from John Cleland’s bawdy novel Memoirs of a Woman of Pleasure, better known as Fanny Hill, this is especially true for the many UK fishing ports that face collapse. European fish markets are in lock-down and many UK supermarket fish counters, restaurants and fish and chip shops are shut. The chief executive of Grimsby Fish Dock said: “We have had no income from the fish market for five weeks. Some ports could go bust in four to six weeks.”

The coronavirus pandemic is taking its toll of the UK’s pubs and restaurants; they are unable to get gas or electricity. The UK’s complicated energy sector has many different suppliers with widely differing prices. Consumers constantly change suppliers to get the best deals. But, some energy suppliers are refusing to take on new customers from the hospitality industry amid uncertainties as to their ability to pay their bills during the lock-down.

But, like the partridges, we do get a break – a break from endless sports programs telling me someone has kicked or batted a ball. Programs giving me the scores of matches I did not watch. What can I say but cluck, cluck-cluck, cluck-cluck-cluck.