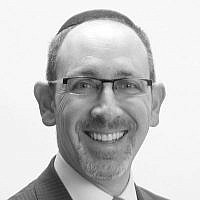 The Blogs
N. Aaron Troodler
A Proud Jew Who's Striving For The Truth
Apply for a Blog
Advertisement
Please note that the posts on The Blogs are contributed by third parties. The opinions, facts and any media content in them are presented solely by the authors, and neither The Times of Israel nor its partners assume any responsibility for them. Please contact us in case of abuse. In case of abuse,
Report this post.

It was supposed to be a regular Sunday. It began with me taking my daughter to her soccer game. We then went to an opening event for my daughter’s school at a local bowling alley. In the afternoon, I began building our sukkah. We went out to dinner to celebrate my son’s birthday. It was supposed to be a typical Sunday, filled with family-related activities. However, the truth is that there was nothing regular or typical about it.

The news broke in the morning that Ari Fuld, a resident of Efrat, had been brutally murdered by a terrorist while standing outside a supermarket at the Gush Etzion Junction. In a final act of heroism, even after being stabbed in the back, Fuld briefly pursued the terrorist and shot at him before succumbing to his fatal wounds.

Although he was my contemporary, I did not know Ari Fuld, although I certainly felt like I knew him. He grew up in New York as did I, and he attended school with some of my friends. After making Aliyah and taking up residence in Israel, Ari became a larger than life figure. His work on behalf of soldiers in the Israel Defense Forces was legendary. He made it his mission in life to spread his infectious love of Israel and disseminate Torah thoughts to people far and wide. While many people use social media sites like Facebook and Twitter to broadcast hate, Fuld used social media as a means to transmit messages of patriotism and hope to the masses. It was through his online presence that I, along with so many others, felt like we knew him. His posts were beacons of light in a sometimes dark and turbulent world, and his videos and written communications spoke to my heart and soul in a profound way.

As an individual who dedicated his life to defending the Jewish State online and on the ground, the horrific fate that befell Ari Fuld does not seem right. Another senseless act of terror in Israel and a man who held dual American-Israeli citizenship is now tragically gone, leaving a wife without her husband and four young children without their father.

It was supposed to be a regular Sunday, but after hearing the heartbreaking news about Ari Fuld, there was nothing regular about it. I went through the motions and tried to get through the day, but all I could think about was what happened outside the Rami Levy supermarket in Gush Etzion.

The 17-year-old terrorist who murdered Fuld is a symbol of a systemic problem that sadly continues to permeate Israel on a recurring basis. The hatred that a teenager must feel in order to draw a knife and cut short another human being’s life is not something that he is born with. That degree of animosity is the result of growing up in a society in which abhorrence of Israel is taught to children at a young age. It comes from living in a culture where acts of terror are glorified, terrorists and their families receive generous salaries, and murdering Israelis is met with celebration, rather than condemnation. The Palestinian Authority and Hamas are knowingly and willingly fostering a hate-filled environment that has led to the loss of too many innocent lives. It is time for the world to wake up and tell the Palestinian Authority that enough is enough. The international community must send a strong and clear message that these heinous acts of barbarism perpetrated against men, women and children need to end. The exaltation of terrorism has to stop before more lives are lost.

As I contemplated what happened to Ari Fuld, I thought of all the heroes who came before him and whose lives were cut short by senseless acts of terror. I believe that we can best honor the memory of Ari Fuld and all the other victims of terror by committing to make certain that they did not die in vain. Despite the regularity with which these acts of terror occur, we cannot become complacent. We must not allow ourselves to become immune to the pain that they cause or resigned to the fact that they are just going to continue happening. When a human life is taken in such a brutal and heartless fashion, it cannot be business as usual. It is incumbent upon all of us to collectively speak out in a loud and forceful voice and combat terrorism. We must take a page out of Ari Fuld’s playbook and speak the truth about what is happening as a result of the terror.

I woke up on Sunday fully expecting that it would be a normal day. Alas, there was nothing normal about it. Amidst the grief and heartache, we need to keep the Fuld family in our tefillot and pray that G-d will grant them the strength and resolve to make it through this unmistakable tragedy. Their pain is our pain, and their loss is our loss. We must always remember that this was anything but a regular Sunday.