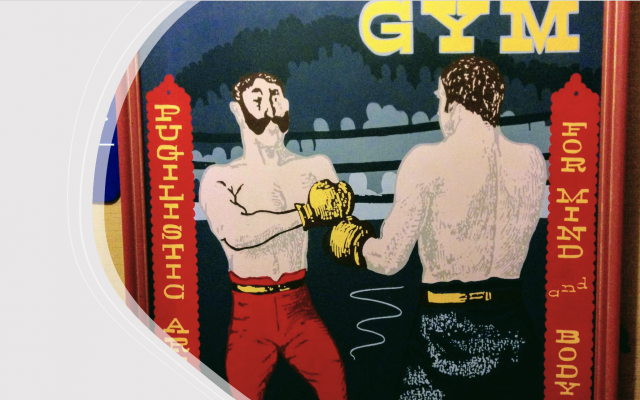 Another strange happening today in synagogue. We were davening the Musaf for Shabbat and I looked out the window, and out of nowhere across the way is group of people outside practicing their boxing on a hot Summer day.

So, as the people in shule are shockeling (swaying) back and forth in prayer, the people right outside the window are bobbing and weaving side to side practicing their fighting. Of course, not everyone swings to the same tune, but this was really sort of comical to watch the back and forth and side to side of the Jewish and gentile practitioners.

I couldn’t help thinking that while we depend on the Almighty L-rd, they look to their own strength and skills. And I remembered from yeshiva day school many years ago, when we used to sing (Psalms 20:7-8):

Some trust in chariots and some in horses, but we remember the name of the L-rd our G-d. They are brought down and fallen, but we are risen and stand upright.

Moreover, this tied so perfectly to the Torah portion this week of Shelach, where the Israelites sent a dozen spies to surveil the Promised Land, and ten of them come back with frightening reports that the cities are fortified and great and concluding (Number 13:31):

We will not be able to ascend against the people, for it is stronger than we are.

Unfortunately, they forgot that it is not by our own mortal power and thinking that we succeed, but rather it is by the will of Hashem and through his outstretched mighty arm. Only Caleb and Joshua of the spies had faith in G-d and said that we can prevail over the nations of Canaan, and we will inherit the land according to G-d’s word.

In Chabad’s L’Chaim newsletter this week, in an article from the teachings of the Rebbe, it asks: What were the spies’ sin? They were asked to surveil the land of Canaan and they came back and reported what they saw, so what did they do wrong? The Rebbe answers that their job was to report back how to best capture the land, not if we can conquer it. Those spies not only lacked faith in Hashem but also, they committed a grave sin in slandering the Promised Land to the people of Israel. Hence, it was a huge chillul Hashem (desecration of G-d’s name) in front of B’nei Israel.

These spies were immediately punished and died by a plague that G-d brought. Further, the Israelites who followed the slander and then wailed about their fate and said they wanted to return to Egypt rather than be defeated by the Canaanites were punished to wander the desert for forty years to die out, along with their generation’s slave mentality, so the next generation could then be fit and meritorious to enter and inherit Israel.

As I watched through the window of the synagogue, the people practicing their boxing, I remembered when I was young and learning to fight. It took an enormous amount of training, hard work, and practice, and still at the end of the day, the realization always that we are but the foot soldiers for G-d. We must be the best prepared in every way that we can (“Never again!”); however, it is G-d who not only leads us, but also fights for us. In the Prophets (Joshua 6), we learn that Hashem literally brought down the walls of the great city of Jericho simply by having Joshua and the Israelites march around it, blow the Shofar, and yell a great shout. So too may G-d continue to fight for us against the enemies in our time and speedily complete the final redemption.