The Blogs
Nevet Basker
Apply for a Blog
Please note that the posts on The Blogs are contributed by third parties. The opinions, facts and any media content in them are presented solely by the authors, and neither The Times of Israel nor its partners assume any responsibility for them. Please contact us in case of abuse. In case of abuse,
Report this post. 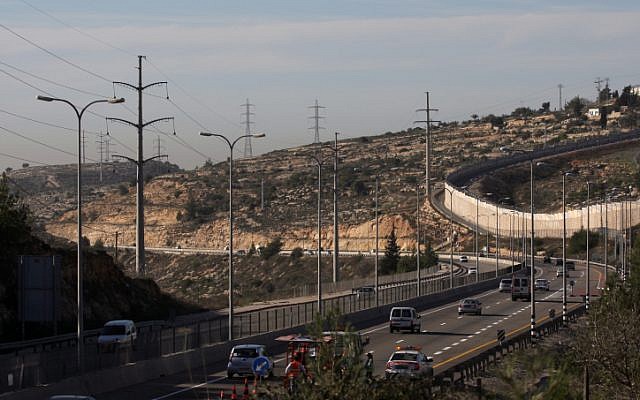 Illustrative. The security barrier near the settlement of Beit Horon on Route 443 (Kobi Gideon/ Flash 90)

First, a disclaimer: Even if something is not illegal, it can still be wrong strategically, diplomatically, politically, or morally. I do not support the broad Jewish [re-]settlement project in Judea and Samaria/the West Bank. But the US is correct in saying that settlement construction is not illegal under international law.

The previous official American view, that building homes for Jews in the West Bank is illegal, is grounded in a 1978 State Department memo. The very first sentence of that document states its purpose: it is a response to a “request for a statement of legal considerations underlying the United States view that the establishment of the Israeli civilian settlements in the territories occupied by Israel is inconsistent with international law.” In other words, the State Department had predetermined that Israeli settlements were “inconsistent with international law,” and asked its legal adviser, Herbert Hansell, to supply legal arguments supporting this view. There is nothing wrong with such advocacy — attorneys and legal representatives regularly support a specific opinion or outcome, like representing clients they know are guilty — but it should not be confused with impartial legal analysis.

Beyond its purpose, the memo relies on two findings: First, that the West Bank (and, at the time, the Sinai Peninsula, Gaza, and the Golan Heights) meet the legal definition of “occupied territories.” And second, that Israeli civilian settlements in these areas violate Article 49 of the Fourth Geneva Convention. Mr. Hansell does not identify the state whose territory is allegedly occupied; indeed, he acknowledges doubts regarding the claims of Egypt (to Gaza) and Jordan (to the West Bank), but explicitly states that it makes no difference whether there is any ousted sovereign at all.

But how can territory be considered “occupied” by Israel if it has no other legitimate sovereign? In fact, a century of international agreements and treaties promises the establishment of “a national home for the Jewish people” in these lands: The 1917 Balfour Declaration, the 1920 San Remo Convention and Treaty of Sèvres (Article 95); the League of Nations Mandate for Palestine; a 1922 Joint Resolution by the US Congress, signed into law by President Warren Harding; the 1924 Anglo-American treaty, and the UN Charter (Article 80). The 1978 State Department memo does not renege on, or even address, these previous commitments.

Even more dubious is the claim that building homes for Jews in these areas is a violation of Article 49 of the Fourth Geneva Convention, namely that the “The Occupying Power shall not deport or transfer parts of its own civilian population into the territory it occupies” (paragraph 6). Even if one accepts that the West Bank is occupied, how does voluntary settlement of Israelis constitute “deport[ation] or transfer,” under any reasonable reading of these words? Hansell’s reply is that “determining the location of the settlements, making land available and financing of settlements, as well as other kinds of assistance and participation in their creation” violate the intent of paragraph 6. So according to this far-fetched legal definition, issuing building permits and offering tax incentives equals “transfer” of civilian population!

But even if one were to accept the 1978 memo at face value, fundamental changes have taken place in the intervening four decades. First, subsequent US administrations, both Republican (Ronald Reagan, George W. Bush) and Democratic (Bill Clinton) explicitly rejected or implicitly disavowed the analysis and its conclusions, and they were never enforced. Moreover, the same conclusions were never applied to other disputed and occupied territories — Turkey in Cyprus, Morocco in Western Sahara, Russia in Crimea, or anywhere else in the world — undermining a basic principle of the rule of law.

In 1988, King Hussein of Jordan announced “full legal and administrative disengagement from the West Bank,” renouncing previous claims to the territory and paving the way to the 1994 Israel-Jordan Peace Treaty. And in 1995, the Palestinian Liberation Organization and Israel signed the Interim Agreement on the West Bank and the Gaza Strip, better known as the Oslo Accords, providing full Israeli security and civil control over “Area C,” which includes the settlements. The Palestinian Authority, created by the Oslo agreement, accepted these terms, as an interim state pending permanent-status negotiations. Israeli civil control includes, obviously, municipal issues like zoning and construction permits, in the same way the Palestinian Authority controls zoning and construction in Area A, under its jurisdiction.

The legal arguments of the original 1978 memo — a finding of “occupation,” and that settlements violate of the Geneva Convention — were highly questionable at the time. They were promptly reversed by subsequent administrations, never enforced, and never applied to disputed territories elsewhere in the world. And with the explicit disavowal of the Kingdom of Jordan and agreement by the Palestinian Authority, there is no question that Israel has full legal right to build settlements in Area C, and Israelis have full legal rights to live in these settlements.

Again, the fact that the settlements are legal does not mean that they are advisable. This is a different question, a subject of much debate and discussion.

Nevet Basker is the founder and executive director of Broader View, an online resource center about Israel and the Israeli-Palestinian conflict. Any later updates and additions to this article can be found here. I welcome your feedback.