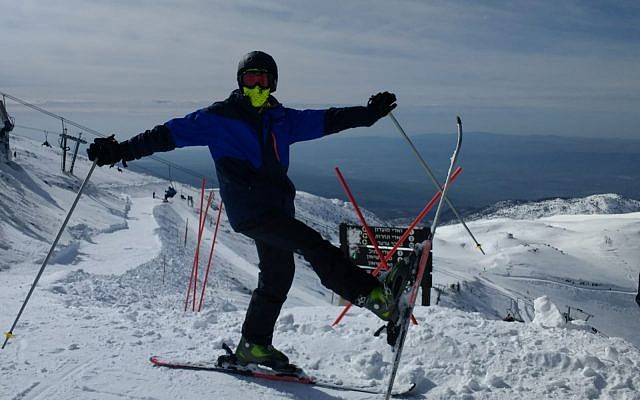 My 18-year-old is amazingly energetic and creative and always planning his next adventure. With snow on the way last week in Israel, he made tentative plans to go skiing in the Hermon with friends. But all of the car options fell through and it looked like he might not make it.

But never fear. Saturday night he took a bus from Gush Etzion to Hispin in the Golan and spent the night (more like a few hours) with a friend. They had secured two cars, and the eight of them headed from Hispin early Sunday morning to get to the Hermon.

Now, there is only one ski slope in Israel and when the snow falls and the conditions are right – the place is mobbed. He and his friends knew this and planned accordingly. They left Hispin at 3:30 or 4 in the morning and made it to the nearest community outside of the Hermon at 5:15 to get in line for ski rentals. The rental place apparently opens at 5:30 and they were fifth in line. With their ski equipment in hand, they raced back to their cars to get in line for the Hermon. The army only opens the gates at 7:30 and, when they arrived at 6 a.m., they were in line with 100 cars to get in. Looked like a good time for morning prayers, and they all got out of their cars, gathered others together and had a minyan. Oh Israel, how I love you.

When the gates opened at 7:30, my son and his friends were ready to go. They were on the slopes by 8 and had an amazing morning.

When he called me at about 4 p.m. to check in, I told him that I had heard that it was so crowded up there that they had closed the Hermon to incoming skiers at 1:30.

There was a pause.

“Um, Mommy, you didn’t hear the news? Oh man I probably shouldn’t even tell you.”

But tell me he did.

Apparently, Syria shot a missile at Israel in the afternoon. Everyone skiing heard the massive sound and looked up to see two of our Iron Dome missiles shooting straight up into the air before turning to connect for a direct hit with the Syrian one.

“What did you do afterwards? Did they close the slopes?”

(By the way, the ski slopes were eventually closed as a precaution.)

Never mind the missiles. The reason that he was calling was that his friends were heading home in another direction and he wanted to see if I could put a message on one of the local lists to get him a ride. I did not manage to find him a ride, but of course he did.

“Oh, that was a great story, Mommy. When we got to the parking lot in the Hermon, I started yelling ‘Is anyone going to Jerusalem?!’ but no one was. Then we went to the place to return our skis and I saw a large family with a big van. I asked them where they were going. Jerusalem! I asked if I could go with them and they said – sure but we need to get food so we are stopping for dinner. And I said – amazing I’m starving! So, I ate dinner with them and they brought me to Jerusalem.”

Every time that he tells me a story like this, all that I can do is look at him in wonder. His can-do attitude, his ingenuity, his energy and his love of the country are all exactly why this little nation of ours will continue to thrive, create, reinvent itself, and excel.

Even when missiles try to interrupt your perfectly planned ski day.