The Blogs
Elaine Rosenberg Miller
Apply for a Blog
Advertisement
Please note that the posts on The Blogs are contributed by third parties. The opinions, facts and any media content in them are presented solely by the authors, and neither The Times of Israel nor its partners assume any responsibility for them. Please contact us in case of abuse. In case of abuse,
Report this post.
Many people in the U.S. knew Ari Fuld. He was a tireless advocate for Israel, an Israeli American lover of Zion. He came to America often to speak on behalf of Israel. He was a passionate and successful communicator.
I met him when he spoke in our synagogue in Palm Beach, FL.
I remember thinking how energized and articulate he was.
The news reports say he was only 45 years old.
I had thought he was older.
Not that he looked older but that his manner was one of someone who had seen much, knew much and now, in retrospect perhaps he intuited that he didn’t have that much time.
Although he spoke on Shabbat and was probably weaponless, one could easily imagine a rifle slung across his broad shoulders.
He was authentic. He was the real thing.
He was a modern day Israeli who had seen war and death and was determined to defend his people and his land.
We here in diasporaen south Florida have met many Israelis who have lost children and other family members.
They have one thing in common. They always return to Israel.
I recall the sole survivor of the Dutch family killed in the Sbarro terrroist bombing.
He was a slender, blond young man.
We could barely speak with him.
But he, too returned and we heard that he had married and started a family. Our hearts leapt.
We are all one nation, united by history, faith, hopes, dreams, aspirations and deeds.
Aril Fuld was a fearless warrior, a geber, a shomer.. May his memory be a blessing.
I remember one more thing about Ari Fuld that Shabbat in Palm Beach..
He told me how much he was looking forward to reuniting with his family in Israel when his visit was over. 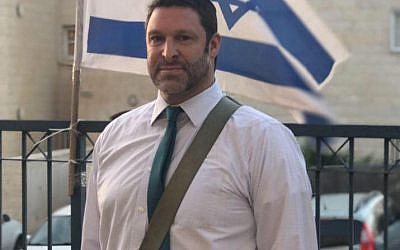 About the Author
Elaine Rosenberg Miller writes fiction and non-fiction. Her work has appeared in numerous print publications and online sites, domestically and abroad, including JUDISCHE RUNDSCHAU, THE BANGALORE REVIEW, THE FORWARD, THE HUFFINGTON POST and THE JEWISH PRESS. Her books,, FISHING IN THE INTERCOASTAL AND OTHER SHORT STORIES, THE CHINESE JEW. THE TRUST and PALMBEACHTOWN are available on Amazon and Kindle.
Related Topics
Related Posts
Comments