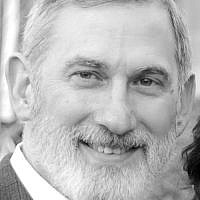 The Blogs
Elisha M. Prero
Apply for a Blog
Advertisement
Please note that the posts on The Blogs are contributed by third parties. The opinions, facts and any media content in them are presented solely by the authors, and neither The Times of Israel nor its partners assume any responsibility for them. Please contact us in case of abuse. In case of abuse,
Report this post.

Richard Chasman, a frequent blogger for The Times of Israel, died last week. He was 83. I was his rabbi.

The Talmud teaches that just as one person’s face differs from virtually all others, so do peoples’ personalities and the way they think. Every individual is unique. G-d made us this way, the rabbis explain, because each of us has a unique divine mission to fulfill.

Dr. Richard R. Chasman was nothing if not unique.  And he pursued the fulfillment of his mission every day.  He was born in 1934 to Cantor David and Pauline Chasman (nee Grossman) in Lynn Massachusetts.  Something of a boy wonder, he graduated Malden High School second in his class at age 16 and Harvard College (BS, Phi Beta Kappa) and Boston Hebrew Teacher’s College at age 20.  Richard earned his PhD in Physics from UC Berkley in three years and at the tender age of 23 began his nearly 60-year career with his only employer, Argonne National Laboratory.  At some point in his career, he gave up his high-level security clearance, so he would not find himself developing weapons of mass destruction.

I first met Dr. Chasman when I joined Young Israel of West Rogers Park (Chicago) as its rabbi some 24 years ago. What an interesting couple they were, Richard and Rose Ann. He, the ever-precise scientist; she, the visionary artist.  Both were well read.

Dr. Chasman was the driving force behind our shul’s weekly Mishna class. He would likely be surprised to hear anyone refer to him as a “rebbe”, a classic teacher of Torah, but he was just that to so many in the shul. He was patient with everyone who came to learn, and displayed a low-key sense of humor. He was always soft-spoken; never angry.  Sometimes he would gently tease. He treated everyone – even those with slim backgrounds in formal Jewish study like they belonged there just as much as anyone else.

Although he never studied in a yeshiva, he was dedicated to Jewish learning.  He attended regular classes in Talmud and Jewish law.  He read voraciously and wrote prodigiously.  He authored or co-authored dozens, perhaps hundreds of research papers.  He seemed to squeeze time out of thin air.

Some have described Dr. Chasman as an honorary yekke. Mishna class would generally start exactly on time. In the rare instances that it started a few minutes late, he would say they should stay a few extra minutes. There was little chit chat when he ran the class, just learning, but it was very pleasant learning.  Over the decades his consistency bore fruit: the weekly Mishna class completed shas – all six orders of the Mishna –- not once, but twice. Most recently, he began learning Tanach, starting at the beginning, with the book of Joshua.

His timeliness was legendary. With rare exception — for decades — he was on time, or early, to every service, every class and, probably, everything else. One regular attendee remembers the time he was astonished to see Dr. Chasman arrive late to a service. Turns out, he had slipped and fallen on some ice, forcing him to walk more slowly than usual.

He was encouraging to congregants of all ages. A young man of bar mitzvah age said “Dr. Chasman encouraged me to become more involved in shul. When I was still not 100% comfortable davening in front of people, he would ask me to sing Anim Zemiros or lead the davening. It meant a lot to him that I did it, so I couldn’t say no.”

Richard and Rose Ann would invite newcomers to their Shabbat table. People enjoyed spending time with them, and not just because of the food. Talking with both of them was always stimulating and engaging. Although Richard was a brilliant chemical physicist, he was a Renaissance man, with a broad range of interests that were anything but superficial – from music, to Mishna, to current events.

After Rose Ann passed away, it was Richard’s turn to be hosted. People enjoyed when he came over for Shabbos and Yom tov. One member of a host family reported, “He always tried to get to know us, what we were interested in, what was new in our lives, and then he always remembered to ask us about it the next time he came over.”

He encouraged people who had little formal background and those seeking to convert. He was reassuring and shared words of confidence: “You are going to do well.” His words made a big impression.

During Kiddush one Shabbat, he told one young woman who doesn’t have family in the community, “My Rose Ann would want to adopt you if she were still here.” He created a sense of family and belonging.

A host observed “He was incredibly humble and so, so kind. Over the past few years, Dr. Chasman would often join us for holiday meals. I felt proud that he would choose to join our family for a meal. He never wanted to talk about himself; instead his conversations focused on other guests. Which is why I would intentionally ask him to please tell the other guests about his work or his background — to which he would smile in his gentle way and say something like, “I’m a nuclear physicist, it’s no big deal.”

He died the way he lived; he refused to tell us how and to what degree he was ill. He simply didn’t want the attention.

While Dr. Chasman was mostly mild mannered, even reserved, a traditionalist and an intellectual, he was hardly a shrinking violet. He was a principled iconoclast, passionate about Zionism, integrity and liberal values, who was not shy about standing up and speaking out for what he believed was right and just. As a rebuttal to what he perceived as the right-leaning reporting of the Israel News, a Chicago-area weekly, he founded and published Chovevei Tsion, a newsletter largely about Israel. His opinions were often controversial, his characterizations blunt. I witnessed more than one confrontation with a reader in the shul who tried to deep-six his stack of newsletters. Dr. Chasman would not back down. I am proud that we at Young Israel supported and defended his right in our little shteibel to express views with which many –- including I –- frequently and strongly disagreed.

He was a connoisseur of things intellectual and expressed his views cogently. Some of his opinions found their way to the pages of The Times of Israel.  We would explore each other’s political positions and sensibilities. He knew just how long a rabbi should speak. We disagreed on that too. We would discuss a midrash, a halacha, a difficulty in a mishnah. He was ever refined. He would always greet me at the end of services with a warm “Good Shabbos”. If he particularly liked my speech, he would say “yasher koach,” kind of a scholarly “well done.” When he said it, I knew he meant it. I appreciated, even cherished, his positive evaluations.

G-d makes us each unique, so we will be perfectly suited to accomplish our divine missions. Dr. Chasman’s life stands as a lesson on how to make each moment count.  Mission accomplished.

About the Author
Elisha Prero is Rabbi of Young Israel of West Rogers Park, a practicing lawyer in the Chicago metropolitan area and plays in the Jewish rock band, Even Sh'siyah (www.thewayjewsrock.com).
Related Topics
Related Posts
Comments