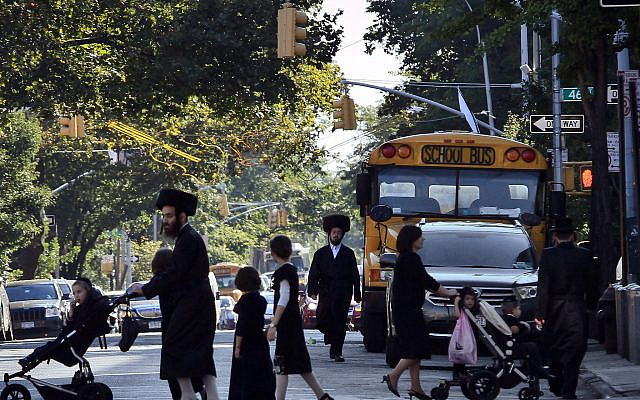 Illustrative — In this September 20, 2013 file photo, children and adults cross a street in front of a school bus in Borough Park, a neighborhood in the Brooklyn borough of New York that is home to many ultra-Orthodox Jewish families. (AP Photo/Bebeto Matthews, File)

Sunday’s front page New York article Times article about the deficiencies in New York’s Hasidic schools evoked powerful emotions from many directions. Discussions of how much English and math should really be part of curricula in those schools, how much power the government should have over what happens in religious schools, and do graduates of those schools go on to be self-sufficient citizens of the world are all questions passionately debated. Yet, more than anything, the article brought me back to my early days in elementary school.

I grew up in Jerusalem’s then newly built Har Nof neighborhood to parents who emigrated and made aliyah from North America. There were two schools in the neighborhood, a religious Zionist Mamlachti Dati public school and a more Haredi Talmud Torah. Not Hasidic, not extreme, just a mainstream Haredi Talmud Torah belonging to the Chinuch Atzmai movement in Israel. For first grade, my parents chose to send me to the Talmud Torah. I do not remember much of what I learned in that school. I did not have many friends, I was beaten by other kids, and as the grades progressed, I kept falling behind, and the humiliation and denigration by the teachers increased. As the situation inside the classroom because worse, my presence outside the classroom increased. I spent time dodging school, in the schoolyard, and even in the forest at the back of the school. Not great memories, yet not too terrible either.

Yet worse than any memory was the memory of a classmate being hit by a teacher. Not all teachers hit; only one did. But hit he did. While I was not the one he chose to hit, and while his hitting was not the kind that left bruises or anything broken, sitting and watching your classmate being hit was the most traumatizing of all. There is something about knowing that it could be anyone, knowing that an adult is engaging in an act of violence against a child, knowing that a classmate of yours is helpless while suffering, leaves its mark on every child.

One day in fourth grade, after an outdoor recess, I remember finding myself on the ground in the schoolyard after all the kids piled on me and nailed me to the floor. The bell rang, and everyone ran back to their classes. I remember laying there in the yard, looking at the blue sky, and deciding I am not going back. I got up, dusted myself up, and at 11 a.m. or so, walked out the school gate, and went back home. No one stopped me or asked any questions. In the evening, I told my mother I was not going back to that school.

At home, I got tutors so I could catch up on the years of education I had missed, and eventually signed up to the religious Zionist Mamlachti Dati school, where I had to go down one grade due to the gap between my knowledge and what the educational standards were for my age. Oh, and the school I left? After two weeks or a month after I left, someone noticed that I was no longer there and called my mother to see what had happened. She told them that that phone call was just another example of how poorly they had cared for their students, and that is why I would not be returning to the school. No friend or parent from the school said anything. When I was there, it was as if I was not there, and so it was when I left.

The debate about yeshivas and education in New York should never be about government intervention, educational standards, or budgets – it should be about children’s wellbeing. The Hasidic community can mobilize all the law and PR firms it would like to defend the independence of their schools. Yet if they do not show a keen desire to protect the well-being of children, they will carry little to no credibility among parents, government officials, and the wider community.

As I read through The New York Times article, I shuddered to read that:

“Still, virtually all of the dozens of parents of current students interviewed by The Times said their sons had been hit at least once. Several said they had sought to protect their children by ‘tipping’ their teachers, usually about $100 a year.

“Over the past five years, the New York City Police Department has investigated more than a dozen claims of child abuse at the schools, records show. It is not clear whether anyone was charged in the incidents.”

While I respect the desires of groups like the Amish community in Ohio and Pennsylvania and Hasidic Jews in Crown Heights and Williamsburg for educational independence, the State of New York must do everything it can to protect the safety of each and every child. As Jews, we cannot jump to the help of other Jews in some cases while ignoring others. If thousands of Hasidic children live in the shadow of teachers’ violence and intimidation, we cannot remain silent. We must all be there for them.