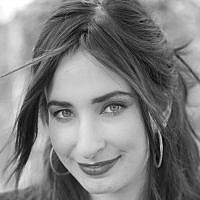 The Blogs
Nechama Eisenman
Apply for a Blog
Please note that the posts on The Blogs are contributed by third parties. The opinions, facts and any media content in them are presented solely by the authors, and neither The Times of Israel nor its partners assume any responsibility for them. Please contact us in case of abuse. In case of abuse,
Report this post.
The morning after.
This weekend, I enjoyed a beautiful שבת getaway with family, thanks to our dear Grandma on her 88th birthday (Take that, Hitler!).
But beneath the laughs, bonding, and delicious food was a 20-year-old memory, scratching at the walls of my psyche…
“Remember,” it willed.
In a voice hoarse from the rust of a still-grieving America, it begged me to remember: September 11, 2001.
A day so devastating, so incomprehensible, it must be referred to simply by its date… 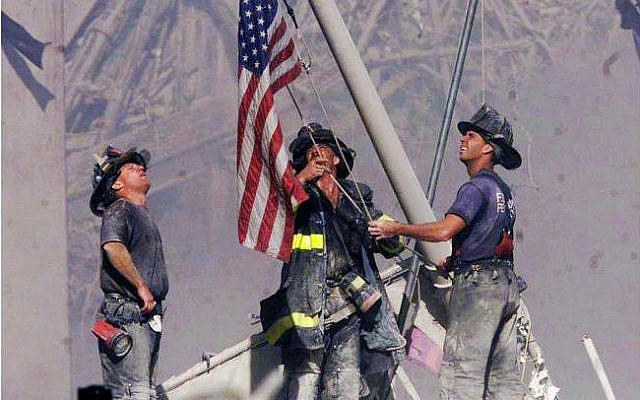 Three firemen raising an American flag in the wreckage of September 11, 2001. (Twitter)
Because commemorating a tragedy of this magnitude with a location, a la “Pearl Harbor” or “Sbarro Bombing” could never even begin to convey such a gruesome picture…
Because dates connote a significant moment, and the events it shaped.
Before, after. Then, now. Past, Future.
July 4, 1776: We became a nation.
September 11, 2001: That nation threatened to crumble.
September 12, 2001: Got stronger.
20 years and I still remember where I was (7th grade, between Chumash & Navi, prepping for our first school field trip)
We ate dinner in my parents’ room, unable to tear ourselves away from the news.
Debris, no, bodies (!), falling from those glorious towers. Towers – like a word from a fairytale: ivory, strong, impenetrable. Fortress.
And like twins, together, they fell.
But the higher you are, the harder you fall.
We bandaged our bleeding hearts with American flags – one on every door.
No longer only in Middle America, those stars and stripes spoke for us when we were left with no voice. “In America, we trust, in God we trust.”
Come what may.
If you look beyond the glitz and glitter, you can still feel the pall in NYC.
The smoke cleared, but the dust hasn’t settled.
There’s a layer of sadness in the city; my soul still feels it 2 decades later – does yours?
They say New Yorkers are callous. Can you blame them?!?
To experience such hate, terror, and destruction on their soil – Shaking every freedom we stood for?
Israelis will get it, I know. It’s the defense mechanism that comes from trust broken.
Hope, buried in the cries of the innocent, their blood drowning out the sound of a brighter tomorrow.
It’s the jaded face of innocence lost…
Of knowing that evil can reach you anywhere – in your place of worship, in your warm bed, even 30,000 feet in the air.
But in spite of this, or even because of it, we all began to love a little deeper.
We held onto the good times before they were snuffed out in an instant.
We took not for granted the freedom we had and what freedoms we regained.
We waved that flag a little higher…
Proud of who we were, and the battles we fought to get here.
I do believe that the America of September 12 is within reach.
We spend so much time being SJWs, marching for equality, hashtagging, and “acronyming” movements, but unity and peace can be as simple as each waving the SAME flag…
That “star-spangled banner” –
“O’er the land of the free and the home of the brave.”
Once upon a time, it was enough to connect us all. To cloak us in hope and unity.
Whatever your stripe – red or white, white or red, we each sparkled like stars in an inky blue sky. Both as individuals, and United. The terrorists tried to shatter that unity.
Let’s do whatever is in our power to make sure they didn’t succeed.
Heroes of September 11, we will never forget you. From the kedoshim on those flights and their families, both alive and yet to be born…
To the firefighters, policemen, employees, and visitors of the World Trade Center, and THEIR loved ones…
We mourn you, and the America that was, today and every day.
May your memories be a blessing.
About the Author
Nechama Eisenman is a 9 year consecutive winner of the "World's Okayest Mom" title, and never met a carbohydrate she didn't like. She rejoices in finding G-d in the mundane, is madly in love with her husband and 3 little girls, and relies on spurts of infectious baby giggles to get through the day.
Related Topics
Related Posts
Comments