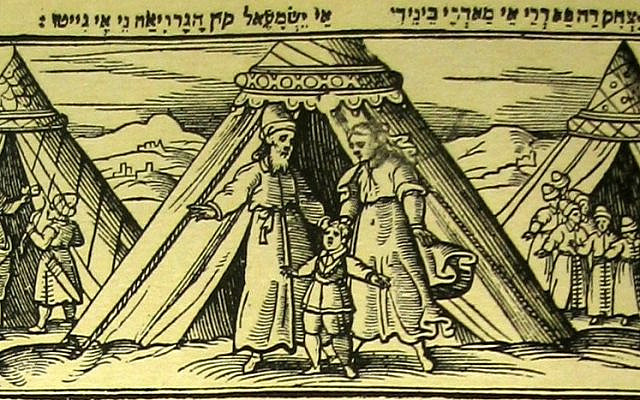 Keturah, one of Abraham’s three wives, with her children (right); Sarah and Isaac are in the center, Hagar and Ishmael are on the left. From the Venice Haggadah of 1609. Courtesy of Wikimedia Commons.

All week long, I’ve been dreading the elections; it was pretty clear to anyone who was even vaguely aware of what’s going on in the world, that it was going to be bad—the only question was how bad was it going to be.  We still don’t know if we are going back into the Middle Ages, but the threat is there. However, we have to pay attention to vox populi: the people have spoken. Ironically, I taught the chapter about God telling Abraham that he is to have a son by Sarah three times this week, and each time I noticed something which I usually do not notice.  In light of the elections, I think it is very important to point this out.  So, let’s look first at the passage from Genesis 17 which has preoccupied me all this week with my running commentary to accompany the text:

15And God said to Abraham, “As for your wife Sarai, you shall not call her Sarai, but her name shall be Sarah.* 16I will bless her; indeed, I will give you a son by her. I will bless her so that she shall give rise to nations; rulers of peoples shall issue from her.”  17Abraham threw himself on his face and laughed, as he said to himself, “Can a child be born to a man a hundred years old, or can Sarah bear a child at ninety?”

Rather than be thrilled about the news of a new son, he reacts as follows:

18And Abraham said to God, “O that Ishmael might live by Your favor!”

What does this phrase mean? What’s Abraham’s concern? God is not too happy to be interrupted and goes on with His original message:

19God said, “Nevertheless, Sarah your wife shall bear you a son, and you shall name him Isaac; and I will maintain My covenant with him as an everlasting covenant for his offspring to come.

Just in case that Abraham is still worried about Ishmael He reassures Abraham:

20As for Ishmael, I have heeded you.* I hereby bless him. I will make him fertile and exceedingly numerous. He shall be the father of twelve chieftains, and I will make of him a great nation.

Lest Abraham be too happy, He reminds him, once again, who is the chosen one:

21But My covenant I will maintain with Isaac, whom Sarah shall bear to you at this season next year.”

And then God leaves and Abraham is now on his own:

22And when He was done speaking with him, God was gone from Abraham.

So now Abraham is going to have to make choices on his own for “God was gone” from him, and as we will see below, the first move he will make is to undergo circumcision, as God had commanded him earlier.

Abraham is content to have Ishmael be his only heir. It is God poking his head into the affairs of men who declares that ONLY Isaac, Sarah’s son will have the covenant bestowed upon him.  So Abraham has a right to be concerned. Is he going to have to dispossess Ishmael? Is he afraid that God will kill Ishmael, when he says: “Would that Ishmael might live by Your favor!” He has good reason to fret about the consequences of one child being chosen over the other. In the past when one person was chosen, the other was endangered. Witness, the choice of Abel that led to his death; the choice of Noah that led to the death of most of humanity. Finally, the choice of Abraham had the background of one brother dead, and another one left behind. So, is Abraham beseeching God not to kill Ishmael? It would seem so, if we look at Nachmanides’s (Ramban) commentary on the passage “Would (lu) that Ishmael might live by Your favor!”

After a lengthy exposition of the meaning of the word lu, Ramban comes to a very interesting conclusion:

Abraham thus said: “If Ishmael live before Thee, I will be pleased with this blessing with which Thou hast blessed me, namely, with seed from Sarah.” For since He promised him at first, one born of your own body is to be your heir, and the heir was to be one person, Abraham had thought that this referred to Ishmael. But now that he was told that he will beget a child from Sarah and he understood that this child was to be the heir, he feared lest Ishmael die. Therefore, he said “O that Ishmael might live before Thee”. Rashi explained the verse: “Live in reverence of Thee”; and Onkelos renders, ‘Worship Me.’” But this is not correct, since He said, And as for Ishmael, I have heard thee. If the sense of Abraham’s prayer is, as Rashi explained, that Ishmael live in reverence of God, how could God assure him of that, since, as the Sages express it, “Everything is by hand of Heaven except the fear of Heaven,” which is in the hands of man to be determined by his free choice. Instead, its meaning is that he live and his seed will always exist. (Charles B. Chavel’s translation of Ramban’s commentary on Sefaria site)

WE MUST REMEMBER ISHMAEL

Ramban recognizes Abraham’s existential fears about his son and that Ishmael has a right to live and that his seed will always exist. However, it would appear that there is still a conflict as to who is the real heir, certainly in Abraham’s mind. Ishmael is clearly Abraham’s lawful son who also gets a covenant, when he is circumcised. The phrase “his son Ishmael” was repeated three times. Ishmael is Abraham’s son.

However, there is no conflict in God’s mind. In the next passage below, God refers to Ishmael as “the boy” and also as “the slave’s son”. And with full confidence and God’s backing, Sarah, the chosen vehicle, will say in next week’s portion, to Abraham:

“Throw this slave girl and her son out. The son of this slave girl (ben ha-amah ha-zot) is not going to share in the inheritance with my son Isaac!” This grieved Abraham greatly, on account of his son. But God said to Abraham, “Do not be grieved over the boy or your slave. Do whatever Sarah tells you, for it is through Isaac that the offspring shall be called yours. Yet I will also make a nation out of the children of the slave’s son, for he too, is your offspring” (Gen 21: 16-13).

This wavering on Abraham’s part is totally normal. What is not normal is God’s choice of Sarah and Isaac. The pressure on Abraham must have been very intense. Yet despite this, it is he who will send Hagar and the boy, getting up early in the morning (va-yashkem ba-boker) casting them out with only some bread and water, to possibly die in the wilderness of Beersheba. Ironically, he will also get up early in the morning (va-yashkem Avraham ba-boker) to trudge to the land of Moriah to sacrifice Isaac.

THE ELECTED SON AND ELECTIONS

The results of the elections are in: It would seem that the voice of the people is to follow in the road that will disenfranchise many. Arik Ascherman writes in his blog today:

“The very fact that such a large percentage of Israelis voted for racist, ethnocentric, homophobic, violent, hate-mongering and possibly fascist candidates cries out “darsheini.” Explain me. I have always believed that the majority of our people do not support the evil that I see almost every day harming both Jews living in poverty, and certainly non-Jews.” https://blogs.timesofisrael.com/what-i-need-to-hear-from-fellow-israelis-after-our-elections/

The voice of the people has interpreted God’s message as that of choosing Isaac over Ishmael. Just like the Sara of today, Sarah’s voice of banishing those she does not like and of demonizing them (that woman—ha-amah hazot!) is alive and well. 65% of the population have seemingly gone backwards in their choice of a theocracy and a militant government. However, implicit in God’s message, even as he allows Ishmael to be sent away is that Ishmael is to live forever and be strong among us. We have to listen to Abraham’s musings—that of the minority, rather than heed Sarah’s dominant voice. Abraham is not convinced that God is correct; he has his doubts—he continues to see Ishmael as his son, even as he agrees to his banishment. One can argue that he stands on the fence. He hasn’t voted one way or the other. Yet is that really the case? The midrashic tradition connects Keturah, the wife Abraham marries after Sarah dies, as Hagar:

I always wondered about this.  Is it to show that he is monogamous and doesn’t marry multiple wives? Rather than take a third wife, he goes back and takes the mother of his first son back, the one that he banished. He also continues to have good relations with his first son, and apparently Ishmael has good relations with him as witness the fact that he shows up at his funeral:

“His sons Isaac and Ishmael buried him in the cave of Machpelah…” (Gen 25:9).

Not only does he have good relations with him, but Isaac settles near Beer-lahai-roi, which is associated with Hagar and Ishmael. We then read the genealogy of “Ishmael, Abraham’s son, whom Hagar the Egyptian, Sarah’s slave, bore to Abraham.”

There are clearly two traditions: one which sees Ishmael as legitimate, as Abraham’s son, and the other which sees him as the son of Sarah’s slave. It would seem that these two traditions are irreconcilable. However, we should engage in a textual study to show that there is more than one tradition. In the wake of the results of the elections, the wise person only needs a hint to get the point– dai be-hakimah de-remizah.