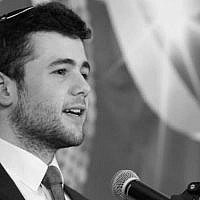 Although the International Holocaust Remembrance Alliance (IHRA) definition of anti-Semitism is being increasingly adopted and backed by the likes of the Board of Deputies of British Jews, there has been a recent and very public debate over the adoption of this definition by higher education institutions around the country. IHRA formulated the definition to combat the rise in attacks and force accountability on the perpetrators and those responsible for them. It was designed to be a working definition meaning that it can be discussed and has the potential for change should it be necessary. It has become widely accepted across the globe (31 countries, 130 UK local councils).

There is still a significant voice unjustly proclaiming the definition unfit for use and dictating to the Jewish people what they are — and are not — allowed to call their own oppression. This unique phenomenon is not just illogical but also setting an exceptionally dangerous precedent in denying groups of people the right to decide what is offensive and discriminatory towards them.

Why is this definition up for so much debate and what, if anything, is so wrong with it? The most significant claim is the impact this has on Palestinian solidarity and that it offers security and legitimacy towards Zionism. Example 7 in the definition reads:

“Denying the Jewish people their right to self-determination, e.g., by claiming that the existence of a State of Israel is a racist endeavor.”

I take great issue with this accusation. The claim is that this rewrites the history of the Palestinians in the land and erases the concept of a Palestinian state. This is just not true. To campaign for Palestinian self-determination and at the same time deny this right to the Jewish people is a clear façade for ulterior motives. Why should Jews be held to a different standard? If you want to campaign for self-determination for peoples, the Jews are no exception. To delegitimise a genuine campaign against anti-Semitism in the name of Palestinian solidarity is merely using the Palestinian people as a convenient excuse to mask a vicious form of delegitimization against the Jewish people and their right to a nation-state.

Jewish students need protection on campus. At the University of Warwick, a lecturer was reportedly recorded saying that “the idea that the Labour Party is antisemitic is very much an Israeli lobby kind of idea”. IHRA protects Jewish students from claims that their oppression is exaggerated, and it protects them from being attacked because of Israeli politics and considering examples like the one at the University of Warwick, there is a clear need for it. Jewish students need protecting. By not adopting IHRA, higher education institutions are not just neglected their duty of care, but blatantly showing they do not care.