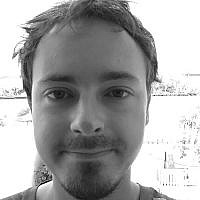 The Blogs
Martin Zelinka
Apply for a Blog
Advertisement
Please note that the posts on The Blogs are contributed by third parties. The opinions, facts and any media content in them are presented solely by the authors, and neither The Times of Israel nor its partners assume any responsibility for them. Please contact us in case of abuse. In case of abuse,
Report this post.

Beautiful people, you live in the same world as I do but somehow I never noticed you. The lyrics written by Melanie Safka talks in a way about my previous relationship with Israel. Sure, I read a lot of books about this land. I saw some movies. But literary and film characters are just bounced rays in a mirror of imagination. Flashes from a distant reality. As cemeteries are the mirrors of the people that used to live here. I like visiting Jewish cemeteries in my homeland. They are calm and silent. Abandoned. The silent witnesses of the vanished part of the Czech folk. Jewish graves were always a mystery to me. I could not read the writings at the gravestones. They seemed more like paintings, pictures, than real letters. Maybe these silent moments brought me after 25 years of my life to Israel.

First thing I ever noticed in this land were smiling people everywhere. Much more real than the characters from all the stories in books, from the news, and from movies. An anonymous crowd of figures with a question mark instead faces turned into real people. As I study history, different people sometimes seem like one group in this field of science. Nations, classes, religious groups. I know it is important to simplify the history to understand it. But, please, do not forget about the people. Real people with fairy-tale-like names like Ayala, Laila, Eli, Maja, Tamar or Noa.

I shall not forget about my neighbors who invite me for lunch sometimes. My roommates that help me in understanding the new environment around. The shop assistant from the grocery who never replies to my „Shalom!“ but despite this I know he kind of likes me (although he pretends he does not). People with different ideas, political opinions, and origin. Believe me, it is not important for a guest in Israel. Because it is very simple to begin thinking about people in general and empty terms. And I do not want to do that.

So it brings me back to the beginning. I used to think about the Jewish people as some mythical folk, historical characters and important influencers for European culture. But I forgot that there are real people in Israel, carrying the legacy of the ancestors but also living their present dreams, plans, and miseries. History is a nice field of science (well, it is obligatory for me to say this as I study history) but we should not confuse it with a guideline for present life.

Israeli people have their own historical burdens but they did not forget to live. Now, it is the time for me to notice their will to live and realize that Jewish people and Israelis are more than shadows of the past. They are human beings with past, present, and future and not only actors participating in what we call history. So now I noticed you, people.

About the Author
Martin is from Czechia, a country in the middle of Europe where he studied History and Security Studies at Masaryk University. Israel became his home for five months as he is studying at Ben Gurion University for one semester now.
Related Topics
Related Posts
Comments