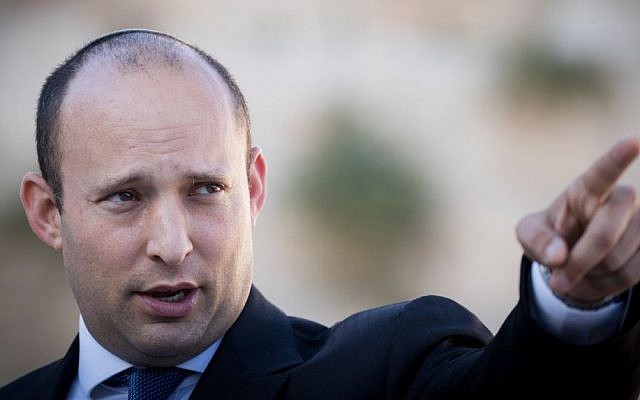 Israeli academia is in an uproar over a governmental move to curb political activism on campus, in the form of a new ethical code composed at the request of Education Minister Naftali Bennett.

The code was written by Israel Prize laureate Professor Asa Kasher, who also wrote the code of ethics of the Israel Defense Forces.

The new ethical code for “appropriate conduct” in the classroom would require academic institutions to monitor political activity on campus and to respond to students’ complaints or inquiries on political activity. In addition, it would bar lecturers from “promoting their political worldview in class.” The code also bars academic staff from taking part in, or calling for, an academic boycott of Israel, and forbids collaboration with political organizations that are considered inimical to the existence of the state.

“Absolute academic freedom – yes. Promotion of academics’ political agendas – no,” read a statement from the Education Ministry. “It’s unacceptable that students are afraid to express their opinions in class for fear for their grades, or that lecturers call for a boycott of the institution where they teach. This isn’t against any political side and anyway there is no reason for any side to object.”

But objections are nonetheless pouring in from all sides. Even those who bemoan the current lack of accountability of lecturers who foist their views off on their students aren’t entirely comfortable with the rules being laid down from above. And while attempts to suborn lecturers into acting against the interests of their own country are to be resisted, many question whether legislation is the best way of countering the phenomenon.

The battle for hearts and minds

While such dilemmas may seem a peculiar to modern democratic states, the need to regulate the battle for hearts and minds was exhaustively discussed in the Talmud. This is not entirely surprising; throughout most of Jewish history, halakhah had to be self-enforcing. “Soft power” was recognized as a force to be reckoned with. This understanding is reflected in one of the few cases where halakhah criminalizes the abuse of the freedom of speech: the law of the “false prophet” (cf. Sanhedrin 89b).

A false prophet is not one who incorrectly predicts events. Rather, he or she is someone who fails to fulfill the prophet’s political role, that of providing a check on the powers of government. Thus, a prophet who is in the pay of the king cannot be a true prophet; he or she has a conflict of interest. A prophet whose agenda differs from that of society as a whole is a danger to the coherence of society.

The false prophet and the marketplace of ideas

It’s tempting to say that prophecy is sui generis and has no counterpart in modern life. However, the law of the false prophet was later extended to support a law with a more obvious political purpose: the law of the “rebellious sage”. Once a legislative decision has been made, or a ruling voted into law, it is forbidden for a judge or legislator to openly contest the law. So long as the debate rages in the marketplace of ideas, opposing opinions are welcome; but once the majority has passed judgment, an authority who attempts to overturn the ruling may be brought up on criminal charges.

Note that both of these laws are strictures on speech – specifically on public speech, which could potentially undermine or overthrow the rule of law and order.

Interestingly enough, the Talmud groups this set of laws together in terms of severity of punishment with laws forbidding kidnapping. The common denominator is that transgressions of these laws interferes with the freedom of choice of individuals. Both the law of the false prophet and the law against contesting judgment deal with threats to the machinery of political choice. The false prophet undermines the political autonomy of a society in the same way that kidnapping undermines the personal autonomy of an individual.

The limits of law

While prophecy as an institution no longer plays a role in Jewish society, it has been replaced by other influence-wielders who play a roughly analogous role – that of serving as checks and balances on government and expressing the political and social conscience of society. Both the media and the educational system serve in this capacity.

While we can’t – or shouldn’t – legislate against any particular ideological slant, we can attempt to ensure that all wielders of influencer play by the same rules in the marketplace of ideas.

However, the fact that a particular voice should not, in the interests of society, be allowed freedom of speech does not automatically allow for that voice to be silenced by law. Just as there are limitations on speech in halakhah, so there are limitations on law. The Rambam makes a distinction between just and unjust laws: a law which singles out an individual – and by extension, a group or institution – for either reward or punishment is an unjust law (Mishneh Torah, Gezelah va’Avedah Perek 5: halakhah 14).

Thus, while Jewish law may give us an understanding of the dangers that external or partisan influence-wielders can pose to the political culture of a society, the task of dealing with offenders will best be carried out at a level below that of legislative intervention.

Whether Professor Kasher’s new ethical code for appropriate conduct in the classroom will actually pass the Council for Higher Education remains unknown. And yet, as part of a healthy market of ideas, the debate may actually be beneficial to Israeli democracy in the long term. After all, it’s a good idea to test our “democratic immune system” every once in a while, just to give it a boost!