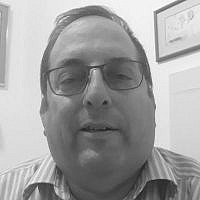 The Blogs
Yaakov Kessler
Apply for a Blog
Please note that the posts on The Blogs are contributed by third parties. The opinions, facts and any media content in them are presented solely by the authors, and neither The Times of Israel nor its partners assume any responsibility for them. Please contact us in case of abuse. In case of abuse,
Report this post.

Rarely in life have I felt helpless, today is one of those days.

No, its not the despair that I feel about not yet returning to the job I truly love — making smachot, organizing conferences and the like for people of all backgrounds. That return will come with time — even though I am “chomping at the bit”.

No, it is not the sinking feeling I have in my stomach when I observe the rapid decline of the country of my birth, childhood and formative years. Although I did leave behind family and friends and I do truly fear for them, they can and should fend for themselves and make decisions that I can not make on their behalf.

It is not even the frightening feeling I had yesterday when I viewed the video taken at the parking lot collapse at Shaarey Tzedek hospital…knowing that my daughter works just a few dozen meters away and indeed traversed that very parking lot mere hours prior (and that “there but for the grace of God” she could have been if the timing had been a bit different).

The helplessness that I feel is being here, in Medinat Yisrael, the State of the Jewish people, in the Land of Israel and hearing the filth and drivel spewed by nominal “leaders” — politicians, titular rabbinical persons and those that they have immorally influenced regarding the next government of our beloved state.

For the “People of the Book” we seem to be pretty darn stupid. It is doubly ironic that the adage, “those that do not learn from history are doomed to repeat it” seems lost on all these ostensible guardians of truth & Torah at the outset of “Shavua HaSefer — National book week”.

The Holy Temple built by King Solomon was destroyed because of a variety of sins in which our ancestors engaged; sins between Man and God. Jerusalem and the Land of Israel lay fallow for 70 years until an awakening and a return. The rebuilding of the Temple was facilitated not only by the destitute Jews of the land and the diaspora, the Second Temple was facilitated by a benevolent monarch from a distant land. And our Temple stood and we worshipped for hundreds of years, defeating our enemies when threats necessitated battle.

But alas our fortunes waned once again and this time we have been left wandering and wondering for close to 2000 years.

Our collective sin this time was senseless hatred. Hatred of our own dear brothers and sisters. The inability to see the good in others. The constant need to throw stones at our own glass houses.

The Hebrew month of Tammuz is almost upon us. Our sages tell us that Moshe — Moses our teacher destroyed the tablets on which the Ten Commandments were etched on the 17th of Tammuz, due to the sin of idolatry. Our nation paid a heavy price for complicity in this sin and were it not for the intervention of Moshe, our teacher, our leader, the enterprise that was to be the Nation of Israel would have ended almost before it started. And yet, despite this harrowing experience, we were forgiven and by the time the 10th of Tishrei — Yom Kippur rolled around a mere 80 days after the sin occurred, we were back on track; worshipping God, immersed in a Torah way of life and ready for Sukkot “Zman Simchateinu — Our holiday of joy”.

Contrast that sin to the one that occurred with the Spies on the 9th of AV. The crime? Believing the Lashon Hara — the Evil, Malicious Lies told by the Spies about an inanimate object — the Land of Israel. For that sin, our ancestors were doomed. Doomed to never enter the Land of Israel (only their offspring did), doomed to wander for 38 additional years in the desert. Our sentence for spreading lies about a stretch of unseen dirt was death. Forgiveness was granted after a period almost 170 times longer than our path to forgiveness for idol worship.

And that’s why we are still in this living “hell” of diaspora to this day. Yes, we are back in our homeland. But our minds? Our mouths? Our ears? Those are still in the diaspora. Our long exile is a result of our senseless hatred toward one another — as the Talmudic logic states: If the punishment for accepting lies about an inanimate object (the Land) was so great, “Al Achat Kama V’Kama — how much more so — should the punishment be for malicious speech against people”.

Despite our Prime Minister’s many diplomatic, economic, security and foreign policy accomplishments, he chooses to go out without a shred of dignity. Creating division in our populace through subversive pronouncements. I have never believed that the legal cases pending against him were anything but political hack jobs. But his behavior over the last two weeks is disgraceful.

The pillorying of Naftali Bennet for having “lied” that he would never sit in a government with Yair Lapid is an example of pure loathing against someone who has bested the Prime Minister on the playing field of Netanyahu’s own design.

The Hareidi leadership screaming about holy war and declaring Naftali Bennet to be a “Reform Jew” who should remove his kipa says way more about them that it does about him. A dear friend once taught me that when pointing a finger at someone, one should always remember that there are three fingers on the same hand pointing right back at the one doing the pointing.

To say nothing of the “leadership of the National Religious Party” — and perhaps it would be best to say nothing, lest I unbridle my rage at people who should know better, people who are supposed to represent the best and the brightest, but seem to have turned to the dark side themselves, forgetting the essence of the teachings of Rabbi Akiva, “Love you FRIEND as you would yourself”. Your friend, the one who occupies the same look, background and headspace as you. Your friendly “competitor”. That is who you are supposed to love.

Will this new government be effective? Will it really do the job? Will it help bring the nation together? I do not know. These are lofty goals. I do know that the naysayers have revealed an ugliness that perpetuates our Galut.

I am reminded of a comedy sketch by George Carlin. In it, he discussed how he really gets upset with ecology activists. Their self-righteousness is in actuality hypocrisy.” The earth has been around for eons, it has survived sunspots, ice ages, major natural disasters etc. We humans have lived for mere speck of time in relation to the world and we think that some Styrofoam cups are going to cause the end of the world? Where is our humility? Where is our sense of proportion? Where is our belief in God?”

Maimonides compiled the famous 13 “beliefs”. The very first one is our belief that God, our Creator, is the Director of all creation and He, Alone did, does and will do all things. God controls the world.

There: I don’t feel helpless anymore.

About the Author
Yaakov was born in the USA and made aliyah in 1995. After many years of ownership in a series of businesses, today he happily works as the Events Manager for a major Jerusalem hotel.
Related Topics
Related Posts
Comments