No, this is not another rant on the mental health of @POTUS. Just the opposite: I believe that President Trump is not only sane, but intelligent and prudent. He is learning to make the transition from savvy business meetings to maneuvering through the DC swamp (I say lovingly). He is taking on long-believed mantras and creating new realities.

On Israel, we tend to expect nothing less than our own Likud politics to lead US policy. Our Israel-centric tunnel vision makes it seem quite clear that there is no influence other than our collective belief in what’s right for the Jewish people. And yes, often that is also what’s good for the US, but not always.

I spent Jerusalem Day with my family – the kids wanted to see the spectacular, historic light show that kicked off the celebrations on the walls of our ancient city. As we dressed like the flag (blue and white) and waved little flags (blue and white) we gawked, ooh’ed and aah’ed at the 100 drones flying in unison to form the lion, symbol of Jerusalem, the Jewish star and yes, to spell out 50. The next day we ‘conquered’ the city on foot, joining the crowds in enjoying a parade uniting all parts of the city and the people of Israel. 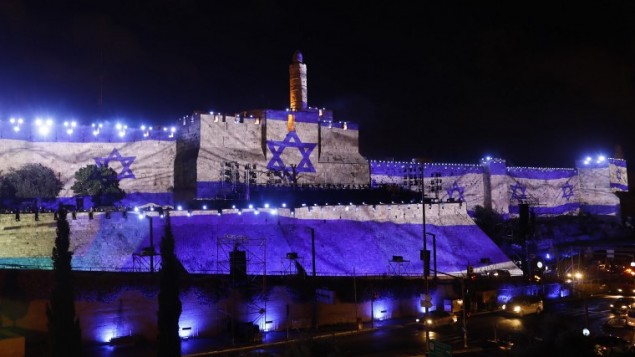 Maybe we were wrong in emphasizing a jubilee for Jerusalem. This city, with more than 3000 years of Jewish significance, cannot be reduced to modern-day terms. Yes, it is historic for three major religions, and sure, it is a beacon for many. But have no doubt – it is ours. Only the Jewish people have prayed facing Jerusalem while in exile for over 2000 years – America doesn’t even have that long to claim they’ve been doing anything! Only the Jewish Bible mentions Jerusalem hundreds of times, while the Koran is hard bent on showing one obscure reference as possibly that of Jerusalem.

So why all the tumult? That’s just it. The people of Israel have returned to their land. And not everyone is happy about it. My children were born in a free, united Jerusalem, capital of our precious modern state. Their birth certificates say something that their great-grandparents would never have believed. So, the US birth certificate says Jerusalem and won’t add Israel as the country. An affront to our identity as an independent state? Certainly. But one I can live with, because Jerusalem is in our blood, and in our hearts, and now under the very feet we walk with each day.

We danced and celebrated with the colors of our flag, flying freely over a city that for the first time in thousands of years can celebrate freedom for all; access to religious sites for absolutely everyone (except nonMoslems on the Temple Mount). The First Lady and her daughter (Yael!) shed tears at the Kotel, the Temple’s Western retaining Wall – one of few precious accessible remnants of our rich past, of a people who made Jerusalem their capital.

So as June 1st comes and goes, and President Trump probably signs the waiver – the US will have to admit shamefully that its embassy will not yet move to Israel’s capital city. We respectfully wait, with patience, for three to four months as we’ve been asked. We understand there is good will, and a need to keep promises, as real men do. And so we wait, dancing with our flags in the streets, with our Jerusalem-born children and our pride intact.

But you’ve only got a few months, so let’s get going.