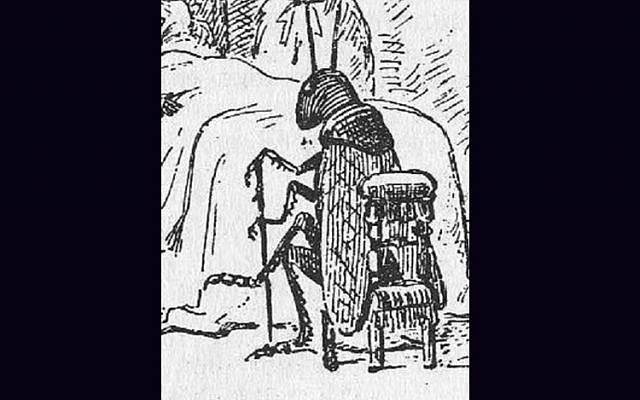 An illustration of The Talking Cricket by Enrico Mazzanti from 'Le avventure di Pinocchio' (The Adventures of Pinocchio) by Carlo Collodi, 1883. (Wikipedia)

Walt Disney did a great disservice to fairy tales. In his desire to put a “spoonful of sugar” into them, he dismantled the original stories. After all, how many children would have wanted the real ending of The Little Mermaid?

To me, one of his most egregious edits involves Jiminy Cricket. In the original Pinocchio, Jiminy is killed — but we’ll come back to that.

I remember the overwhelming response to the 2013 report, which devastated the liberal denominations. While overall Jewish identity seemed stable, identification with the Reform, Conservative, and Reconstructionist movements was falling.

The denominations responded aggressively. They were aware of the “challenges” and declared themselves uniquely positioned to combat the issues of the day. “Don’t worry, we’ve got this!” seemed to be the response.

The demographics of the liberal denominations are getting worse. To be clear, this is not new. These issues are the result of decades of change that the pandemic only served to accelerate.

Liberal denominations are at risk. One (and only one) sign of this is in the consolidation of the denominational organizations, as they have “reduced in force” their employees and cut budgets and costs.

But the silence meeting the latest Pew report is deafening. While it seems that every Jewish paper reported the findings, it has evoked tepid response from the movements.

In the original Pinocchio, Jiminy Cricket is murdered… by Pinocchio. No one likes a Jiminy Cricket, nor does anyone want to hear what he has to say. Ironically, the same fate befell most of the biblical prophets. According to our tradition, most were killed either by the king or the people.

I don’t believe that denominational Judaism will disappear — but it is changing and will morph into something we have yet to identify. Now is the time for leadership of the movements to work aggressively with congregations to save what is most valuable and start experimenting with new forms of expression and inclusion.

My congregation’s response to the first Pew report was typical. We discussed its findings and it generated heated discussion. The prevalent opinion: “All we have to do is get people into services and they will see how warm and inclusive we are.”

First, you can’t get people into a brick-and-mortar institution when they don’t want to come, and inclusion means including them and meeting their needs, not showing them how “wonderful we are.”

The opposing point of view was that we had to discuss and implement new forms of communication and programming. We had to learn how to listen to a demographic that was not interested in talking. We had to be willing to leave the walls of the congregation, to look outward and be willing to innovate and “lean into” our discomfort if we were to have a chance to grow.

The problem is that leadership is comfortable with the status quo and rarely wants to change, because change brings new leadership, which threatens their positions.

My interpretation of this latest Pew report is that, whether change comes to the liberal movements or not, the system itself will self-correct, because in 10 years, 62 and 53 will be 72 and 63.

Change will come. The question is do we want to be proactive and seek to direct these trends and demographics? Or will we be reactive and doomed to respond to forces we foolishly thought we could control?

About the Author
Rabbi Steven Bayar is Founder and Executive Director of JSurge, an organization providing Jewish education and services to unaffiliated Jews. Ordained by the Reconstructionist Rabbinical College, he is Rabbi Emeritus of Congregation B’nai Israel in Millburn, NJ, where he served the pulpit for 30 years, and teaches at the Golda Och Academy in West Orange, NJ. He is a member of the Rabbinical Assembly and Rabbis Without Borders, and has trained as a hospice chaplain, a Wise Aging facilitator, and a trainer for safe and respectful Jewish work spaces. He’s the co-author of “Teens & Trust: Building Bridges in Jewish Education,” “Rachel & Misha,” and “You Shall Teach Them Diligently to Your Children: Transmitting Jewish Values from Generation to Generation.”
Related Topics
Related Posts
Comments
Advertisement