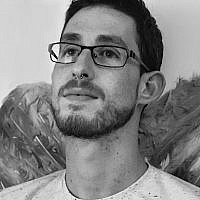 The Blogs
Ethan Dvir
Apply for a Blog
Please note that the posts on The Blogs are contributed by third parties. The opinions, facts and any media content in them are presented solely by the authors, and neither The Times of Israel nor its partners assume any responsibility for them. Please contact us in case of abuse. In case of abuse,
Report this post.

The Olympics. An event dedicated to athleticism, hard work and good sportsmanship. An event that grants us the option to compete in a friendly way without taking our world’s borders in consideration. That is, until nationalities and racism are forced down our throats once again. When Egyptian judoka Islam El-Shahaby lost to his Israeli counterpart Ori Sasson he refused to keep up with the Olympics “good sportsmanship” ideals. After winning the battle Sasson offered a respectful hand-shake between two athletes who just gave it their all but EL-Shahaby refused to reach out his hand. After walking (pretty dramatically if you ask me) off the mat area El-Shahaby was called back by the referee in order to bow and was met with an angry crowd. A few hours later he announced his judo career is over.

I can not understand how an athlete who worked so hard his whole life would throw everything away because of sheer racism. We can sugar coat it, we can say it’s complicated and that the relations between the two countries came between those two individuals but at the end of the day Sasson reached out his hand in respect and good will just to receive the most disrespectful response he could. If the countries relations were the reason for this response would Sasson even extand his hand in peace? We can try to sugar coat this whole situation but we would have to deal with the truth at some point, and the truth is that this was an act of hate.

In my last visit to New-York city I spent my nights in a hostel with other tourists just like me. One night we went out for a beer and a new resident of the hostel joined us. When I went outside for a quick smoke that new resident followed and stood right next to me when we lit our cigarettes. Our conversation was abruptly cut when he found out I’m an Israeli. He was Turkish and could not handle the fact that he just made friends with someone who comes from a country he can not even stand to call by its name. That’s when I stopped trying; I stopped reaching my hand out, I stopped trying to include him in my conversations and I pretty much just stopped caring altogether. The following day someone started blurting out racial slurs in the hostel and before I even got the chance to speak that Turkish resident came to my defense. He stopped that person from continuing their rant and then stood up, offered me a cigarette and shook my hand. He asked for forgiveness. He asked me to understand that it was hard for him to put all of the hate aside and see me as my own person. I took his offer, and his cigarette, and forgave him for whatever feeling he made me feel the other day. Bottom line was that he understood that we were just two people brought together by a coincidence to the same hostel, not two enemies colliding in battle.

And what about El-Shahaby? Well, that is a whole different story. He doesn’t understand yet that Sasson and him were just two people brought together by the love of the sport. He doesn’t understand that good sportsmanship doesn’t have to be put on hold for the sake of dark politics or hate. He doesn’t understand all of that but it’s his problem. We don’t have to feel guilty, or ashamed. It’s our obligation, reaching out even to someone as filled with hate as him, and it’s our pride that we do so. We should take pride in this act of friendship even if it didn’t work out the way we wanted it to.

Well-done Ori Sasson, and thank you for letting us be a part of your dream of becoming an Olympic medalist.

About the Author
Ethan is a 22-year-old guy living in southern Tel-Aviv, working in northern Tel-Aviv and writing in central Tel-Aviv: You can say he travels a lot.
Related Topics
Related Posts
Comments