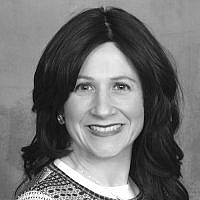 The Blogs
Adina Morris
Be a Leader & Influencer for yourself, your family and your community
Apply for a Blog
Advertisement
Please note that the posts on The Blogs are contributed by third parties. The opinions, facts and any media content in them are presented solely by the authors, and neither The Times of Israel nor its partners assume any responsibility for them. Please contact us in case of abuse. In case of abuse,
Report this post.

As children, we learn about different biblical personalities. The three Avos, the Patriarchs, and the four Imahos, the Matriarchs are the foundational characters. Among others, there are prophets, prophetesses, priests, judges, kings, queens and their royal families. Heroes and heroines abound, as well as, antagonists. Each personality leaves a legacy for us to emulate or  despise.

And then there are supporting characters who ultimately make a significant contribution to the story of our people.

In the two Parshios of Lech Lecha and Vayeira we read about Avram and Sarai and their travails. And then we are introduced to Hagar.

In my child’s mind growing up, I always considered Hagar similar to Vashti or any other female antagonist in Tanach.

However, when I was reading through Parshas Lech Lecha last Shabbos I gained greater insights into Hagar and what might have been. I would say she is more of a tragic character synonymous with a lost opportunity, who then is given a second chance.

You see, the Medrash states that Hagar was an Egyptian princess. She was the daughter of Paroh. When Avram and Sarai came to Canaan at Hashem’s command, after living in the land for some time, a famine broke out and they went down to Egypt.

While in Egypt, Sarai was abducted by Paroh and then Hashem punished Paroh and all the people in the palace until he would return Sarai to Avram. Paroh immediately returns Sarai, recognizing her holiness, sending them on their way with much wealth. The Medrash teaches us that upon their departure, Paroh gives Avram his daughter as a maidservant, explaining that she would be better off living under the influence of Avram and Sarai, than remaining in the palace as a princess.

Ten years pass and Sarai,  remaining childless, becomes despondent. Recognizing Hagar’s potential, Sarai tells Avram to take Hagar as a wife in order to bear a child that she, Sarai, will then raise.

Avram listens to Sarai and Hagar conceived immediately. Upon Hagar recognizing that she is pregnant, her respect for Sarai diminishes. Because Hagar, the lowly maidservant immediately conceives with the holy Avram, and the holy Sarai has not, even after many years. According to the Radak, Hagar loses the sense of her place as the maidservant, and resumes her position and attitudes as a princess believing that she will now be the main wife of Avram, as she is the mother of his child. She does not seem to learn kindness and giving, character traits that Avram and Sarai represent. Rather she usurps her position for her own gain. This change in events aggravates Sarai and she complains to Avram.

He tells Sarai to do as she wishes. According to Hamek Davar, Avram responds that he sees Hagar as his wife and will not mistreat her. However, Sarai is her mistress, and if she feels Hagar has overstepped her bounds, she may address the matter.

Hagar becomes distraught over Sarai’s reprimands and flees. An angel hears her cries and tells her to return to Sarai and submit herself as her maidservant, as she was intended to be. She is comforted with the promise from the angel that she will have a child with Avram. The angel instructs her to name her son, Yishmael.

We see Hagar return and have a child that Avram names Yishmael. Thirteen years pass, and we do not see Sara raising Yishmael. In this week’s Parsha of Vayeira, we see that Sara is finally blessed with her own son, Yitzchak. Rashi states that in characterizing Yishmael’s interactions with Yitzchak, Yishmael is a wild man. And instead of Sara influencing Yishmael, we see that Yishmael is a bad influence over Yitzchak.

What happened? Hagar came with such potential! She was to learn from the best of the best and given the opportunity to be a surrogate for Avraham and Sara! But it just wasn’t enough for her. She wanted to be more than the maidservant and surrogate. But that is not what Hashem intended her role to be.

After being sent away, Hagar then separates herself from Yishmael not wanting to watch him die. An angel again appears, and the Torah emphasizes that this time it is not in Hagar’s merit, rather due to the crying of Yishmael. The angel shows her the well of water, and tells her to take care of Yishmael and a great nation will rise from him.

Hagar forfeits the opportunity to live with her child under the influence of Avraham and Sara. Therefore, she is given a new role and her life takes on a new trajectory.

And that is the last we hear of Hagar, barring when she selects a wife for Yishmael from Egypt.

What is interesting to note, is we see another princess from another country also attach herself to a holy woman. But in this case, she recognizes her role and place in the story. And she is richly rewarded.

She is none other than Rus Hamoavite. She is the princess of Moav who marries the son of a distinguished family from the tribe of Yehuda. The distinguished man, Elimelech, takes his family to Moav, leaving Israel, abrogating his responsibilities to the Jewish people facing famine in Israel. There his two sons marry two local Moavite princesses, Rus and Orpah.

When Rus’ father-in-law, husband and brother-in-law all die due to their sins, leaving her bereft and penniless with her mother-in-law and sister, she refuses to return to her homeland and family. Rus insists on standing by her righteous and holy mother-in-law, Naomi. Rus learns from Naomi and prefers staying as a penniless and shunned Jew than returning to a life of wealth and luxury as a Moavite princess.

Not only that, Rus becomes the surrogate for her mother-in-law to have a child to bear Naomi’s son’s name and continue the family chain. Naomi, her mother-in-law, raises Rus’ child as her own. Rus gives him up to her, recognizing her role and place in the story. She learns from Naomi and sees her greatness and clings to it, for a life of Torah and Mitzvos was worth more to her than all of the wealth and power in the world.

And what is her reward? She becomes forever known as the Great-Grandmother of King David and begins the everlasting Davidic Dynasty from whom Mashiach will come.

What was the difference between Hagar and Rus? How did one become a negative supporting role and fade into the background of history and the other become known for all time as the mother of Mashiach Ben David?

Rus is known for her devotion, kindness and her humility. Asking nothing for herself, only what she can do for her holy mother-in-law. Where does Rus get this humility from? The Gemara states that her grandfather, King Eglon of Moav, stood up for Hashem and recognized His greatness. Because of King Eglon’s humility, Hashem promised that he will have a descendant that will be the mother of the Davidic Dynasty. Rus is his descendant. She learns that trait of humility and she recognizes Naomi’s greatness and chooses to know her place and role. And her reward is immeasurable.

In Sefer Daniel, King Nevuchadnetzer of Bavel, destroyer of the first Temple, has a dream. Daniel comes before the king as the only one able to interpret his dream. Daniel explains to him that G-d is telling the king that he needs to learn humility before G-d. That all of the king’s accomplishments are not due to his own might, rather due to Hashem allowing him to succeed, as part of Hashem’s plan. The king finally learns his lesson and proclaims Hashem as the G-d of all and that only G-d runs the world.

Unfortunately, King Nevuchadnetzer’s son/grandson (depending on the commentary) Balshatzar, does not learn the lesson of humility and as a result loses his kingdom.

Hagar came from Egypt with great potential and hope, just like Rus. Unfortunately, Hagar did not learn from Avraham and Sara the lessons of humility, kindness, and giving. She, therefore, loses out on becoming a positive role model for the Jewish people.

Unfortunately, we are not given a script to follow during our lifetime. Our job is to lead a life cognizant of G-d and all that He does for us, to be kind and caring to others and walk humbly with the knowledge that G-d has a special role unique to each and every one of us and our individual personality and character traits. We must work to discover, accept and embrace our special G-d given role in order that we reach our potential and fulfill our purpose in this world. In this way, with G-d’s help, we will not miss any opportunities, and walk in the ways of our true heroine, Rus.