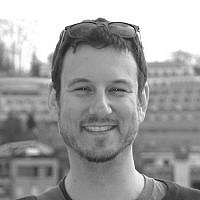 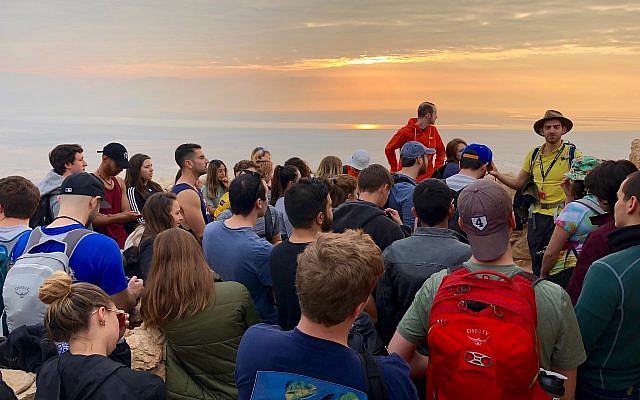 My most recent Birthright Israel group at the top of Masada, December 2018

Dr. Ariel Levinson’s thoughtful piece on invigorating the relationship between American Jews and Israelis gets a lot right (“Changing the conversation”). He is absolutely correct that young American Jews need to spend more time with their Israeli peers and vice versa; that there is a core group of like-minded individuals dedicated to the creation of pluralistic Jewish culture in the context of Jewish democratic society. These two pillars of Jewish life ought to meet, collaborate, and inspire as much as possible. In my experience, Birthright Israel is a phenomenal place to begin that relationship.

I take issue with Dr. Levinson’s cheap shot at Birthright Israel’s mifgash (encounter) program between Americans and Israelis. In his words, “most of the time on Birthright programs is spent passively listening to ‘expert’ lectures and meeting soldiers with whom they exchange more fluids than words, opinions, and ideas.” Really, “more fluids than words”? Oy.

I have led 545 young professionals (ages 18-26) on more than a dozen Birthright Israel trips over the last five years, and I can assure Dr. Levinson that, in fact, dramatically more words, opinions, and ideas are shared than “fluids.” I’ve seen many more genuine friendships emerge than the kind of one-off romantic entanglements that Dr. Levinson imagines. Sure, “hookups” happen, as they would in any situation in which a large group of people are thrown together for an intense and exciting experience. But to dismiss Birthright Israel as such, which Dr. Levinson doesn’t “dispute…shapes and strengthens the connection between young Americans and Israel”, is to diminish the very genuine effort that both Americans and Israelis put into opening up to one another in the spirit of learning, unity, and amity.

In my experience, the Israelis — both soldiers and students (as not all Israeli participants on Birthright Israel trips are on active duty) — are as fascinated with American Jewish culture as the Americans are with Israel. Israelis can have a hard time grasping the very different life of American Jews as a minority in which their religion is not also their nationality, and in which proliferates a huge range of practices, traditions, observances, and interpretations. Sometimes those conversations are light and funny; other times I’ve seen people on both sides get heated and cry in frustration. They always quickly reconcile, and thanks to those encounters develop a strong emotional bond that I have seen persist for years after the trip.

One time I had a participant who just weeks before the trip had lost a sibling. At one point she struggled to articulate her emotions and was unable to speak about her loss. One of the Israeli soldiers, who had recently lost three of his closest friends in combat, hugged her and said “I know what it’s like to lose a brother.” There was no romantic follow-up between them. But in that moment was a profoundly authentic connection that I’ll bet forever altered their conception of one another’s milieu.

It is true that during the daily itinerary, on balance, there is a great deal of time listening to lectures, whether from experts or, more often, the tour educator leading site visits. But at night it’s a very different story. When I first started leading trips I worried that the participants were “wasting” their evenings by drinking, hanging out, and posting on social media. When I later complained to one of my participants, she said, “C’mon Jason, what do you think we’re talking about at night?! Just because we’re out having a beer doesn’t mean that we aren’t also talking about what we did that day, and hearing about each others’ Jewish lives.” I soon learned that most of the “words, opinions, and ideas”-sharing takes place away from the prying ears of the trip leaders.

In reducing Birthright Israel to an insider-y joke about sex and partying, and therefore dismissing the incredible value of that first encounter between Americans and Israelis, Dr. Levinson unfortunately advances the very problem he is looking to solve. Certainly the divisions between American Jewry and Israel go deeper than can be fully addressed by Birthright Israel’s short, 10-day program. But you need to start somewhere. The few days that Americans and Israelis get to spend with each other is not intended to be the sum total of that relationship but the beginning. Peter Fox already did an excellent job taking down the myth of Birthright’s falling numbers in the face of political partisanship. But if there is a diminishing interest in Birthright from young people, is perhaps part of the reason because leaders in our community intimate that Birthright is a party scene, and so ought not be taken seriously?

The Bina Secular Yeshiva is an extraordinary organization and Dr. Levinson is a terrific educator. He truly gets something essential: that there needs to be more meetings between young Americans and Israelis “similarly inquisitive about their Jewish identity in a changing world,” and that “through these encounters, empathy, solidarity and mutual caring can emerge.” I have seen it time and time again on Birthright Israel. It’s just the beginning, but what an inspirational beginning it is.