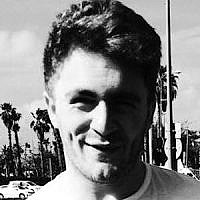 The Blogs
Jamie Herman
Apply for a Blog
Advertisement
Please note that the posts on The Blogs are contributed by third parties. The opinions, facts and any media content in them are presented solely by the authors, and neither The Times of Israel nor its partners assume any responsibility for them. Please contact us in case of abuse. In case of abuse,
Report this post.

We’re all a product of our communities, right? So how on earth how did I become a Movement Worker for a progressive Youth Movement?

My earliest memory of the start of my relationship with Israel was at the age of 4 in Primary School – I was asked to count the number of seeds in a Pomegranate in order to check whether there were in fact 613 of them. However, the fact that I couldn’t count past fifty at the time – this wasn’t a fruitful exercise. Ignore the pun.

High School provided me with the first chance to go to Israel. I went on an organised school trip and had the time of my life. We rode bikes in the Golan, we picked fruit off historical fields, danced at the Kotel and were aggressively forced to drink 16 litres of water each day by a bearded Israeli man named Nadav. Two Israel trips during High School were enough for me to return home with an IDF hoodie and a ‘Superjew’ T-Shirt; it was safe enough to say that I was connected to my Jewish Homeland.

Israel Tour arrived and so did my introduction to the next chapter of my life, Habonim Dror. I won’t bore you with the usual rhetoric surrounding Israel Tour “It changed my life etc etc”, the truth is, it didn’t. I did have a bloody great time though and it allowed me to see Israel as a country, rather than the ‘Land of Milk and Honey’ as it was portrayed on my previous trips with my school.

I returned from Israel Tour and became a Youth Leader in the local Habonim Dror Ken (Weekly Meetings). I bobbed along in my little Youth Movement, led summer camps and ended up on a kibbutz in the North of Israel during Shnat 10/11 (Habonim Dror Gap Year). Fresh off the back of A-Levels and fourteen years worth of education in an Orthodox Jewish School, I viewed Israel in a very similar light to how I did when I was fifteen, dancing in the streets of Jerusalem during Yom Yerushalayim.

I had the same pre-conceptions as any other Conservative, middle-class Jew: what was all this hype about Israel getting such bad press? It must be cos’ we’re Jewish. Arabs can vote here and we drop leaflets on peoples’ houses during war– why can’t everyone just leave us alone?

Shnat provided me with a great insight into Israeli life. The opportunity to live side-by-side with Israelis, work in Israeli schools with Jews and Arabs and explore the State of Israel freely was enough for me to want to stay involved in my Youth Movement and provide future chanichim (participants) with the chances that I had been so fortunate to have been a part of.

So here I was – a nineteen year old shnattie (Shnat graduate) with an immeasurable love for Israel, who had had incredibly different experiences whilst being there. Which one was right?

It was then when I became a Movement Worker that everything just started to make sense.

I recognised that whilst my connection to Israel was strong, pure and impenetrable, I didn’t feel equipped with the necessary tools to actively engage in debate and discussion in regards to Israel. I had been locked in an echo-chamber for twenty-one years of my life, and not only was I unable to engage with opposite and nuanced perspectives, but I also had no clue how to make an active difference to my country and shape it to become the Israel that I am proud to call my homeland.

And it is with reference back to the concept of ‘Hug and Wrestle’ that I leave with you some thoughts.

My love for Israel and all that is great about it is integral to my existence as a Zionist – simply, someone who believes in the right for a Jewish State to exist in the State of Israel and wants to see it flourish. However, whilst incredibly important, it isn’t a sustainable recipe for consistent engagement with Israel both now and in the future. Whilst hugging is important, it is imperative that we are able to wrestle with the Israeli flag too – to critically analyse, identify flaws and draft solutions to rectify.

If we continue to educate young, Jewish Zionists that the only way to love and connect with Israel is to act as staunch defenders of the state and to rest on our laurels purely  as a consequence of Israel’s existence, then we face another half century of increased ignorance, increased death tolls and increased Anti-Semitism and Islamaphobia.

If we continue to isolate and demonise young Jewish Zionists and label them as ‘Anti-Zionist’ because their love for Israel is so strong that they are willing to address ills of Israeli policy, then what chance do we have of inter-community progression if there is intra-community recession?

About the Author
Jamie Herman is a 23 year old Law Graduate bobbing in and out of Manchester and London whilst working for Habonim Dror UK. He has a strong interest in Zionism, Informal Education, Football and Food. Read his blog for a fresh, humorous and nuanced perspective on all things Jewish and Israel.
Related Topics
Related Posts
Comments