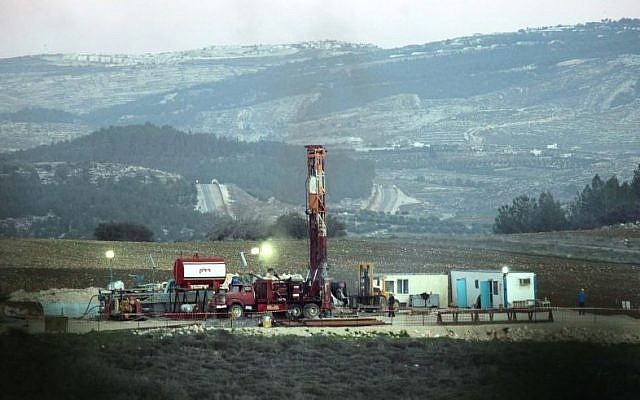 Illustrative photo of exploratory oil drilling near the village of Aderet near Beit Shemesh on Jan 6, 2010. (Photo credit: Yossi Zamir/Flash 90)

A burgeoning oil bonanza in the Golan Heights could be paving the way for China to strengthen its role as a peacekeeper in the troubled region, while at the same time smoothing the way for its Belt and Road Initiative.

Since regional stability is key to China’s continued access to Mideast energy sources and to push forward the BRI, Beijing is stepping up efforts to help resolve the Syrian crisis and the Israel-Palestinian conflict. It is becoming more proactive in supporting a negotiated political settlement in Syria, proposing a trilateral dialogue among China, Israel and the Palestinian Authority, and moving ahead with regional infrastructure projects in Syria, Jordan and Israel – where it will be importing 20,000 infrastructure workers.

China is thus becoming a de facto regional stakeholder in the Middle East, as it is increasing resources to protect its growing portfolio of assets and citizens there. In July it deployed its first batch of troops to the new naval base in Djibouti to augment its ongoing United Nations peacekeeping presence in South Sudan (UNMISS) and Lebanon (UNIFIL), has offered 8,000 peacekeeping troops on permanent standby to conflict zones, and may join the Golan’s UNDOF in the future.

In November 2015, Afek Oil and Gas, a subsidiary of the US company Genie Energy, discovered an oil bonanza in the Golan Heights “with the potential of billions of barrels”. In an interview with Israel’s Channel 2 News, Afek chief geologist Yuval Batov said the layer was 350 meters thick, which is 10 times as large as the average oil find worldwide.

Genie Energy managed to obtain exploratory licenses despite opposition from environmental and local groups. These groups were concerned that drilling could pollute the largely unspoiled Golan countryside and the Sea of Galilee below, the source of most of Israel’s drinking water.

Indeed, there is still an ongoing debate over which is more important to Israel, access to water or energy independence, as spelled out in a recent analysis at the Begin-Sadat Center. Moreover, the quality, quantity and cost-effectiveness of extraction are still unknown, while other legal and planning battles await.

However, the biggest problems revolve around the issue of sovereignty.

Israel annexed much of the Golan in 1981, but the heights are still regarded internationally as illegally occupied Syrian territory. In the past, Israel’s leaders have offered to pull back from the Golan, which  was captured in 1967, in return for a comprehensive peace treaty with the Syrian government. However, any such deal has been ruled out since Syria began disintegrating in 2011, and now there are efforts to demand recognition of Israeli control of the 1,200 square kilometers it occupies on the Golan.

Israel’s defense of the Golan intensified in June when it was caught in the crossfire between the Syrian Army and armed opposition forces in that country. After a mortar shell landed in the Golan, the Israeli Air Force attacked Syrian Army positions in the village of Samadanieh al Sharqiyah in Quneitra province. Israel also supports a rebel group called Knights of the Golan as a buffer force to keep the Syrian Army and Iran-backed Hezbollah at bay, adding to the complex and delicate environment in which Genie Energy needs to navigate on the Golan.

Nonetheless, there is another potential oil bounty that is within Israel’s territory and has escaped much media attention – Zion Oil & Gas’s exploration of the Megiddo-Jezreel Valley.

Since 2005 Texas-based Zion Oil has been drilling near Haifa for potential 484 million barrels of oil, which geologists confirmed in 2004 to contain Triassic oil and gas fields.

On November 6, 2015, Zion Oil announced the public release of a resource assessment report, with estimated prospective recoverable oil volumes ranging from 20.7 million to 234.6 million barrels. If a discovery is made, the “best estimate” for recoverable hydrocarbons is at 69.7 million barrels.

Add to this the offshore natural-gas fields of Leviathan and Tamar in the Levantine basin, and the newly discovered oil and gas bounty could enable Israel to become an important energy exporter not just in the region, but also to Asian markets such as China and India.

Interestingly for regional actors such as Syria and Israel, Chinese UN peacekeeping troops may be more acceptable in the Golan, given that in 2006 Beijing sent 1,000 troops to Lebanon at the request of the Israelis. This is because Israel did not want Arab troops on its border, and preferred Asian troops from China, India, South Korea and the Philippines, as they were deemed to be more impartial in the Arab-Israeli conflict.

Chinese reinforcements in UNDOF (the United Nations Disengagement Observer Force) may thus also serve as a confidence-building and effective buffer force between Israel and Syria in the Golan Heights, given China’s good relations with both sides, and perhaps provide a testing ground for constructive US-China relations in the Mideast, with eventual joint benefits of the new oil bonanza.